India is fast outgrowing the sub-Rs 10,000 segment, at least that’s what one recent report would have us believe. And while it may not be the most conclusive report, we can tell from the products that get the biggest hype – the fluid mid-range segment ranging from Rs 12,000-Rs 15,000 in pricing, more or less. But Samsung is convinced the sub Rs 10,000 segment still has legs and is hedging its bets with the Galaxy M series.

The Galaxy M10 should make Samsung’s rivals worry. For the first time in a long time, Samsung has had to dig deep to arrest its slide in India. The Galaxy M10 can very well stop it; it could lead to a second coming for the brand, many label as aging and boring. 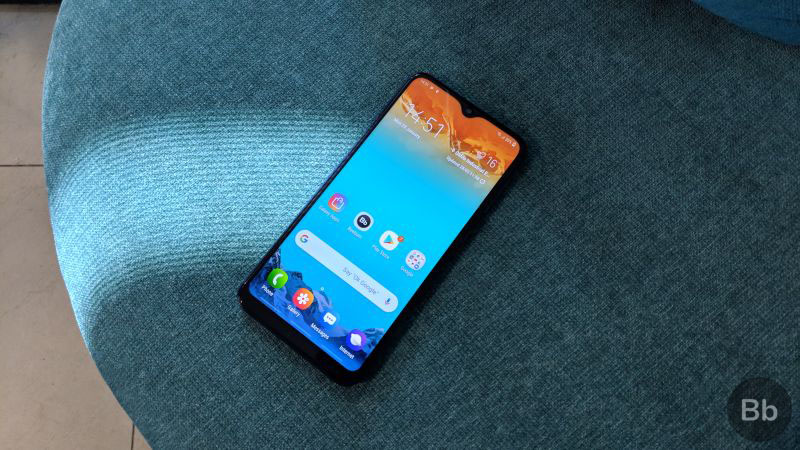 At first glance, the M10 fits that label but Samsung has priced it enticingly, which is the biggest deal about this phone. Starting at Rs 7,990, the Galaxy M10 competes with the Realme C1 (2019) and the Redmi 6 in India. The 3GB + 32GB variant is priced at Rs 8,999 in India. Both those phones are serious competition with Realme’s momentum and Redmi’s market standing, while Samsung has the pedigree of a premium brand with its after-sales service network. Does the M10 have enough to give them a tough fight? Let’s find out:

Before we get started on our initial experience with the M10, here’s a look at the specs:

There are some notable omissions such as the lack of a fingerprint sensor, which does make the M10 seem less appealing. And we’ll see if it that impacts user experience negatively. 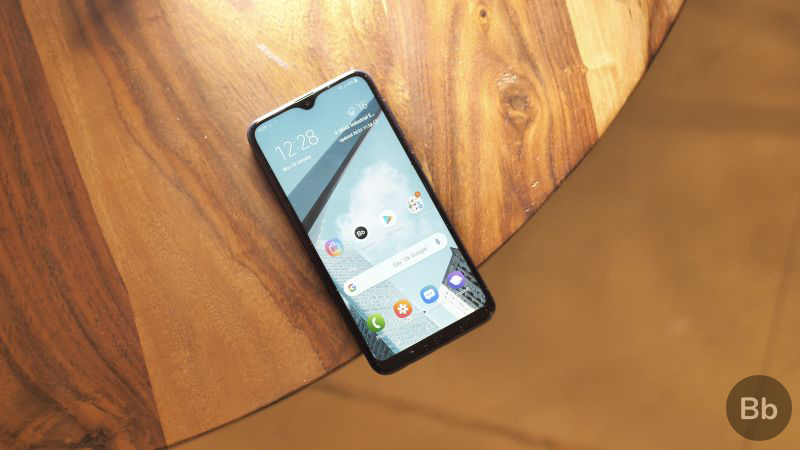 The M10’s retail package is rather spartan. The box doesn’t look like it contains much and that’s pretty much true, but it’s also expected given that this is a budget phone. This is what you get inside the box: 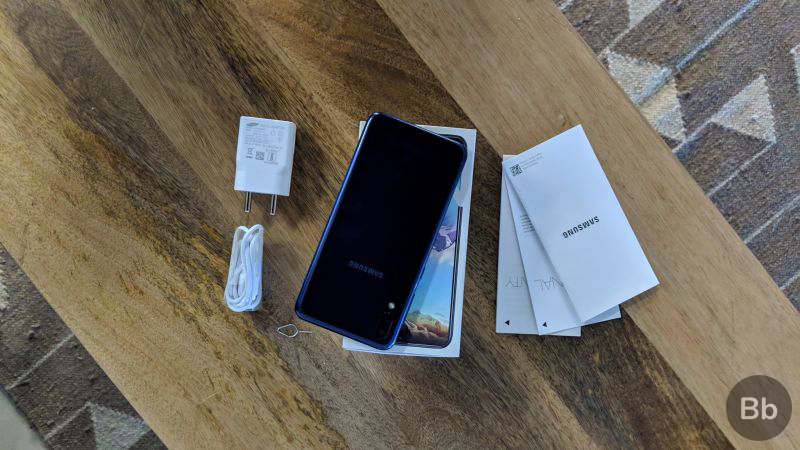 It would have been great if Samsung had thrown in a clear Silicone or PVC case along with the phone to keep the plastic back free from scratches.

The Galaxy M10 has two stark design qualities that seem incompatible and half-thought at first glance. Let’s start with the front, which has that trendy teardrop notch, which the company calls Infinity-V. It’s the first time we are seeing a Samsung phone with a notch and it is less intrusive than most notches in this price segment. The screen to body ratio of the M10 is a healthy 81.6 % which is higher than the Realme C1 and Honor 9N, both phones with notches in this price range. 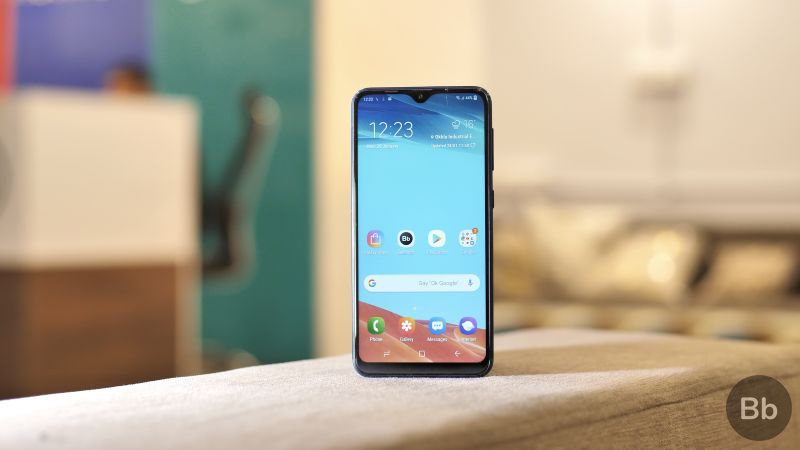 The all-glass front picks up fingerprints rather easily, and cleaning the panel turns into an hourly ritual. The notch and the slim bezels on top and the sides give the phone an unmistakable modern identity. The notch holds the 5MP front camera, which is also used for face unlock. There is the so-called chin and it’s pretty thick, relative to the top and sides. I don’t quite love the look, but it’s definitely a step above the competition. 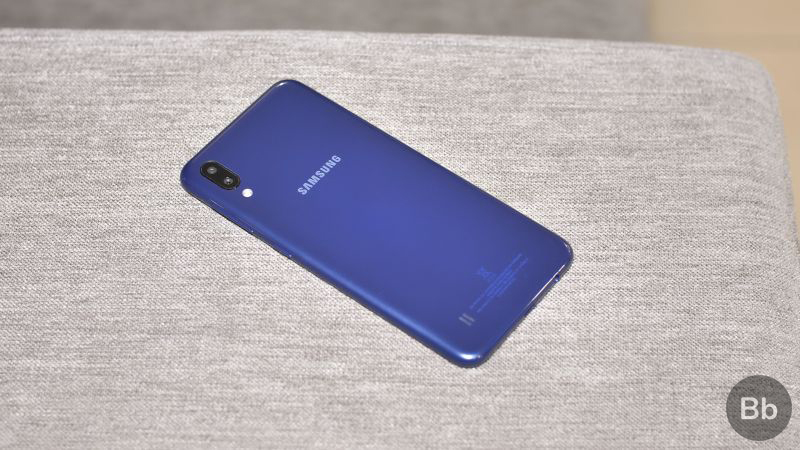 That modern look is in stark contrast to the polycarbonate rear as I mentioned in the beginning of this section. The overall look of the rear seems years old, thanks to the lack of a fingerprint sensor. The only thing that hints at this being a 2019 phone is the dual 13MP+5MP (ultra-wide) camera module, which have become oh-so-common even in the budget segment. We have the Ocean Blue variant of the phone and the glossy plastic back doesn’t really have a premium feel. It’s a budget phone and it definitely feels like one as far as the back is concerned.

The sides of the phone are plastic too, since the back wraps around the side for a monolithic look. The glossy treatment on the sides starts looking dirty as soon as you use the phone for a few minutes. The left side has the SIM slot, while the right has a clicky power button below the volume rocker. You will find the 3.5mm headphone jack on the bottom, along with micro USB port and the speaker holes.

The plastic build means handling the phone is easy and there’s no real sharp edges to be worried about. The phone feels light despite weighing 160 g, and is slim but it doesn’t feel flimsy. 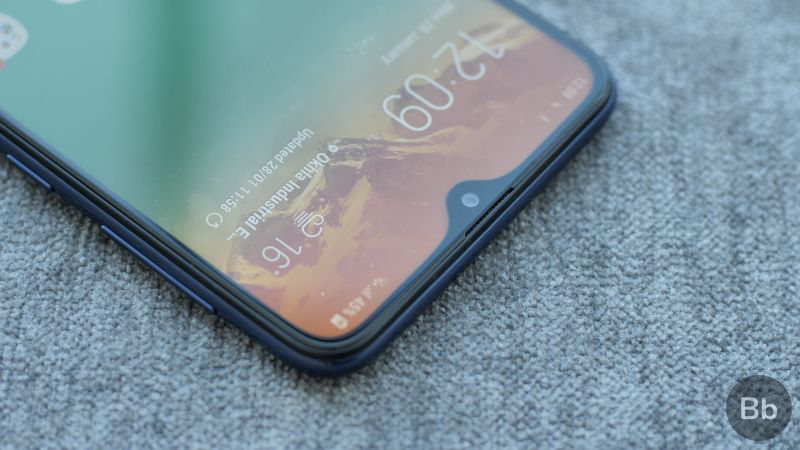 I am not sure anyone will be bowled over by the M10’s design. It’s utilitarian at best and the back just looks too simple, rather than pleasantly minimal. Clearly, Samsung is confident the overall user experience will outweigh the plain design.

The big talking point with this phone will be the presence of the Infinity V notch, which is a first for a Samsung phone, along with the Galaxy M20, which was also launched today. The notch is not intrusive and certainly doesn’t get in the way of the UI. It reminds us of the notch on the OnePlus 6T, which is not a bad thing.

One of the highlights of the M10 has to be the display. The 6.22-inch PLS TFT panel has a HD+ resolution of 720 x 1520 pixels with a 19:9 aspect ratio and around 271 ppi of pixel density. It’s a bright and vibrant panel which is a bit surprising given that it is a TFT panel, and not IPS. It has good viewing angles and the sunlight legibility is quite good too.

The overall color tone of the display is a little cool for my liking, with a noticeable blue tinge in white backgrounds. To be honest, we didn’t expect a flawless panel, but even so the Galaxy M10 has a really good display for the price range. I would say this is one of the top budget phone displays right now.

The front camera is also used for face unlock which works well, and shows this really cool rippling or wave effect around the notch when unlocking the phone.

The phone didn’t seem bogged down by multiple apps open and didn’t seem to have any lag that got in the way of the user experience. We installed the latest version of some leading games, let two Google accounts sync to the phone, while also installing updates for other essential apps from the Play Store. The phone didn’t have any problems keeping all the open apps in memory either, which means Samsung has done a good job in terms of optimization of the memory. 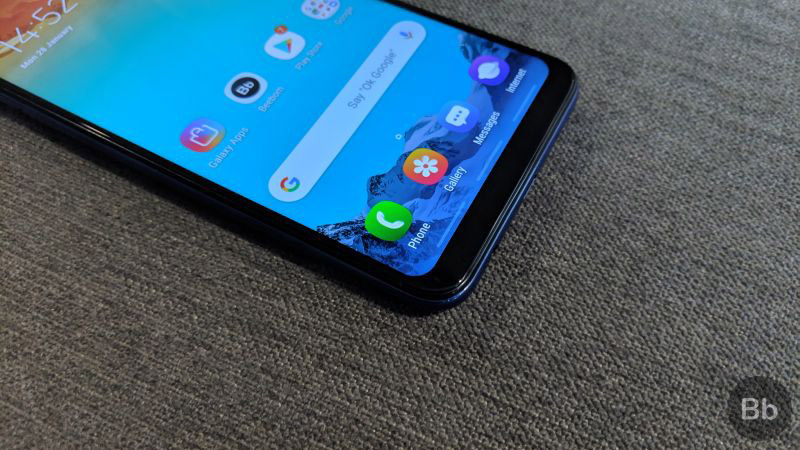 For gaming, we tried out Asphalt 9 and PUBG Mobile. Neither game looked its best self on this phone, likely due to the less-than-top-tier hardware. Asphalt 9 showed some screen tearing when the cars went into hyper drive, while PUBG Mobile was smoothest at low settings. It’s not the best phone to have for someone who wants to keep gaming on the go, but it’s certainly more than good enough for casual gaming as well as shorter sessions.

The combination of the SoC as well as 3GB of RAM provided a decent, stutter-free experience in our first few days with the phone. We will be running extensive benchmark tests to compare the Exynos SoC’s performance in the next few days. Stay tuned for our full review to find out more.

The M10 runs Android 8.1 Oreo, with the Samsung Experience UI bringing its share of bloatware to the out-of-the-box software experience. Samsung has said the Galaxy M10 will only get Android Pie in August. That’s almost when Android Q is expected to be out. This is a major disappointment for potential buyers. And it only reinforces Samsung’s image of being lethargic when it comes to updates for the mid-range and budget segment. 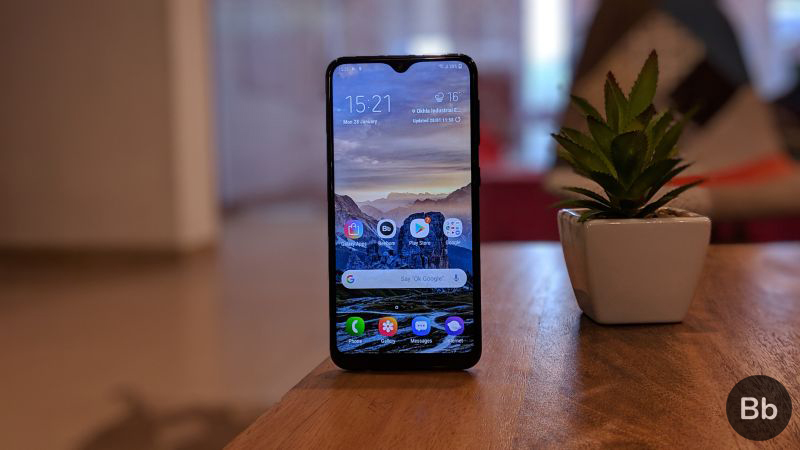 Once you get used to the UI/UX quirks and Settings pages of Samsung Experience, the experience is more or less like any other budget phone with the only difference being the OEM skin. I won’t really pan Samsung Experience for the bloatware since the competition isn’t doing any better. At least, Samsung does not inject ads into your notification banner by default like on MIUI.

Dual cameras are becoming very common in the budget segment, but not like the ones on the Galaxy M10. That’s because Samsung has added an ultra-wide sensor, instead of the typical depth sensor found in the competition. We have seen a similar sensor in action in the Galaxy A7 and A9 and the wide-angle definitely makes certain kinds of photos look more immersive and impactful. 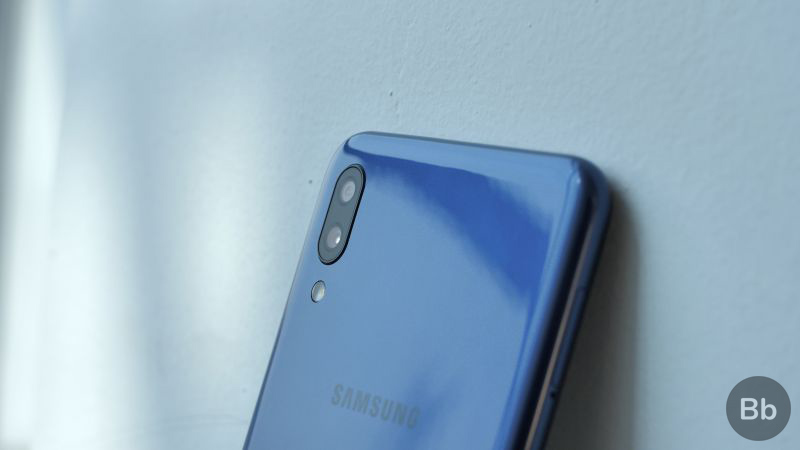 Here are some samples from the rear camera:

And here are a couple of examples of the wide-angle camera in action:

The notch on the front houses the 5MP f/2.0 selfie camera. These selfies are nothing great to speak of, but Samsung has added a Live Focus mode which helps you take shots with blurred background. You can also add stickers to you selfies – because, why not?

We aren’t quite ready to deliver a verdict for The Galaxy M10’s dual rear cameras. We will be comparing the the 13MP f/1.9 main camera and the 5MP f/2.2 ultra-wide camera to the competition, so stay tuned for the full review which should be coming up soon.

Another key focus area for Samsung with the M10 is the battery. Samsung has packed in a 3,400 mAh battery, which falls short of what some of the competition offers – Realme C1, for example, has a 4,230 mAh battery. The Galaxy M10 should ideally provide all-day usage, and the smaller battery pack is likely to reduce the weight of the phone. At 160 g, it’s already on the heavy side so the weight must surely have been a consideration on Samsung’s part. 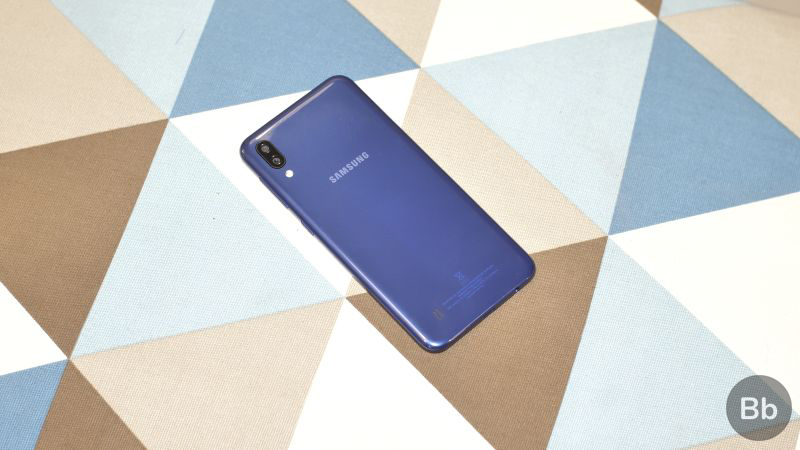 The Galaxy M10 doesn’t have fast charging support and comes with a standard 5v 1A charging adapter in the box. Samsung has not mentioned any support for fast charging standards, unlike the Galaxy M20.

We will be doing our standard battery tests with the Galaxy M10 to see whether that battery is actually a problem.

I won’t lie: I was looking to be impressed by the Galaxy M10 before I went ahead and used the phone. But the first impression is that it’s an underwhelming device. Perhaps it’s down to the plain design of the back – we have become spoilt by the finish and look of some of Honor’s budget phones – or the fact that nothing on the specifications sheet seems to grab our attention from the outset.

It’s really a very run-of-the-mill kind of product. I would contend that while the M10 signals a new approach for Samsung, it might not be enough to take on the competition.

Of course, I could very well eat my words after using the phone extensively and coming at it from a budget user’s point of view. Samsung is hoping to change the budget segment user experience with the Galaxy M10 and over the course of this next week, we will be seeing exactly how it has gone about it and whether it works. Stay tuned for our full review, and do let us know what you think about Samsung’s specs and design decisions for the Galaxy M10.