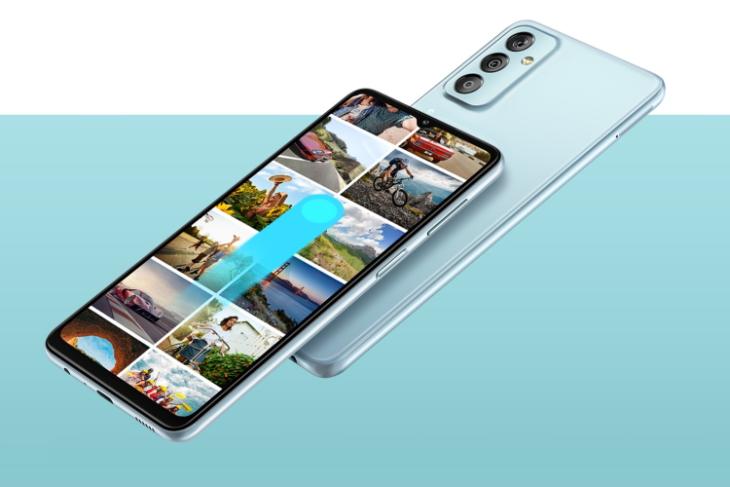 Samsung has unveiled its latest budget 5G smartphone, the Galaxy F23, in India. It is the company’s first-ever Galaxy F-series phone with a Snapdragon chipset, that too a 5G-enabled one. You also get a high refresh rate display, a 50MP camera system, fast-charging support, and more. So let’s check out all the details.

If you haven’t noticed it already, Galaxy F23 is a rebranded version of the recently launched Galaxy M23. Starting with the design, you have a rectangular triple camera module on the rear and a waterdrop notch display on the front. The smartphone has a plastic back panel and a side-mounted fingerprint sensor that doubles as the power button.

The Galaxy F23 comes with a 6.6-inch Full-HD+ display with a 120Hz refresh rate, which is another first for a Galaxy F-series smartphone. The panel here also supports a 20:9 aspect ratio, 1080 x 2408 pixels resolution, and Gorilla Glass 5 protection.

The smartphone is powered by the Snapdragon 750G chipset, coupled with up to 6GB of RAM (expand up to 12GB using the RAM Plus feature) and 128GB of storage (expandable up to 1TB via a microSD card). Qualcomm Snapdragon 750G is an 8nm octa-core chipset, which packs the Qualcomm X52 5G modem and the Adreno 619 GPU. It also powers other mid-range phones like the Nord CE and Xiaomi 10i 5G from last year. The Galaxy F23 supports 12 5G bands in India.

The triple camera module on the Galaxy F23 includes a 50MP primary camera, an 8MP ultra-wide lens with a 123-degree FOV, and a 2MP depth sensor. Also, you have an 8MP selfie camera housed in the waterdrop notch on the front. There’s a 5,000mAh battery unit onboard, and it supports 25W fast charging. But it’s important to mention that the reports from yesterday are true, and Samsung will not include a charger in the Galaxy F23 box. You will only get the smartphone and USB-C charging cable in the box.

Moreover, Galaxy F23 runs One UI 4.1 based on Android 12, which is great in comparison to some other phones that are still launching with Android 11 in 2022.

The smartphone comes in two RAM+storage configurations. The 4GB + 128GB base variant of the Galaxy F23 5G is priced at Rs 17,499 in India, whereas the higher-end 6GB + 128GB variant will retail at Rs 18,499. ICICI Bank customers can get a Rs 1,000 instant cashback on this phone as an introductory offer.

The device will be available in two colorways, namely Forest Green and Aqua Blue. It will go on sale starting from 16th March, exclusively on Samsung Shop and Flipkart in India. What are your thoughts on this new Galaxy F-series phone? Let us know in the comments below.