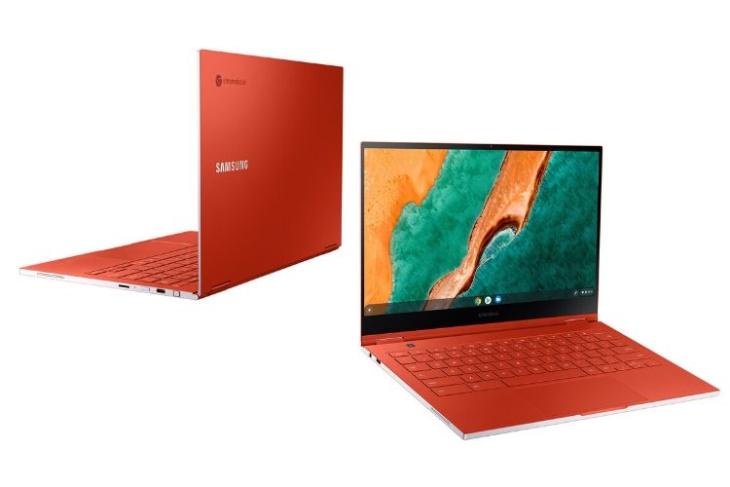 Samsung has already shown off its true bezel-less 8K smart TV, Galaxy S10 Lite, Note 10 Lite, and other amazing gadgets at CES 2020. But, it is not done yet and has today taken the wraps off its first-ever Galaxy Chromebook at the trade show. It’s a 2-in-1 convertible laptop, which looks elegant and comes in a variety of attractive colors. It includes support for the company’s signature S-Pen, along with a weird webcam placement.

Galaxy Chromebook boasts an aluminum build, measures just 9.9mm thick and weighs in at just around 1 kilograms. The Fiesta Red (seen below) and Mercury Gray color variants add to the charm, but it’s the 13.3-inch 4K UHD AMOLED display (3840 x 2160 pixels resolution) that takes the cake.

Samsung is the first company to bake an AMOLED panel into a Chromebook. It boasts a slim 3.9mm bezel and will support the HDR400 standard, which will be enabled over the coming days via an OTA update. Also, the display supports the “Ambient EQ” technology we’ve previously seen on Nest Hub to adjust the color temperature based on the room’s lighting. 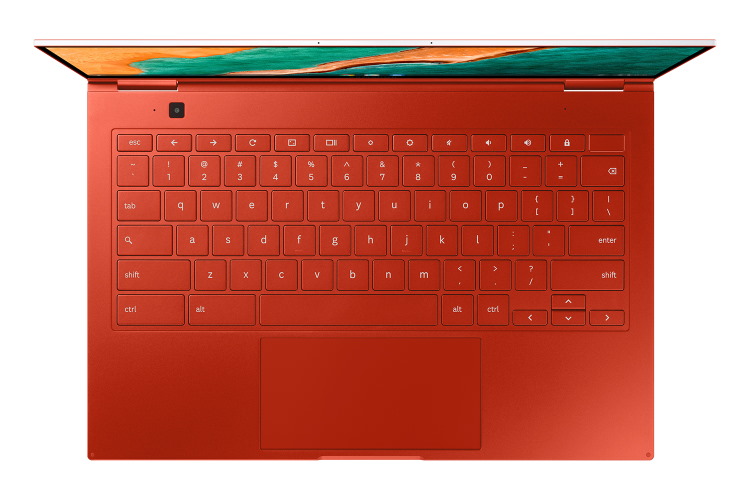 Samsung not only takes care of the Galaxy Chromebook’s look but offers uncompromised power under the hood as well. It’s powered by the 10th-Gen Intel Core-i5 processor, along with up to 16GB of RAM and up to 1TB of SSD storage. The company further boasts of boot times as fast as 6 seconds, Wi-Fi 6 support for a speedy Internet connection, and the built-in S-Pen that you can use to write, draw, and navigate Chrome OS.

Galaxy Chromebook also includes a fingerprint sensor for quick unlocking, which is great, but the camera placement (8MP, rear) right above the keyboard is a little weird. But, the company is calling it a rear camera and it will come in handy in tent mode. There’s a 1MP webcam (possibly with the same potato quality as other webcams) on the front.

The Galaxy Chromebook comes equipped with a 49.2Wh battery pack, which Samsung claims should last you at least 8 hours on a single charge. This is also the first laptop to have been co-engineered with Intel as part of the Project Athena innovation program. It will go on sale sometime in Q1 2020 at an exorbitant starting price of $999.99. There’s currently no word on whether it will arrive in India or not.