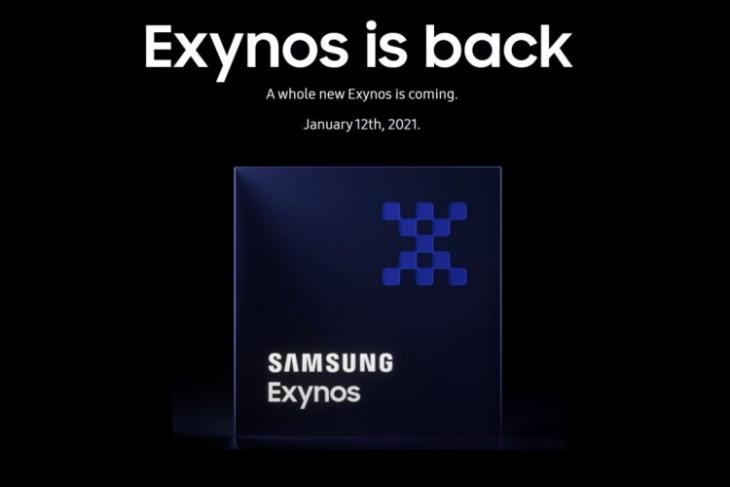 The company took to Twitter to reveal the launch date earlier last night. The chipset arrives on 12th January – two days ahead of the rumored Galaxy S21 event date. The teaser simply says ‘Exynos is back’ and does not reveal anything about the upcoming chipset.

Samsung may not have hinted at the internals, but the folks at WinFuture did recently share the rumored Exynos 2100 specs sheet. Just like the Snapdragon 888 and Apple A14 Bionic, Exynos 2100 will be a 5nm chipset. It will be an octa-core chipset with a single ARM Cortex-X1 core clocked up to 2.9GHz, three ARM Cortex-A78 cores clocked at 2.8GHz, and four ARM Cortex-A55 cores clocked at 2.4GHz. Exynos 2100 will also equip an ARM Mali-G78 GPU, a 5G modem, and possibly a powerful new ISP and AI Engine for faster processing.

While the Snapdragon 888 SoC will most likely power the Galaxy S21 series in the US, Samsung will include the in-house Exynos 2100 chipset in phones shipping to India and Europe. Recent reports suggest that Samsung’s flagship chip will be on par with Snapdragon 888 next year. It will be interesting to see whether users will get their money’s worth in 2021 or the Exynos chipset continues to disappoint.