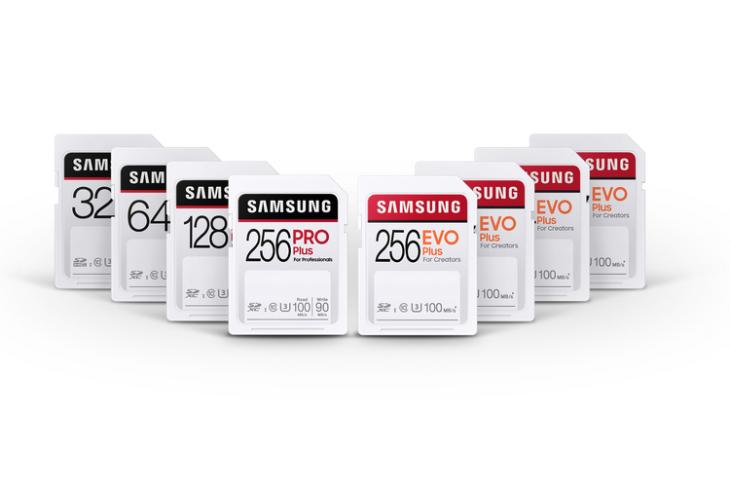 Samsung has unveiled two new lines of SD cards for content creators and photography enthusiasts. Called ‘PRO Plus‘ and ‘EVO Plus‘, the cards are available in capacities ranging from 32GB to 256GB, and are compatible with DSLR, mirrorless, and compact cameras, as well as camcorders and PCs.

The more premium of the two, PRO Plus, offers sequential read and write speeds of up to 100MB/s and 90MB/s, respectively, while the EVO Plus offers transfer speeds of up to 100MB/s. While the company doesn’t say as much, it is likely to be random read speeds, which would make them slower than the PRO Plus lineup.

All of these cards are waterproof, temperature-proof, X-Ray proof, magnet-proof and shockproof, with Samsung promising that the cards will now also be drop-proof and wearout proof, which should make them last longer than standard SD cards. According to the company, the cards can withstand up to five-meter drops as well as up to 10,000 swipes, enabling them to withstand “intensive usage and the most rugged conditions”.

In an official press release announcing the launch, Samsung said that the cards are meant to offer maximum performance and reliability for professional photographers, cinematographers and YouTubers, thanks to their support for 4K UHD video recording and burst shots. The cards also offer smooth playback when editing 4K, as well as Full HD videos, the company said.