Celebrity hacks are increasing by the day, even as companies try to implement more security measures. After Twitter CEO Jack Dorsey’s account got hacked a few days back, it looks like Robert Downey Jr’s Instagram has now been hacked.

While we’re not aware as to who hacked the famous actor’s Instagram account, the hackers made a post on his feed about a giveaway, which is most likely fake. Moreover, the hackers also posted a number of giveaways on Robert Downey Jr’s Instagram Stories, in an attempt to make it look like the actor was giving away iPhones, MacBooks, and even Tesla Model X cars, among other things. They have even added the giveaways to RDJ’s highlights on Instagram. 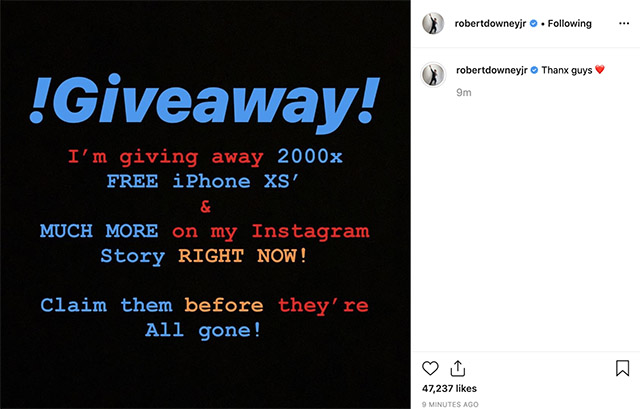 So apparently the hackers changed @RobertDowneyJr recovery email on @instagram so if there is anyone that works there can help him?

In a subsequent tweet, Bosslogic claims that RDJ’s team has gotten a handle on the situation, but it remains to be seen exactly how the hackers managed to gain access to the celebrity’s account in the first place.