Scientists have been working on smart wearables for quite a long time with one of the most interesting use-cases being synthetic skins that can augment… well, the skin.

Now, researchers from the University of Tokyo, led by Professor Takao Someya, have announced that they’ve successfully developed an advanced type of e-Skin that can do a lot of cool stuff.

The e-Skin is loaded with sensors that can read and track vital signs in real time. These readings are then displayed on the e-Skin itself, thanks to an LED matrix that’s built-in. According to the researchers, the e-Skin can track vital signs including heart-rate, blood pressure, or temperature. Plus, it doesn’t need a smartphone app since it displays the information on the skin itself while having the capability to locally store the information — all of which translates to easier and faster access to information and still retaining the capability to track changes over time. 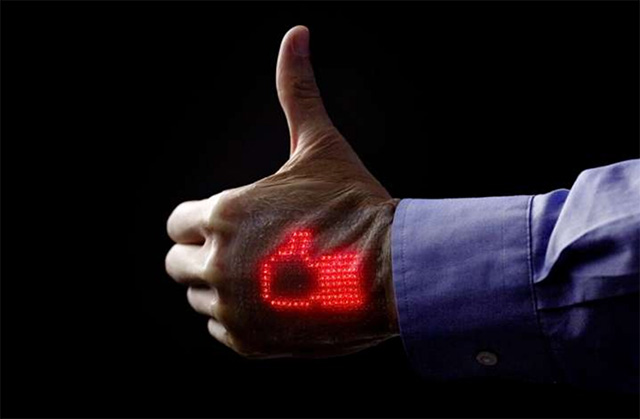 However, if preferable, the e-Skin can be paired to a device in order to send collected information to some secure location such as the cloud.

The team of researchers has worked on a number of e-Skin projects in the past and have even authored a paper describing the construction of an e-Skin of the kind they’ve now successfully made. The e-Skin is made out of nanomesh, and is breathable and stretchable — so it should be reasonably comfortable to wear — and could also lead us to the ‘bodyNET’ proposed by Stanford University researchers last year.

The research team has mentioned that the company responsible for 3D printing the skin says it should have a market-ready product sometime in the next three years. It definitely seems like we’ll all very soon come into a sort of symbiotic relationship with technology, with everything living right on our bodies instead of a metal brick in our hands and backpacks.