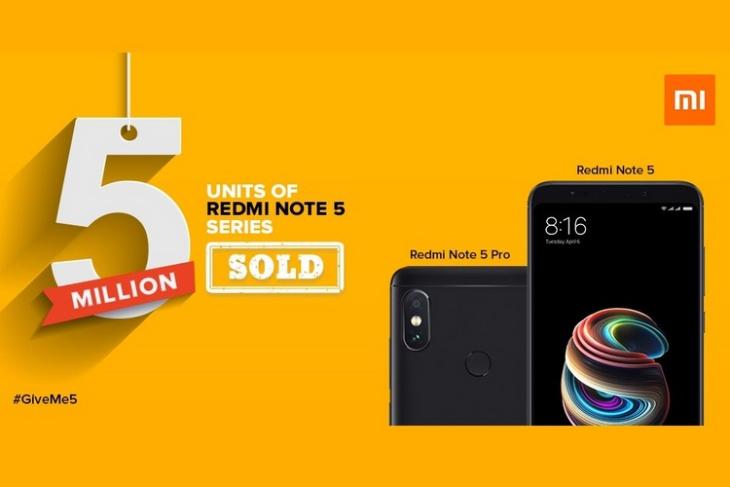 Within just four months of their launch in India, the Redmi Note 5 and Redmi Note 5 Pro have together crossed the 5 million sales mark in India, Xiaomi claimed earlier today. In a tweet, Xiaomi’s India head, Manu Kumar Jain, said that the company believes the two devices represent the fastest a phone has crossed the mark. The Redmi Note 5 duo were launched in India on February 14 at prices starting from Rs 9,999.

We've been working hard to ramp up the supplies of #RedmiNote5Pro & #RedmiNote5 so that Mi Fans can buy them easily. (1/2) pic.twitter.com/vjr4uayyOv

For context, the Redmi Note 4, which was reportedly the best-selling phone in India last year, took six months to reach the 5 million mark in the country, according to Jain. The device apparently went on to sell around 10 million units within one year of launch.

Jain also looked to address the unrelenting complains about the flash sales model, which often leave buyers confused and disappointed. According to him, the company is working hard to ramp up supplies of the two devices so as to make it easier for consumers to buy them.

In terms of cameras, the Note 5 has a single 12MP rear camera sensor, while the Note 5 Pro sports dual rear cameras with a 12MP+5MP setup. Both devices originally shipped with the company’s proprietary MIUI 9 ROM that’s based on Nougat, but has since started receiving the Android Oreo update.