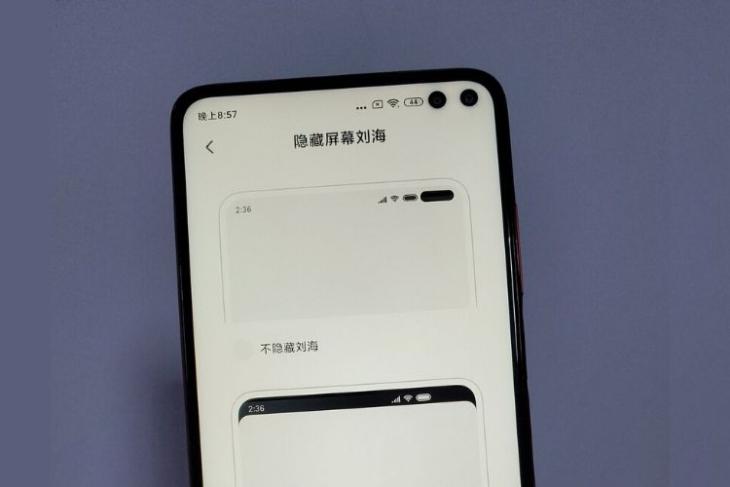 Redmi K30 launched recently in China with the latest Snapdragon 765G 5G chipset and a 120Hz display. It’s an IPS LCD display panel with a ‘dual-camera punch-hole’ design that resembles Samsung Galaxy Note 10. But, a quick hands-on with the smartphone reveals that the punch-hole here isn’t exactly the same as Note 10.

Not this may come as a huge surprise to some but thanks to a Weibo user, we have now learned that Redmi K30 doesn’t have a single pill-shaped cutout for the punch-hole cameras up-front. Instead, as you can see in the GIF below, the company has drilled two separate holes in the bezel-less display up-front. The space between the two holes is masked by a black bar, which can be turned on/off from the settings.

As users went hands-on with the Redmi K30 (both the 5G and 4G models) at the launch earlier this week, they came across the option to adjust the display cutout. You can pick from among 3 options – black bar joining the punch-holes, two separate punch-holes or absolutely no punch-hole. You can have a Pixel 4-style black bezel at the very top but it would ruin the look of your bezel-less Redmi K30.

Now, the biggest caveat of having two separate punch holes in the Redim K30 will surely have to be the new display onboard. The company has opted for a high refresh rate LCD panel as opposed to an AMOLED display. So, you can expect the blacks between the two cutouts to not be as deep as that on an AMOLED panel. It doesn’t appear to stand out or look odd in almost any hands-on video that I’ve seen to date.

We have only seen something like this in patents to date but Redmi has gone ahead and made it. A good reason for having two separate punch-holes could be the costs involved with drilling the holes. Two holes would be cheaper than the pill and I’m not against the design, especially at the price point.

But, now you can’t unsee the two separate punch-holes and they will haunt you. You’re welcome.