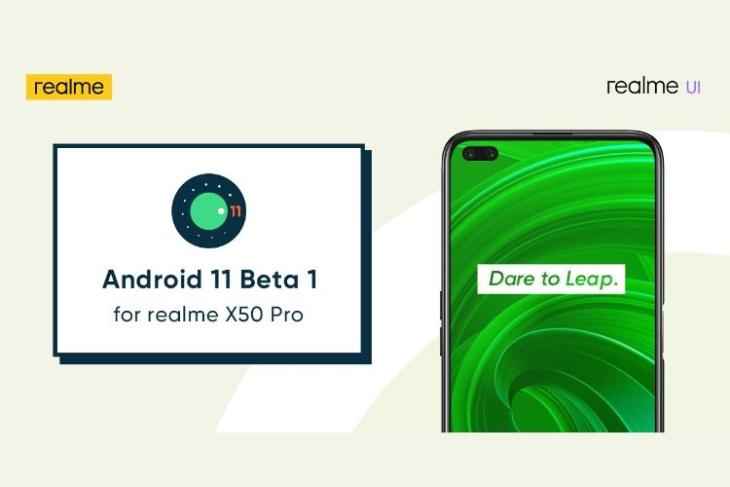 Following closely behind Google, several Android phone makers have started rolling out or announcing which of their devices will be part of the Android 11 beta program. Realme joins the list today with the announcement that its latest flagship smartphone, Realme X50 Pro, will receive the Android 11 beta 1 update in early July.

Realme revealed that you will be able to test Android 1 beta on your Realme X50 Pro via an official tweet earlier this afternoon. The company hasn’t shared an official date expect for an early July release timeline.

Ready to test @Android 11 Beta 1 on your #realmeX50Pro? #realme is bringing to you the chance to be among the first to try out #Android11.
Stay tuned! #LeapToAndroid11 pic.twitter.com/SGZreTmlg1

Realme X50 Pro currently runs Android 10-based Realme UI. With Android 11, you will be able to experience features like Bubbles (floating message notifications), the one-time permission setting, the new power menu, and music controls in the quick settings menu.

Realme also intends to bring the Android 11 beta 1 update to more devices in the near future, as per the official press release. If you remember, Realme 3 Pro was the device that received Android 10 beta updates last year. This is because the company did not have any flagship phones in its portfolio at the time. Let’s wait and see when Realme X50 Pro gets this update.

If you want to find out if your smartphone is eligible to receive the Android 11 beta 1 update, then head to this link right away. Popular OEMs like Xiaomi, OnePlus, and Poco have revealed the devices in their portfolio that will be part of the Android beta program this year.