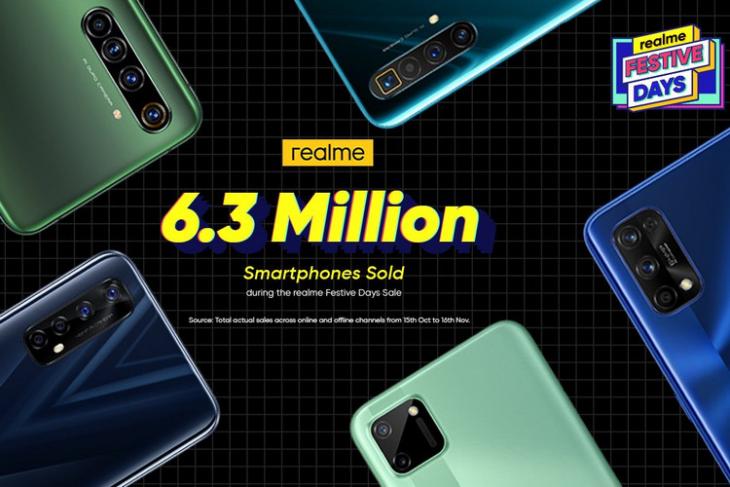 Chinese smartphone brand, Realme, has announced that it sold 6.3 million smartphones in a 45-day period during the festive shopping season in India this year, helping it grow 20% on a YoY basis. Overall, the company says it sold 8.3 million devices during that period, including more than 1,90,000 units of Realme smart TVs, more than 3,50,000 smart wearables and over 1.25 million audio products during the Realme Festive Days sale, which ran from October 16 to October 21.

As World’s Fastest Growing and India’s No.1 Quality Smartphone brand. We sold more than 6.3 Million Smartphone Units during the #realmeFestiveDays increasing by 20%+ YoY basis.
Thank you for the love and support, we will continue to provide best tech-trendsetting products. pic.twitter.com/dcGmxpxfWo

Making a mark in tech-lifestyle & providing the best trendsetting technology, we have sold 190K+ units of the #realmeSmartTV, 350K+ units of Smart wearables & 1.25M+ units of Smart Audio category during the #realmeFestiveDays.
We are now truly an emerging tech brand! pic.twitter.com/EqVRltmpQv

In a prepared statement released on the occasion, Realme CEO, Madhav Sheth, said: “We are overwhelmed to see the adoption of Realme products at such a fast pace. Realme offers the most blockbuster products which are high on features, style, and performance and is available across price segments”.

Realme is reportedly the fourth-largest smartphone brand in India currently with a 15% market share. According to data from market intelligence and analysis firm, Counterpoint Research, Samsung regained its position as the top smartphone vendor in the country in Q3 with a market share of 24%, while Xiaomi slid down to number two with 23% share of the market. Fellow BBK Electronics stable-mate, Vivo, came in at number three with 16% market share.