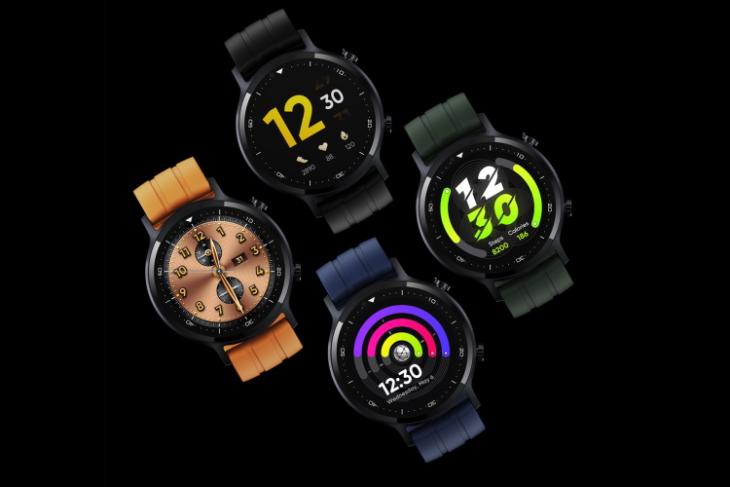 Realme step foot into the smartwatch segment with the launch of its affordable Realme Watch in May earlier this year. It has a square display and all of the major features that one expects from a smartwatch. Well, the company builds on the same with the launch of its first smartwatch with a circular display. It’s dubbed Realme Watch S, as rumored in the past, and has made its debut at Realme’s event in Pakistan today.

Realme Watch S features an aluminum alloy frame with a circular dial and two tactile buttons on the right. It features a 3.3-cm IPS LCD panel as opposed to AMOLED on several other smartwatches. The display boasts 360 x 360-pixel resolution, Gorilla Glass 3 protection, and up to 600 nits of peak brightness. Realme also offers 5-level auto-brightness control and support for 100+ watch faces with this smartwatch.

What software does the Realme Watch S support? Well, if you are expecting it to run Google’s Wear OS, well, then you are not in luck. The watch supports the company’s proprietary OS, which we’ve already seen on the first Realme Watch. It has now been customized for the circular display but the key features, such as message notification, call rejection, camera control, idle alert, and drinking reminders among other things.

Next up, let us talk about the health and fitness features of this smartwatch. Realme Watch S supports real-time heart rate tracking, blood oxygen monitoring (thanks to the SpO2 sensor, which is seeing wider adoption during the COVID-19 pandemic), and meditation (breathing exercise to relieve stress). It even offers sleep monitoring, just like any other fitness band.

How long does the battery last, you ask? Realme Watch S comes equipped with a 390mAh battery pack that should last up to 15 days on a single charge, as per the company’s claims. Realme bundles a magnetic charger with this smartwatch, which is capable of charging it from 0% to 100% in 2 hours. Also, the watch carries an IP68 rating, which means it is water and dust resistant.

Realme Watch S has been priced at 14,999 PKR (~Rs. 6,999) in Pakistan and will be available to buy in a single black color variant. You can choose from among a variety of colorful straps such as orange, green, and blue though.

This is the global debut of the Realme Watch S. You can expect it to launch in India, along with Watch S Pro, very soon – possibly later in November.