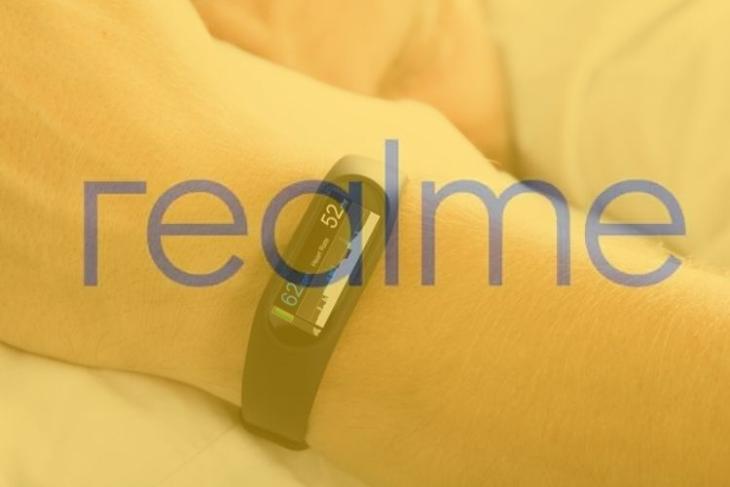 In the Realme 5i launch video, Realme India CEO Madhav Sheth teased the upcoming Realme fitness band towards the end. He only gave us a sneak peek at the yellow-colored strap, keeping the display away from sight. There’s also a standard watch-like clasp instead of something different like we see on the Xiaomi Mi Band. You can check out a couple of screenshots that we captured right here:

We first learned about Realme’s intention to step foot into the fitness segment back in October. The company has talked about the launch of its fitness band quite a few times now, going as far as to say that it’s coming in the first half of 2020. Well, it appears like Realme is eager to show off its much-awaited fitness band and has hinted at its arrival at tomorrow’s Realme 5i launch event in India.

Earlier in the day, Realme India CEO Madhav Sheth revealed that the company has three more surprises – apart from the Realme 5i for tomorrow’s event. He has now hinted that one of these surprises could be the much-anticipated Realme fitness band. In his official tweet, Sheth writes – “If your New Year resolution is to stay fit then I have the biggest surprise for you! The one you guys have been waiting for long.”

If your New Year resolution is to stay fit then I have the biggest surprise for you! The one you guys have been waiting for long.
RT & reply to win this surprise.

Hint: Watch closely during the livestream of #realme5i launch tomorrow at 12:30 PMhttps://t.co/wsRo8HArnO

Sheth further asks us to keep a close watch on tomorrow’s event livestream. This could mean two things. Realme will either unveil the fitness band or tease it on stage as it did with the Realme Buds Air last year. Details on Realme’s fitness band are really scarce (I mean, Xiaomi’s Mi Band competitor hasn’t leaked online) but a new piece of information has today appeared online.

As revealed by tipster @Sudhanshu1414 on Twitter, Realme may also be working on its own smartwatch. The company has received BIS certification for a smartwatch, so eager fans can expect an India debut soon. It could very well be in the works (or be the fitness device that Sheth’s talking about in his tweet) in collaboration with parent Oppo, which recently revealed plans to expand into the fitness, IoT, and smart devices space.

So, does this make you excited for tomorrow’s otherwise lackluster event? Do you think Realme’s first-gen fitness band will have what it takes to trump Xiaomi’s Mi Band? Share your thoughts with us in the comments below.