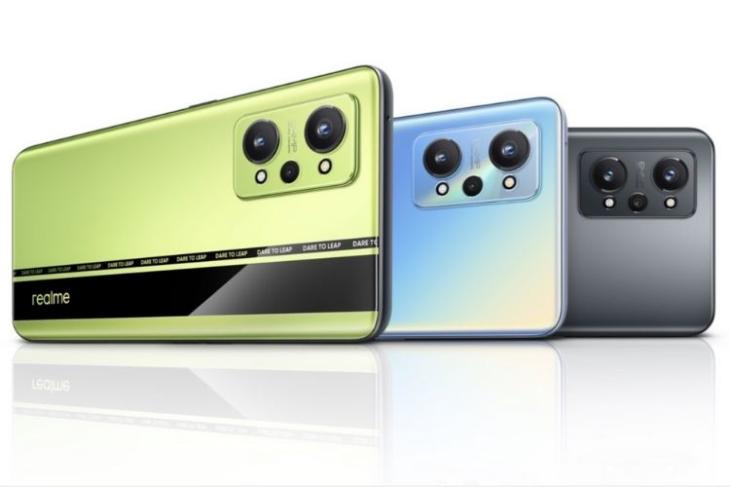 Realme has no intentions of slowing down and is back yet another smartphone launch. The Chinese giant unveiled the Realme GT 5G series in India in august earlier this year and has launched the Realme GT Neo 2 in India today. This device was first unveiled in China around three weeks ago.

This smartphone features the same premium and bold design as other Realme phones. You have a 6.6-inch Full HD+ Samsung E4 AMOLED panel with support for a 120Hz refresh rate and 600Hz touch sampling rate on the front here. The panel boasts a 2400 x 1080p resolution, up to 1300 nits of peak brightness, HDR10+ support, and Gorilla Glass 5 protection.

Under the hood, the Snapdragon 870 5G chipset powers the Realme GT Neo 2 as opposed to the MediaTek 1200 chipset that powered the original GT Neo. The chipset here is coupled with up to 12GB of RAM (expandable up to 19GB via Dynamic virtual RAM extension) and up to 256GB of UFS 3.1 storage, with no microSD card slot for expansion. The device runs Android 11-based Realme UI 2.0 out-of-the-box. but will be upgradeable to Realme UI 3.0 in the coming weeks.

Now, one of the key highlights of the GT Neo 2 has to be the cooling system. As detailed previously, the 8-layer, 3D heat dissipation system onboard is designed to keep the device cool during demanding tasks such as gaming or video editing. Realme says that GT Neo 2’s cooling system utilizes a special diamond thermal gel and has the “largest stainless-steel vapor cooling area in Realme history.”

Turning our attention to the cameras, Realme GT Neo 2 includes a triple camera setup on the rear. It includes a 64MP primary camera, an 8MP ultra-wide lens, and a 2MP macro camera. It supports gyro-EIS and up to 4K @ 60FPS video recording. You will also find a 16MP punch-hole selfie camera on the front here.

Finally, let’s talk about battery life and connectivity. This smartphone includes a 5,000mAh battery (bigger compared to its predecessor’s 4,500mAh battery unit) with 65W fast-charging support. Realme GT Neo 2 also includes stereo speakers, a USB-C port for charging, Wi-Fi 6, and Bluetooth 5.1 to round up the connectivity options. It, however, drops the 3.5mm headphone jack that was present on the original GT Neo.

Realme GT Neo 2 has been priced at Rs. 31,999 for the 8GB+128GB base variant whereas the higher-end 12GB+256GB variant will cost you Rs. 35,999 in India. The device will be available in Neo Green, Neo Blue, and Black color variants. It will go on sale starting from 17th October at 12:00 AM, exclusively on Realme.com, Flipkart, and offline stores.

Besides this powerful smartphone, Realme has also unveiled a handful of gaming accessories, including the Rs. 999 Cooling Back Clip Neo, Rs. 699 Mobile Game Triggers, and Rs. 599 Type-C 65W SuperDart Game Cable at the event today.