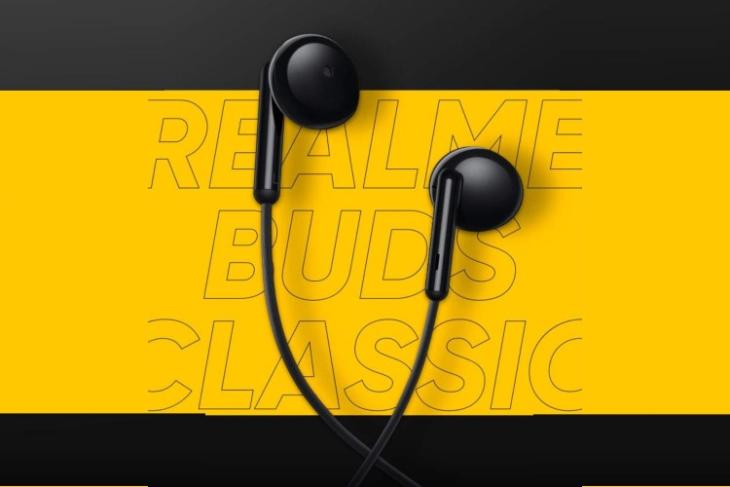 Alongside the launch of Realme C12 and C15 tomorrow, the Chinese giant is now set to expand its audio accessories portfolio with the launch of new wired earphones in India. Called the Realme Buds Classic, these earphones will probably sit under the company’s current offerings in terms of price.

Realme India CEO Madhav Sheth teased that new Realme Buds earphones will arrive in August in the recent #AskMadhav episode. Today, he took to Twitter to reveal that the Realme Buds Classic will launch on 18th August, tomorrow, in India to give users more wired earphone options.

There is still a section of users who prefer to go wired while listening to their content.

We are bringing #realmeBudsClassic for all who love to go the classic way. #RealComfortableRealStylish

As seen in the image above, Realme Buds Classic will boast a half in-ear design in comparison to the in-ear design of the previous-gen Buds. These will be exclusive to Amazon India, with a dedicated microsite shedding light on more of its features.

Realme Buds Classic will feature bigger 14.2mm drivers as compared to the 11.2mm drivers aboard the Buds 2. The company touts that it will offer deeper bass and clear vocals, which will be coupled with a built-in mic and single button to play/ pause the music, attend calls, and more.

These wired earphones will be available in two colorways – black and white. You also have a signature yellow-colored cable organizer but an angled 3.5mm headphone jack is missing in action.

From the looks of it, Realme Buds Classic appears to be an affordable pair of wired earphones. The half in-ear design, along with the single key remote, is a major hint towards the pricing. My best guess would be Rs. 399 for these earphones. What are your opinions on this? Let us know in the comments below.