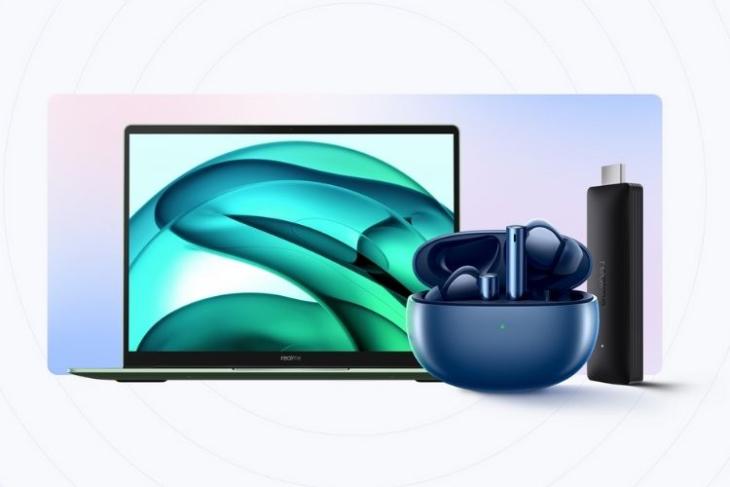 Realme will launch its flagship smartphone – Realme GT 2 Pro in India on April 7. Besides its Snapdragon 8 Gen 1 phone, the company has now revealed that it will introduce the Realme Book Prime, the Buds Air 3, and the recently spotted Full-HD Smart TV Stick too. Here are the details to check out.

All the new Realme products will be introduced via an online event scheduled for April 7 at 12:30 pm in India. It will also be live-streamed via the company’s YouTube channel, and you can get information regarding the event via Realme India’s Twitter handle.

Besides the launch date, Realme has also given us some information on the new products launching soon. To start with, the Realme Book Prime, which was recently announced at MWC 2022, will come with a 2K full-screen display, 11th Gen Intel Core processor, and a thin and lightweight design.

As it has already launched globally, we can expect it to support Wi-Fi 6, a backlit keyboard, up to 12 hours of battery life, a thunderbolt 4 port, stereo sound by DTS, and more. More details, including the price of Realme Book Prime in India, will be announced at the time of launch.

As for the Realme Buds Air 3, it was recently announced in China and also made its entry at MWC 2022. It comes with an in-ear short stem design, ANC support, up to 30 hours of playback time, 88ms Super Low Latency, and more features.

The Realme FHD Smart TV Stick, which recently appeared on Flipkart, will be the second streaming device after last year’s 4K Smart stick. It will come with a quad-core processor, a mini chassis, Full HD support HDR10+, Android TV 11, and more.

Proper details of these upcoming Realme products in India will be available on April 7. To recall, the GT 2 Pro will be the highlight of the show and will be the company’s first flagship of 2022 in the country. It comes with a Snapdragon 8 Gen 1 SoC, various interesting camera features, a few world’s first features, and loads more. Hence, stay tuned to this space for all the information you need.