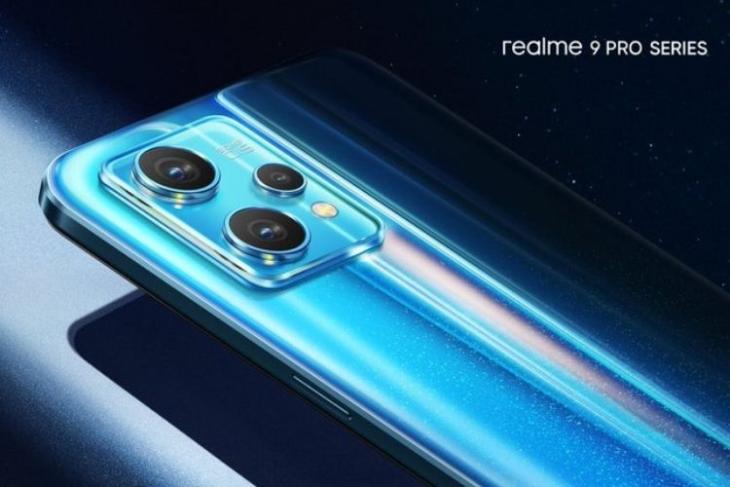 A few teasers later, Realme has announced the launch date of the Realme 9 Pro series in India. The Realme 9 Pro and the 9 Pro+ will launch in India on February 16, for which the company has started sending out media invites.

While not all details are revealed by the company, we do have some information with us. It was recently revealed that the Realme 9 Pro phones will come with a Light Shift design, which will showcase a color-changing effect, much like the recent Vivo V23 Pro. The phones will change from blue to red under different lighting conditions, thus, giving a dual-color look that sounds quite cool! This, however, it will be limited to the Sunrise Blue color only and the other options won’t have the ability.

Besides this, we also know what the phones will look like. The Realme 9 Pro series will boast a rectangular-shaped rear camera hump, which includes two big and one small camera housings. A punch-hole camera cutout is also present is the left-corner, upfront.

Realme also confirmed that the 9 Pro+ will feature a heart rate sensor, which can be monitored via fingerprint scanning, and hence, an in-display fingerprint reader has also been confirmed. We don’t know if the Realme 9 Pro will also have the functionality.

Additionally, the Realme 9 Pro series is expected to focus on the cameras and come with up to a 50MP main camera with a Sony IMX766 sensor with support for OIS+EIS, AI Noise Reduction 3.0, Street Photography 2.0, and more camera features. The 9 Pro+ is confirmed to be powered by the MediaTek Dimensity 920 SoC, while the 9 Pro might get a Snapdragon 695 chipset.

Both phones will support 5G, have high refresh rate displays, and are likely to fall in the budget price bracket. To get more details on the upcoming Realme 9 Pro series, we will have to wait for the February 16 launch event. Hence, stay tuned to know all about them.