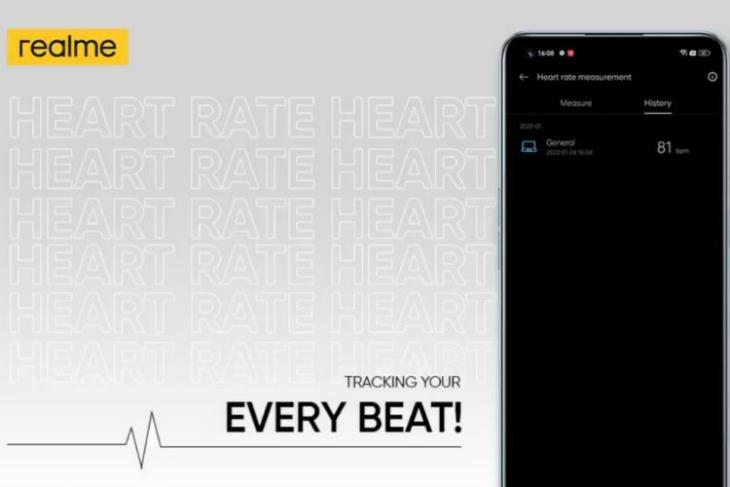 Realme recently confirmed that it will soon launch the Realme 9 Pro and 9 Pro+ as part of the Realme 9 series in India. The company has started teasing the phones, although a launch date is still unknown. In addition to the existing teasers, new information confirms a heart rate sensor will be present on the Realme 9 Pro+.

Realme 9 Pro+ will Come with a Heart Rate Sensor

Realme CEO Madhav Sheth took to Twitter to announce that the Realme 9 Pro+ will have a heart rate sensor for people to track their heartbeat at any time. If you are wondering how this will work, you should know that all you will be required to do is register your fingerprint on the in-display fingerprint scanner (and an in-display fingerprint scanner is now confirmed too!), stay still while it’s being recorded, and it’s done. You will also be able to keep a track of all the measurements recorded previously.

But, you should know that Realme isn’t the first company to incorporate a heart rate sensor in a smartphone. Samsung first introduced the Galaxy S5 way back in 2014 and the latest one to have this functionality is the Lava Pulse feature phone, which was launched in 2020. Plus, you can also measure the same on a Xiaomi phone with ease. Nonetheless, it still appears like an attractive addition, and it would be interesting to see how well and accurately the sensor works.

Apart from this, Realme has revealed that the 9 Pro series will be camera-centric and might focus on low-light photography. The phones are also expected to carry a stylish and lightweight design, although, details aren’t fully known. We expect the company to release more details on this very soon.

Meanwhile, we have some rumors to look at. It is likely that both the Realme 9 Pro and 9 Pro+ will come with either a 90Hz or a 120Hz AMOLED display, support for up to 65W fast charging, and will run Android 12 out-of-the-box. While the 9 Pro could feature 64MP triple rear cameras and be powered by a Snapdragon 695 chipset, the 9 Pro+ could hop onto the 50MP camera bandwagon and come with a MediaTek Dimensity 920 SoC.

Both phones are expected to fall in the budget segment, much like their predecessors, and will compete with the likes of Xiaomi’s Redmi Note 11T, the upcoming Note 11S, and the Note 11. While the Realme 9 Pro is expected to start at Rs 16,999, the Pro+ model might start at Rs 20,999. They will join the Realme 9i, which was recently launched in India.

Since there is no word on the Realme 9 Pro series’ availability details, it’s best to wait and we will keep you posted.