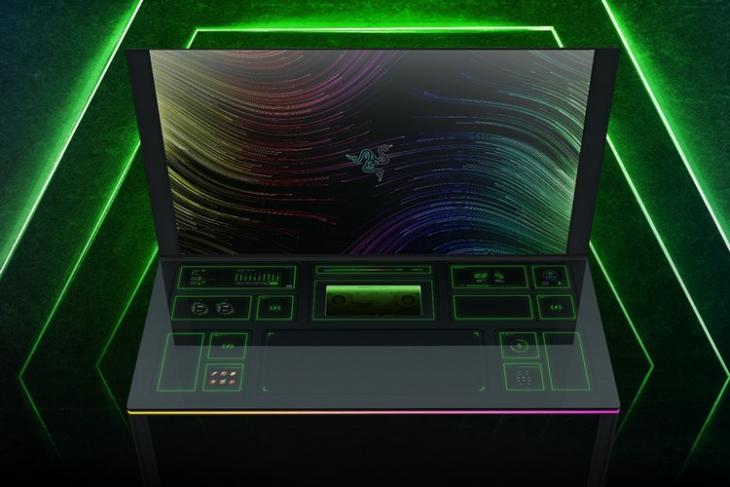 Razer has taken the wraps off some unique and innovative technology at this year’s CES. The gaming peripherals giant recently unveiled a limited-edition smartwatch in partnership with Fossil. Now, Razer has unveiled its most ambitious project yet, in the form of the world’s first customizable gaming desk PC. Check out the details below.

Dubbed Project Sophia, Razer recently unveiled its concept of a fully-modular gaming desk for future gamers to create a customizable desk setup. The main objective here is to offer users a modular desk that is capable of supporting up to 13 separate modules that can be magnetically attached to the desk. And as this is Razer we are talking about, the modular desk will come with a strip of Razer Chroma-supported RGB LED wrapped all around the edges.

These replaceable modules include a THX Surround Sound control panel, a system monitoring unit, a programmable hotkey module, a network performance module, a 15W wireless charger module, a media controls module, a Thunderbolt 4 hub, and many more. There is also a dedicated slot to fit a 65-inch or 77-inch OLED display on the desk.

Hence, users can take one of the above modules and attach it magnetically to the Project Sophia gaming desk to create a personalized desk setup. It is like a physical control hub that lets users monitor and control various functions on the fly.

Now, coming to what is powering the Project Sophia desk PC, Razer has fitted a customized PCB with core components from Intel and Nvidia. The desk comes packed with an Intel processor and an Nvidia GPU to support the individual modules and deliver high-end performance. The company housed the internal components in a slim chassis underneath the glass tabletop that can be easily upgraded.

Razer also aims to bundle an upgraded version of its existing Enki Pro gaming chair with the modular desk. The new Enki Pro comes with the company’s HyperSense haptic system that can deliver relevant haptic feedback based on different gameplay scenarios. The company worked with D-Box to develop the haptic system for the gaming chair and has added native support for over 2,200 games.

The HyperSense haptic system features 65,000 variations, tactile feedback of +/-1 G-Force, and is capable of tilting 1.5-inches backward to deliver a realistic gaming experience. The company says that the Enki Pro’s HyperSense system comes with a response rate of 5ms.

Coming to the price and availability of the Project Sophia setup, it remains unclear whether Razer will release the modular desk just yet. However, we might see the Razer Enki Pro with the HyperSense system make its way to the commercial market sometime in the coming months, though there is no information about its price as of now.

You can check out the official promo video of Razer’s Project Sophia attached below to know more about the futuristic setup.