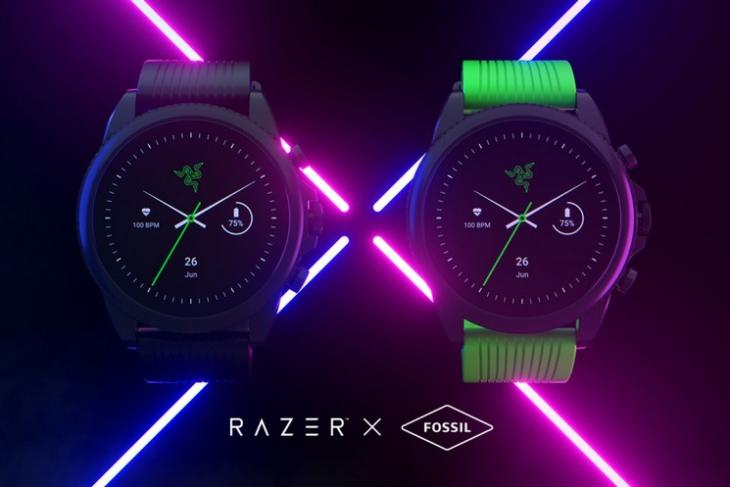 At this year’s CES tradeshow, Razer has gone for a surprise launch. It has collaborated with Fossil to launch a limited edition variant of the Fossil Gen 6 smartwatch, which has been “designed for gamers,” as per the two companies. The Razer X Fossil Gen 6 Smartwatch only has 1,337 units worldwide. Here’s what all gaming elements it entails.

For starters, the Razer x Fossil Gen 6 comes with an additional watch strap in Razer’s signature neon green color, along with the standard black one. Then, there are three unique Razer-branded watch faces – Analog, Text, and Chroma. These can be downloaded on other Gen 6 smartwatch models as well.

While the former two are self-explanatory and feature the Razer logo and its signature font, the Chroma watch face lets users sync the RGB lighting effect of the watch face with Razer’s other Chroma-supported products like keyboards, mice, and headphones. However, it is worth mentioning that there is no RGB lighting on the body of the smartwatch. You will see an RGB halo ring on the edges of the watchface.

Coming to the key specs and features of the Razer x Fossil Gen 6, it sports a 1.28-inch circular AMOLED display with touch support and is powered by Qualcomm’s Snapdragon 4100+ platform, delivering fast app-load times and lower power consumption. However, this one also doesn’t get the perks of WearOS 3.0, which is currently exclusive to the Samsung Galaxy Watch 4 series. The Razer x Fossil Gen 6 runs the previous-gen Wear OS 2.0 and will not get the Wear OS 3.0 update until mid-2022.

Other than this, the smartwatch comes with standard health-tracking features like continuous heart-rate tracking, sleep monitoring, and blood oxygen level (SpO2) monitoring features. There is support for Bluetooth 5.0 for a lag-free wireless connection, and it comes with a fast-charging feature that charges the wearable to 80% in just 30 minutes.

The Razer x Fossil Gen 6 smartwatch retails at $329 (~Rs 24,500), which is $30 (~Rs 2,230) more than the price of the standard Fossil Gen 6 model. To reiterate, the Razer edition of the Fossil Gen 6 is a limited edition watch. If you are interested in this gadget, you can head to Razer’s official website to make the purchase, starting January 10.