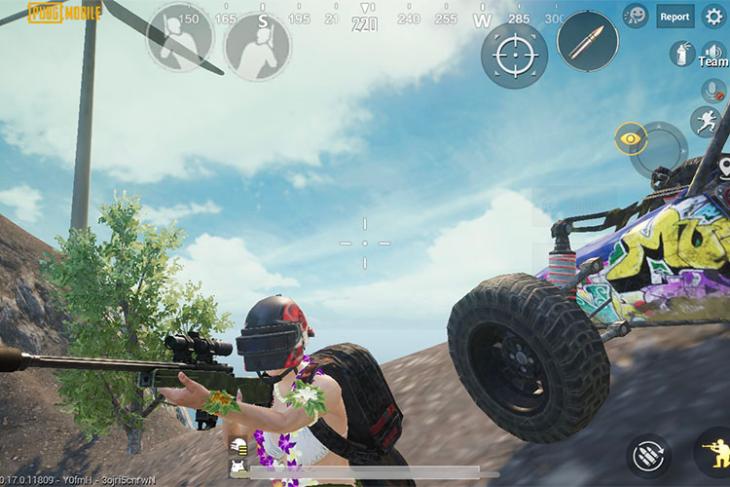 PUBG Mobile is a lot of fun, and the reason is partly the excellent selection of arsenal the game offers. You get pistols and revolvers, shotguns, SMGs, ARs, drones in Arctic Mode, heck even RPGs in Payload mode. However, the sniper rifle is one of the elite weapons in the game.

Sniping, done properly, can get you some insane kills from far away without your enemy even knowing what hit them or from where. So, if you are new to PUBG Mobile, or simply new to sniping in the game, here are 10 tips and tricks you should know about to hit the ground running.

Note: These PUBG Mobile sniping tips are aimed at new players who are not accustomed to sniping in PUBG. If you consider yourself an average, or above average player, these tips aren’t aimed at you. Although feel free to read them if you like.

Before you can start sniping, you actually need to get a sniper rifle. While you can find snipers lying around the map, you have a higher chance of finding one in military areas, such as the Military Base in Erangel. In Sanhok, try landing in Bootcamp.

Air drops almost always contain a sniper rifle. If you’re very lucky, you can find the AWM here which is the most powerful sniper rifle in the game. A headshot with the AWM can’t be stopped even by a Level 3 helmet, so make sure your aim is true.

You will also find the Mk14 inside Air Drops and this is another really great sniper rifle. It can switch between single fire (for long distance shooting) and automatic fire (for close combat) which makes it extremely versatile. Switch between an 8x and a 3x scope for absolute combat efficiency with the Mk14.

With snipers, aiming is extremely important. Most snipers will do ridiculous amounts of damage with a headshot, which means if you can get a headshot on your enemy, it’s likely that they will be killed or knocked out. However, that applies to you too, which means you need to ensure you’re a smaller target to hit for your enemy.

To increase your chances of taking better shots without getting shot back, crouch down when you’re scoped in. This makes it difficult for the enemy to spot you, while still allowing you plenty of options for movement if you need that.

Sometimes you will find the ghillie suit inside air drops as well. If you get this, you can pull off some insane stealth kills.

Find a patch of grass and lie down to become extremely hard to spot. Moreover, you get even better stability this way. Keep in mind though, that being prone means your movement speed is extremely slow, so if you are spotted, you will have to get up and run really quickly.

I have also found that ghillie suits are great for hiding inside bushes and sniping from a crouched position.

5. Deck Up Your Sniper with Attachments

Attachments can take your sniping skills to the next level. The most obvious attachment is a scope, yes, but there are other attachments that can give you the upper hand when you’re locked in a sniping battle. Here’s what I prefer using:

Slap on an extended mag if you can find one. Sniper rifles take long to reload, and extended mags allow you to reload less. This can be the difference between winning a battle of the wits against another sniper and being rushed by enemies while you reload your weapon.

Go for a flash hider or a suppressor. Personally I like using a flash hider when I’m trying to hide with a ghillie suit since this means enemies can’t see my sniper’s muzzle flash to spot me from a distance.

This won’t matter over relatively shorter distances, but as you start taking longer shots with your sniper rifle, you will have to adjust for bullet drop. This is hard, and it takes practice.

Different rifles have different bullet drops. For example, the Kar98k and the M24 are both snipers that use 7.62mm ammo, but the bullet drop in the Kar 98k is much higher than the M24.

If you want to get really good with snipers, choose your favourite snipers and get practicing. The built-in practice room is great for this.

Like I said, snipers are meant for long-distance shooting. That means, a more powerful scope is obviously better to get in those awesome headshots from hundreds of metres away.

However, spotting is just as important as sniping. I would recommend using an 8x on your sniper, and keeping a 3x or a 4x scope on your second gun (probably an AR, right?) to spot enemies.

The 3x and 4x have much wider fields of view than the 8x does, which means you can scan a larger area. Once you spot an enemy, switch to the 8x, scope in, and fire.

One of the best feelings in your journey as a sniper is when you get a headshot on a moving target with a sniper rifle. It’s awesome, and it makes for some excited exclamations from your squad members as well.

Hitting a running target with a sniper is a two-pronged issue. One, bullet drop. You have to aim above the target’s head depending on how far they are from you. Two, it takes time for bullets to travel, and if you keep your crosshairs on the enemy and shoot, they will have moved by the time the bullet reaches them.

To hit a moving enemy, you need a perfect combination of aiming above, and ahead the enemy and shooting. This is yet another thing only practice can teach you to do well. I still haven’t mastered it, but I can do it quite frequently.

A really useful movement option in PUBG Mobile — Peeking — isn’t enabled by default. While this is useful for all sorts of things, sniping is one place where peeking really helps.

Enable the Peek functionality by going to settings and enabling ‘Peek and Fire’ in the Basic settings.

This helps when you’re taking cover behind trees or rocks since you can peek to aim at your enemy without exposing your entire body as a target.

Sniping is about precision. With an M416 or the Groza, at a shorter distance, you can rely to a certain extent on the sheer overpowering shower of bullets from these ARs to kill your enemy, but with snipers, you need to be precise.

Needless to say, if you lose sight of your enemy behind foliage, it’s an issue because you can’t shoot what you can’t see. That’s why, as a sniper, you should always try to position yourself to have the high ground.

Defensively, this gives you a good view of the battlefield, and on the other hand, it allows you take out threats from far away.

Use These PUBG Sniping Tips in Your Next Game

Obviously, you won’t be able to remember all these tips all at once, but you should try out a few of the things I have mentioned here and see how you perform at sniping in PUBG Mobile. The best place to practice is either the practice room, and the Sniper Training mode to practice against actual enemies.

At the end of the day, using sniper rifles properly takes a lot of practice, so even if you don’t get many kills in the beginning, stick with your preferred sniper, and keep playing normally. You’ll get the hang of it in no time.