Last month, PUBG Mobile got a brand new game mode designed to challenge you in more ways than just staying safe from other players. The Arctic Mode (or Cold Front Survival Mode) in PUBG Mobile brings in the wrath of the cold blizzards of Vikendi into the gameplay, so you have to manage resources a lot better with your squad. If you’re facing issues winning in this mode, here are some tips and tricks that can make it easier to get through Vikendi in the new survival mode.

Stock Up on Survival Necessities

In a normal game of PUBG Mobile, you can just gather your favourite guns, a lot of ammo, and medical supplies and get through the game. However, in Arctic Mode, you also have to beat the harsh winter blizzards.

Make sure you gather enough branches. These spawn in the same way as regular loot does, but in a much higher quantity, so pick it up when you see it.

Also, at least one player in your squad should carry a couple of heaters. These don’t last very long, but they create a ring of warmth where all your squad members will be safe from the blizzard, even in the open.

Warm packs are awesome if you like getting more kills (more on that in the next point), so stock up on these as well.

Rush Enemies When They are Trying to Stay Alive

Doesn’t sound like decent human advice, but in PUBG, this is totally fair. Look, when the blizzard arrives, you (and every other squad) will light up fires inside buildings to stay warm. The thing is, these fires are visible on the mini map.

Find out nearby locations where enemies have fires burning, apply a bunch of warm packs, and run out in the blizzard to attack your enemies while they are gathered around the fire.

Beware though, your warm packs only keep your safe for a limited time. You can see the remaining time on the right side of the health-bar in your HUD. 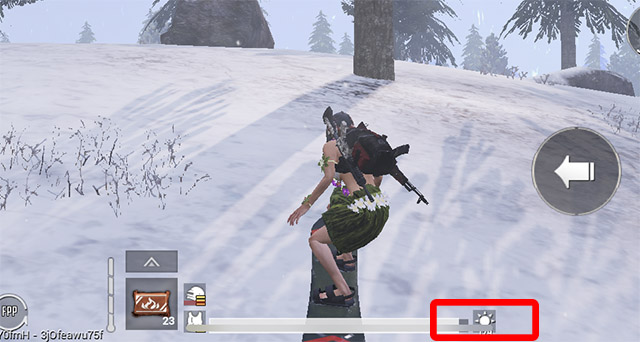 Also, keep an eye out for possible ambushes by other squads who are trying to lure you in, just to kill you.

Use Drones for Scanning the Area, and Sometimes Just for the Heck of It

Look drones are fun, they are awesome, and they are now in PUBG Mobile. You can find drones inside houses, and these are best used when you are inside during a blizzard. You can fly the drone to scout locations, and even mark points of interest on the map.

Drones will also warn you if they hear a vehicle or gunfire sounds nearby.

Also, this last bit isn’t really advice, but my squad and I have a lot of fun flying drones around and annoying people who are sitting inside houses trying to stay warm. It’s just fun. Also, you can get some pretty screenshots with the bird’s eye view; just saying.

Keep a Track of the Blizzard

Normally, I push into the zone towards the very end of the zone movement time, but in Cold Front Survival that can get you stuck in awful situations. It’s always better to first get inside the zone, and then hunt your enemies using warm packs and heaters.

Ski Around The Map

Fun little addition in Cold Front Survival — the Ski. The Ski is a great way to get around the map faster than running. It also doesn’t make as much noise a vehicle does, so it’s good for sneaking up on people.

You will see the ‘Ski’ option appear on screen when you’re on snow. Just tap on it and start skiing. Try doing this when you’re going downhill because that’s where the Ski really shines.

Pro-tip: There’s a bug in the game that sometimes doesn’t let you exit the ski. If this happens, ski to a nearby road, and keep skiing on the road. The ski will automatically disengage in a few seconds.

Get that Chicken Dinner, and Some Insane Kills

Honestly, Cold Front Survival is one of the most fun modes added to PUBG Mobile. I like it even more than I liked Payload back when it first came out. Cold Front Survival allows for a lot of play-types. You can go defensive and stay alive without fighting much, or you can go aggressive and hunt enemies in the blizzard when they are least expecting it. Just make sure to not die in the blizzard. Believe me, that feels worse than dying due to the playzone.