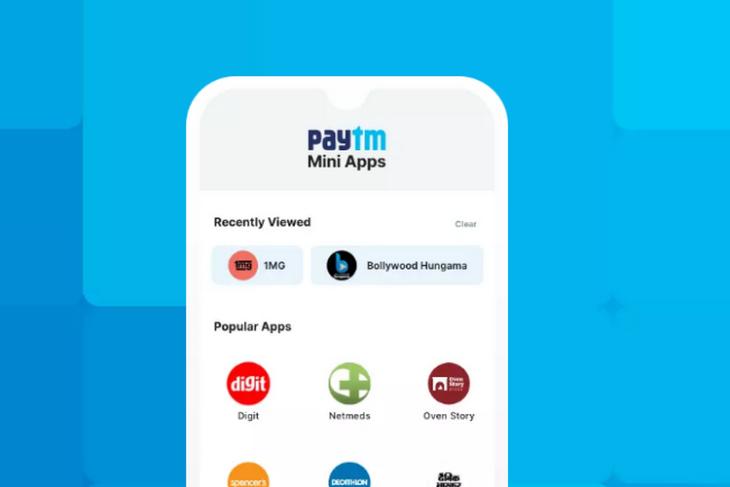 Popular Indian payments platform Paytm has launched its own mini app store within its primary app. The store, dubbed as Paytm Mini apps, features web applications of popular services powered by HTML and JavaScript. The development comes only a couple weeks after the Paytm app was briefly removed from the Play Store.

“Paytm Mini Apps are essentially web applications opened in Paytm App whose functionality is enhanced via inbuilt JS APIs, effectively meaning your app despite being developed as a web app (and not a native app) can still enjoy all the benefits of a native app when being listed as a Mini Apps inside Paytm App,” explains the company.

You can view the newly-launched mini-apps right on the app’s home page. According to Paytm, over 300 services have joined its app store so far. Popular ones include Ola Cabs, Rapido, Domino’s Pizza, Spencer’s, Decathlon, 1mg, and Netmeds.

One notable aspect of this app store is that the company claims it will not charge a commission for via Paytm Wallet, Paytm Payments Bank, UPI, and debit card transactions through Rupay Card. However, there is a 2 percent tax along with 18 percent GST on other payment modes like credit cards, debit cards, and net banking.

“I am proud that we are today launching something that creates an opportunity for every Indian app developer. Paytm Mini App Store empowers our young Indian developers to leverage our reach and payments to build new innovative services,” said Paytm CEO and founder Vijay Shekhar Sharma, in a statement.

Paytm has launched its mini apps store at a time when Indian startups are looking for an alternative to Google Play Store due to Play Store’s 30% cut. While Google initially planned to enforce its billing system by September 30, 2021, the company has now extended the time to let developers in India integrate the billing system by 31st March 2022.

Paytm launching a mini app store within its own primary app gets it one step closer to the dream of becoming the WeChat of India. The company’s app may revolve around payments but it’s widely used across the country. It even had a messaging feature back in the day and it’s possible that Paytm will soon resurrect it to compete directly against WeChat, which is now banned in India.