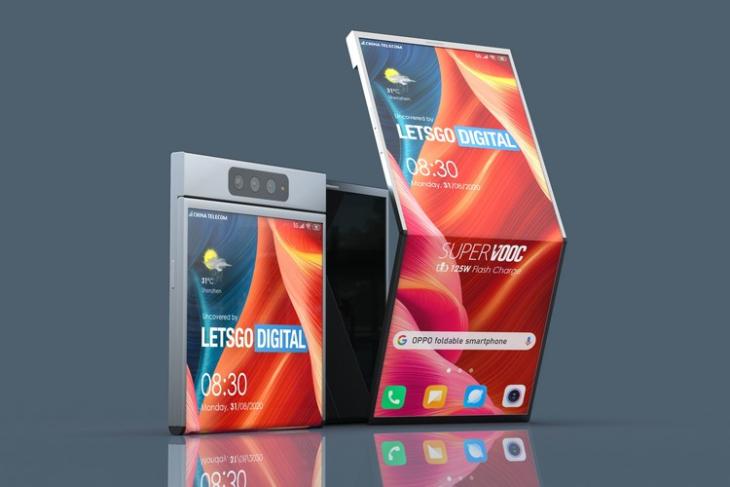 With companies like Samsung and Motorola moving ahead in the foldable smartphone market, several other companies are trying their hands in developing the best of them. Similarly, a recent report suggests that the China-based smartphone-makers, Oppo might bring a Moto-Razr like foldable with a clamshell design.

The patent, spotted by the Dutch media LetsGoDigital, hints at an Oppo foldable that comes in a clamshell design with the foldable screen on the outside of the device. This means that the screen, instead of folding inwards, folds outwards leaving the user with screens on both sides of the device (picture below).

Now, Oppo came up with a concept of a foldable smartphone back in MWC 2019. However, just like Xiaomi’s Mi Mix Alpha, Oppo’s foldable did not see the light of the day.

So now, the company is aiming to develop a foldable that solves the issue of having a tiny screen on the outer part of the foldable devices. Hence, as we saw in the image above, Oppo made a device with a foldable display that folds outwards, much like Huawei’s Mate X.

Coming to the design of the smartphone, when folded, it becomes a really compact device with screens both at the front and back.

This eradicates the issue of integrating a separate tiny screen as a “cover screen” for the folded form. In this form, the main camera module becomes the front camera, as there is a screen at the back. When unfolded, the device becomes a thin smartphone with a long screen.

There is also an “angle detection” tech that helps the device to adjust the UI according to the angle of the fold. This works with the help of magnets and “Hall sensor”.

According to the report, the patent was filed by Oppo in January 2020. So, it is still in its infancy. As a result, the company will have to work on the project for some time before bringing out a functioning foldable device, as the patent suggests.