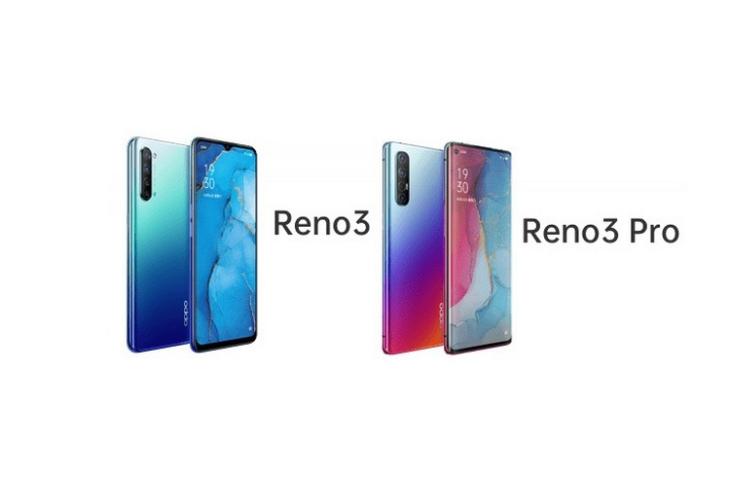 Oppo already gave us an official look at the Reno 3 and Reno 3 Pro (also seen in several online listings) but live images of the higher-end Reno 3 Pro 5G have now leaked online. You can see in the images below that Oppo Reno 3 Pro 5G will sport a dual-curved display with a punch-hole camera on the front. It would also boast a 90Hz refresh rate, according to the leaks.

If we turn our attention to the rear, we get a closer look at the vertical camera array. It’s going to pack quad-cameras with a 48MP primary sensor, coupled with an 8MP ultra-wide lens, a 13MP telephoto lens, and a 2MP depth sensor or macro lens. This leaks also gives us a closer look at two of the 4 rumored Reno 3 Pro 5G color variants – Blue Starry Night and Misty White. There will also be Sunrise Impression and Moon Night Black variants at launch on December 26 next week.

Just four months after the launch of the Oppo Reno 2 in India, the Chinese smartphone vendor is all set to launch its successor with upgraded hardware, enhanced connectivity and improved design. The company had earlier announced a few of the key features of the upcoming smartphone, and now it has posted a new teaser showing off some of the design elements of the Reno 3 and the Reno 3 Pro, both of which are expected to be unveiled simultaneously.

As can be seen from the images, both devices will come with quad-cameras setups and a glass back with a gradient technicolor finish. However, there are a few notable differences, including the design of the selfie-cam housing. While the Reno 3 Pro has a punch-hole on the upper-left side of the display, the standard Reno 3 model comes with a teardrop notch and a slightly thicker chin at the bottom. The Pro model also comes with ultra-thin bezels and a display that’s curved on the sides.

As mentioned earlier, Oppo has already revealed some of the key tech-specs of the upcoming smartphones, including the fact that they will both come with dual-mode 5G connectivity. At least the ‘Pro’ model will also sport a 4,025mAh battery and have a thickness of just 7.7mm, which the company claims will make it “the thinnest dual-mode 5G phone in it’s price segment”.

While the company is yet to reveal further details about the two devices, rumors suggest that the Reno 3 might be powered by the Snapdragon 765 Mobile Platform, while the Pro variant will come with the Snapdragon 865 under the hood, making it the first dual-mode 5G smartphone in the company’s portfolio, and one of the first ones to feature the new chipset.