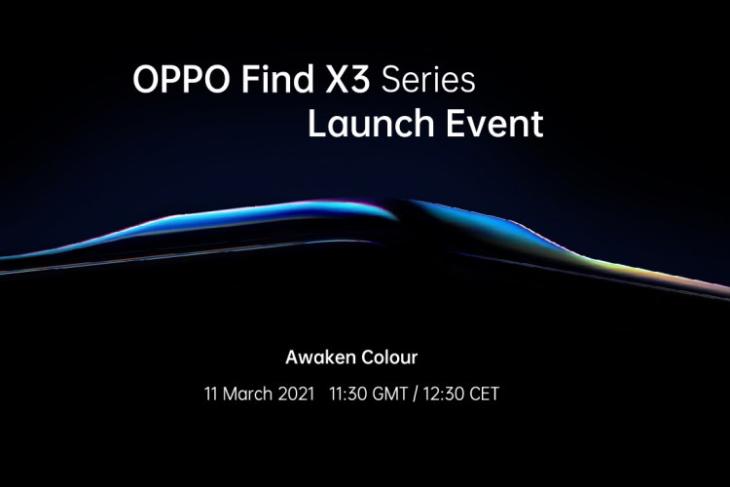 Piggybacking on the success of the Find X2 series in the global market, Oppo is now set to launch its next flagship devices under the series. The Chinese giant announced that it will unveil the Oppo Find X3 series at its “Awaken Colour” virtual event on March 11, 2021. And, as we saw in earlier reports, the Oppo Find X3 Pro is going to be a very special smartphone for the company as it will put a first-of-its-kind feature on the table.

For the uninitiated, Oppo showcased its revolutionary Full-path Color Management system at the Oppo Inno Day 2020. It is a complex color management system that the company designed from scratch to bring 10-bit color support to smartphones. The company was working on the tech in the past and now it is ready to ship with the Oppo Find X3 Pro.

There will be two other smartphones, namely the Find X3 Neo and Find X3 Lite, in the upcoming series, as per leaks. However, the company is expected to launch only the Find X3 and the X3 Pro on March 11.

The highest-end flagship device in the series, the Find X3 Pro, is being termed as the “world’s first end-to-end one billion color phone.” It will be the first Android device to support full DCI-P3 color gamut in all the areas, from capturing images to viewing content on the display. It will most likely come with a 6.78-inch AMOLED panel with a resolution of 1440 x 3216-pixels and a punch-hole design.

The company says that the results of the new Full-path Color Management system are “true-to-life, evocative, rich visual experiences, from capture, to encoding, storage, decoding, and display.”

So, we can expect to see some breath-taking colors and visual experiences while using the Find X3 Pro. It will also feature an adaptive refresh-rate system that will adjust the refresh rate of the screen and keep it between 10Hz to 120Hz, depending on the content.

The company has also improved the camera capabilities of the device. In its official press release, Oppo says that the cameras have been “tuned to empower photography and video capture at the highest quality across a range of scenarios.”

There are no specifics about the sensors and the camera setup, as of now. However, it will allegedly feature a quad-camera setup at the back. This will include a 50MP primary sensor, a 50MP ultra-wide lens, a 13MP telephoto lens with 2x optical zoom, and a 3MP macro lens with support for up to 25x zoom. You can also see the new weird-looking camera design in the leaked renders above.

As for the internal specs, the Oppo Find X3 Pro will be powered by Qualcomm’s flagship Snapdragon 888 chipset with support for 5G connectivity. On the other hand, the Find X3 will reportedly feature the lower-end Snapdragon 870 SoC.

Now, the Chinese giant has already opened pre-registration for the Oppo Find X3 devices on its Chinese website. However, the company will launch the devices on March 11 at 7:30 PM China time (5 PM IST/ 11:30 AM GMT).

There is no information about the prices yet. We will, however, get to know about the pricing in the coming days. If you do not want to miss out on the launch of the Find X3 series, then set a reminder for the live stream on YouTube.