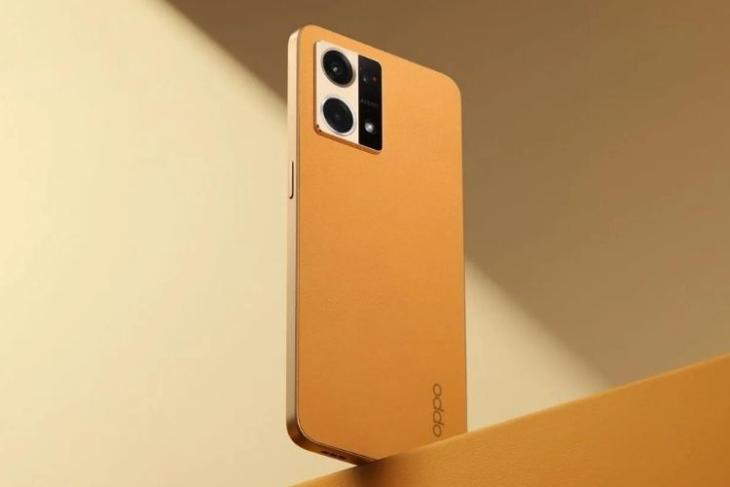 After an official confirmation days ago, Oppo has launched the new F21 Pro series as part of its F series in India today. The series consists of the Oppo F21 Pro and the F21 Pro 5G, both coming with an attractive design, various camera features, and loads more. Here’s a look at all the details.

The Oppo F21 Pro comes with the industry’s first Fiber-glass leather design for a durable and lightweight. It is water and wear-resistant and also acts like a frameless cover for the battery. This finish is available with the Sunset Orange colorway of the F21 Pro. There’s also a Cosmic Black option, which has an Oppo Glow design. Both options come with a flat-edge design and look similar to the Oppo Reno 7. Much like the Reno 7, the main camera housing features an Orbit Light for notifications.

The F21 Pro features a 6.43-inch Full HD+ AMOLED display with support for a 90Hz refresh rate. Under the hood, you have a Snapdragon 680 chipset, which is also seen on the Realme 9 4G, the Redmi 10, and even the Reno 7 4G, among others. It packs 8GB of RAM and 128GB of storage. The Oppo F21 Pro also supports RAM expansion of up to 5GB.

Camera-wise, there’s a 64MP main snapper, a 2MP depth sensor, and a 2MP micro-lens. Features like flash snapshot, up to 30x magnification, and more are included as well. A 32MP front camera with the flagship Sony IMX709 sensor is the highlight here. It supports AI Portrait Enhancement, Bokeh Flare Portrait, Selfie HDR, and more.

The Oppo F21 Pro gets its fuel from a 4,500mAh battery with 33W SuperVOOC fast charging support and runs ColorOS 12.1 based on Android 12. Additional details include IPX4 water resistance, a fingerprint scanner, Face Unlock, Air Gestures, and more.

Oppo F21 Pro 5G also comes with a Reno 7-like design with flat edges and dual Orbit Lights. It will be available in two colorways, namely Rainbow Spectrum and Cosmic Black. While the former uses a “three-layer texture and a two-layer coating” manufacturing process, the latter is similar to the 4G F21 Pro’s black color.

It has the same display as the F21 Pro, except it doesn’t support a high refresh rate. The phone is powered by a Snapdragon 695 SoC, coupled with the same 8GB RAM + 128GB storage configuration, along with RAM expansion. The battery size and charging speeds are also the same as the 4G variant.

Much like the F21 Pro, the 5G model also comes with IPX4 water resistance, a fingerprint scanner, Face Unlock, Air Gestures, and more.

Check out the India prices of the Oppo F21 Pro and F21 Pro 5G right here: