While we are already eagerly waiting for the launch of new budget OnePlus TVs, the company has started teasing something new with a teal-colored OnePlus logo (seen above) and the hashtag #NewBeginnings. The company has today shared an official blog post that confirms that it’s for the upcoming OnePlus budget smartphone, the rumored Nord by OnePlus (or OnePlus Z).

In the blog post, OnePlus co-founder Pete Lau revealed that the company is all set to bring “the premium, flagship experience that you’ve come to expect from OnePlus to a new, more affordable smartphone product line.” The product team for OnePlus Nord is led by Paul Yu, who’s known to have headed product development at the company for over five years.

This affordable OnePlus phone series will initially be launched in India and Europe. The company wants to test the waters and start off on a smaller scale before stepping foot into tough-to-sell markets like North America. “As we have always done when we try something new, we are going to start relatively small with this new product line by first introducing it in Europe and India,” says Lau.

There has been no mention of the rumored ‘Nord by OnePlus’ branding until now. The company has even set up a private Instagram account (which we gained access to and you can as well) with the username ‘onepluslitezthing’ to quickly share updates for the upcoming budget smartphone. The username could be a hint for the official name but it feels more like OnePlus poking fun at the myriad of online rumors. 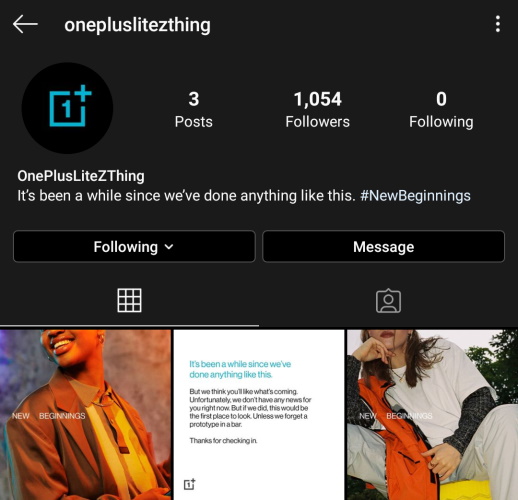 As seen above, there are three posts live on the aforementioned Instagram account. But none of them reveal anything about the OnePlus Nord (or OnePlus Z). It just says, “We don’t have any news for you right now.” We’ll keep an eye out on the Instagram page and bring you latest updates as and when they come in. So, stay tuned for more info on OnePlus’ return to the flagship killer status.