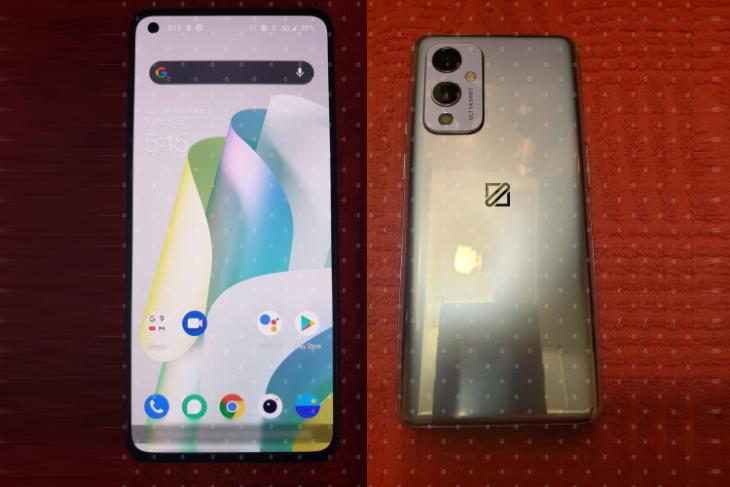 The next OnePlus flagship, the OnePlus 9 5G, has emerged in CAD renders a couple of months ago. It revealed that the device will feature a flat display and triple rear camera cutout similar to the OnePlus 8T. The folks over at PhoneArena have now shared real-life hands-on images of the OnePlus 9 5G. It gives us a closer look at the smartphone from all angles.

The images you see attached above are in line with the leaked CAD renders. The front features a flat display with minimal bezels and a punch-hole cutout at the top left. The OnePlus 9 5G looks exactly like its predecessor on the front. The vertical camera array doesn’t seem to be making a return anytime soon.

The Galaxy S20-like elongated camera island on the rear includes two large camera sensors and a smaller third sensor. There’s an LED flash and the ‘Ultrashot’ branding next to them. You won’t find a 3.5mm audio jack here, as expected. The bottom has a USB Type-C port for charging and speaker grills. The power button, alert slider, and power buttons are located in their usual positions.

Besides the design, PhoneArena has also confirmed the key specs of the upcoming OnePlus 9 5G. The device will feature a 6.55-inch Full-HD+ AMOLED display with a 20:9 aspect ratio, 120Hz refresh rate, and HDR support. It will closely resemble the OnePlus 8T on the front.

OnePlus 9 5G will undoubtedly come equipped with the latest Snapdragon 888 chipset under the hood. It will be coupled with at least 8GB of RAM and 128GB of storage, as per the report. The device will run Android 11-based OxygenOS 11. You will also find a 4,500mAh battery pack and a 65W Warp Charger in the box.

As for the cameras, it is rumored to include a 16MP selfie sensor in the punch-hole on the front. The rear camera will be helmed by a 48MP primary sensor – the same as the OnePlus 8T. Will OnePlus 9 5G merely be a slightly redesigned version of the OnePlus 8T with the newer Snapdragon chip on board?