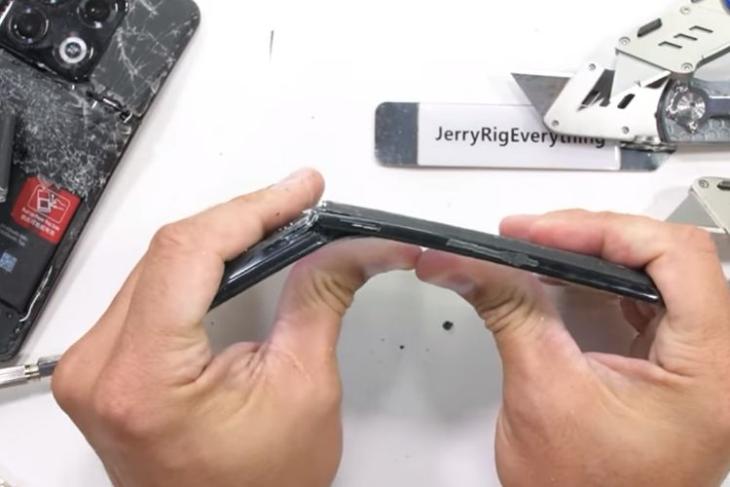 OnePlus recently launched its second flagship of 2022, the OnePlus 10T 5G with the latest Snapdragon 8+ Gen 1 chipset, 150W fast charging, and more. The phone, much like most phones, went for the famous JerryRigEverything durability test and well, failed! Much like the OnePlus 10 Pro, the phone broke into two halves. Check out the details below.

Famous YouTube channel JerryRigEverything conducted a durability test on the OnePlus 10T, which was able to pass the scratch and burn tests easily. The phone got minor scratches at level 6 and major ones at level 7 as part of Moh’s hardness scale, which is pretty standard for most phones.

It also didn’t get any permanent marks after getting subjected to the heat of the lighter. Then came the bend test and this is where one would expect something good too. If you are wondering why then you should know that back in February, the OnePlus 10 Pro took the same test and miserably failed as it broke into half. Months later, it’s only right to expect some improvements with the OnePlus 10T.

However, it seems like the phone has followed the footsteps of its sibling. Upon putting some pressure, the phone got a crack right below the rear camera setup and more pressure led it to break into two halves with just bare hands.

The phone’s glass panel was further removed to showcase its internal components. By the way, it’s made up of both plastic and metal, and the back panel is made up of glass. You can check out the entire video below to see the disappointment for yourself.

While bending a phone with utmost force is not what a regular user would do, the OnePlus 10T succumbing to the act only proves how weak it is. Plus, it also raises questions about the durability of the OnePlus phones, and maybe, this is something the company should focus on.

So, what are your thoughts on the OnePlus 10T’s failed durability test? Let us know in the comments below.

In response to the OnePlus 10T’s recent durability test, OnePlus, in a statement to Beebom, said, “The OnePlus 10T 5G meets or exceeds all of OnePlus’ extensive durability testing procedures, this includes a pressure test where the device is suspended while weight is applied to its center on both its front and back. The OnePlus 10T 5G has an enhanced structure engineering design and can bear over 45kg of external force in this test at OnePlus’ lab.”

“When designing, engineering, and manufacturing OnePlus devices, we ensure they not only offer a design that is beautiful and burdenless but is also durable so they can withstand everyday usage,” OnePlus further adds.