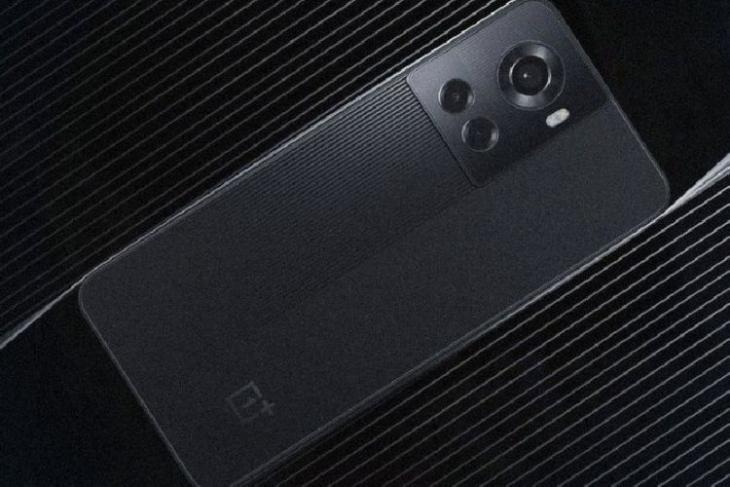 OnePlus is soon expected to launch the OnePlus 10R at its April 28 event in India. Ahead of this, the smartphone’s design seems to have been leaked via an Amazon India advert, giving us our first look at the OnePlus 10R’s rear panel.

As per a Twitter user, an Amazon India ad has inadvertently (or not) leaked the back panel of the OnePlus 10R. The image shows a design, which is totally different for a OnePlus smartphone but is something we have already seen with the Realme GT Neo 3. But, there are some modifications.

As result, you get a dual-textured back panel with three camera housings arranged in a triangle. To recall, the GT Neo 3 gets a rectangular camera hump with the same arrangement and features a differently-styled rear. There’s no word on the front part, but it could most likely feature a center-placed punch-hole screen. Here’s a look at the OnePlus 10R’s leaked rear panel design.

Coming to the rumored specs sheet, it was recently suggested that the OnePlus 10R will be powered by a MediaTek Dimensity 8100 chipset, much like the Realme GT Neo 3. Previous rumors have also hinted at a 6.7-inch Samsung E4 AMOLED display with support for a 120Hz refresh rate.

We can expect three rear cameras, including a 50MP primary lens, an 8MP ultra-wide lens, and a 2MP macro camera, along with a 16MP selfie shooter. The phone is also likely to support 150W fast charging, Android 12-based OxygenOS 12, NFC support, stereo speakers, and more.

One thing to note is that OnePlus hasn’t confirmed the design or the specs of the OnePlus 10R. There are chances it could be some other OnePlus phone in the leaked ad, which could launch in India on April 28. To get some official details, we will have to wait for OnePlus to reveal some details. Hence, stay tuned, and do let us know your thoughts on the possible OnePlus 10R design in the comments below.