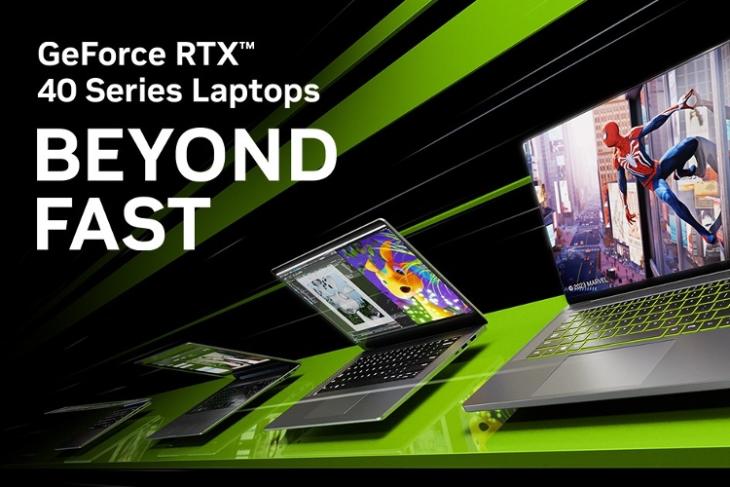 Nvidia has finally unveiled the RTX 40 series GPUs for laptops at the CES 2023 event. Along with that, the company also announced a reasonably-priced RTX 4070 Ti GPU for desktops. This year, with the new Ada Lovelace architecture, we are hearing great things about the power efficiency numbers of Nvidia’s new GPUs. Read on to learn more about all the new GPUs introduced by Nvidia.

The newly-launched Nvidia RTX 40 series GPUs for laptops are a breakthrough in terms of both performance and power efficiency. According to Nvidia, the laptop GPUs based on Ada Lovelace architecture consume one-third of the GPU power, compared to the previous-generation models. All the while delivering better performance and much-improved DLSS 3 upscaling. There is also support for AV1 hardware encoding/decoding on all the RTX 40 series mobile GPUs.

The RTX 40 series mobile GPUs are packed with the lowest voltage GDDR6 memory, which in turn reduces power consumption significantly. In addition, the tri-speed memory controller allows the GPU to go into a low-power memory state dynamically. Moreover, the fifth-generation Max-Q technology promises to enhance the battery life by up to 2x.

As for performance, the top-tier mobile GPUs like RTX 4090 and 4080 come with 9728 (16GB GDDR6) and 7424 (16GB GDDR6) CUDA cores, respectively. Naturally, they perform much better and can handle three 4K monitors at 60fps while gaming. Gamers can also stream their gameplay in 4k60fps with AV1 encoding. Not to mention, due to the dual encoders, the video export time is cut to half. The Nvidia RTX 4090 and 4080 will be available in the market, beginning February 8 and the initial price will start at $1,999.

Moving to mid-tier laptop GPUs including RTX 4070, 4060, and 4050, you have 4608 (8GB), 3072 (8GB), and 2560 (6GB) CUDA cores, respectively. Nvidia says that these mobile GPUs are perfect for 1440p gaming and can deliver up to 80fps. Moreover, the rendering process of scenes in Blender has been reduced to just 10 minutes from two and a half hours. You can also play graphics-intensive games like Cyberpunk 2077 with ray tracing and DLSS support. Among these laptop GPUs, RTX 4050-powered laptops will hit the market, starting February 22 and the price will begin at $999.

When Nvidia released RTX 4090 and 4080 GPUs, their sky-high pricing put off many users. Thankfully, now, the company has introduced a new RTX 40 series desktop GPU, which is reasonably priced. The RTX 4070 Ti brings huge value for money. It has dual AV1 encoders which will reduce the video export time by half while using programs like Adobe Premiere Pro, DaVinci Resolve, and OBS. If you are unaware, the RTX 4070 Ti is actually a rebranded version of the RTX 4080 12GB version.

Apart from that, it delivers up to 70% better performance in 3D rendering programs like Autodesk Maya, Blender, Chaos V-Ray, Epic Games Unreal Engine, and Unity. And the 4th-generation Tensor Cores for AI tools have doubled the performance, compared to the previous generation. The Nvidia RTX Ti GPU will be available starting January 5 at $799.

CES 2023: FluentPet Connect System Lets You Communicate With Your Dog

CES 2023: The Fufuly Cushion Can Calm You and Reduce Your Anxiety in 5 Minutes