Launched back in 2010, Musixmatch has rapidly grown on to becoming the best lyrics finder service for any platform. Focused primarily on lyrics finding, the app offers a plethora of other features, including identifying the music playing around you, creating lyrics-cards to easily share your feelings with your friends, a powerful inbuilt music player and much more. The lyrics database of Musixmatch is linked with azlyrics, which is the best source for finding lyrics using a web browser.

While Musixmatch scores high in all aspects, one thing that spoils the user experience is the way ads have been implemented in the app. Annoying ads popping up in every few intervals and disrupting the music really spoils the whole experience of using it. While you can get rid of the ads by getting a premium membership ($1/month or $6/year), it’d be worth your time to check out some other free Musixmatch alternatives. So, if you are looking for a lyrics app like Musixmatch, we bring to you 5 apps like Musixmatch that you can use.

Essentially a clone of Musixmatch in most ways, Lyrics Mania is the app that comes the closest to Musixmatch. Consider Lyrics Mania to be your Instagram Stories if Musixmatch is your Snapchat. Each and every feature that exists in Musixmatch also exists in Lyrics Mania. Forgive me for saying this but I feel it has been implemented in a much better fashion in the latter one.

From automatic lyrics grabbing to Music ID, Lyrics Mania can do everything. Like Musixmatch, Lyrics Mania also features the ability to create images with quotes from the song’s lyrics and terms it as – Postcards. Also, there is a Charts option that basically shows you the trending music from all around the world. 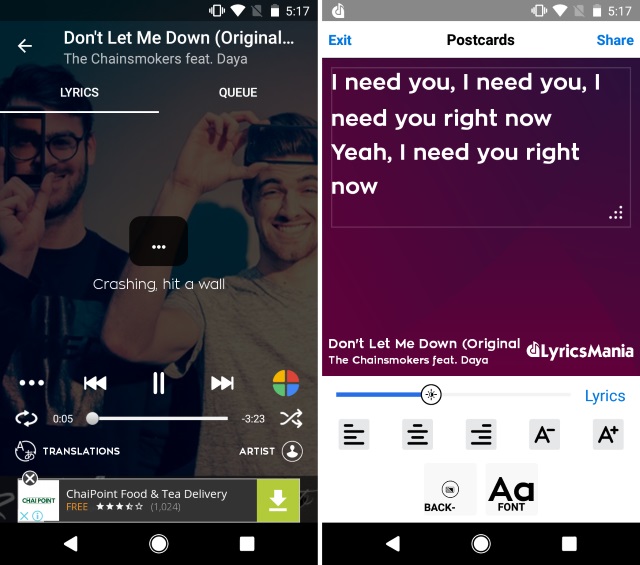 As stated above, Lyrics Mania is like Musixmatch, and henceforth are the ads. That being said, the ad system in Lyrics Mania is not as annoying as Musixmatch’s, and if you’re interested in removing the ads completely, a premium membership is available for $1/month or $6/year, which is equivalent to Musixmatch’s pricing options. Though, if you were to take my word for it, Lyrics Mania is probably your best bet, for I personally feel it provides a much better UI than that of Musixmatch.

Genius is the world’s biggest community for music IQ, comprising of both users as well as professional artists. Genius aims to provide its users with the background story of the song along with the lyrics. Also, like Musixmatch, the Genius app also features the ability to identify music by recording the song and then searching across its database for a match. 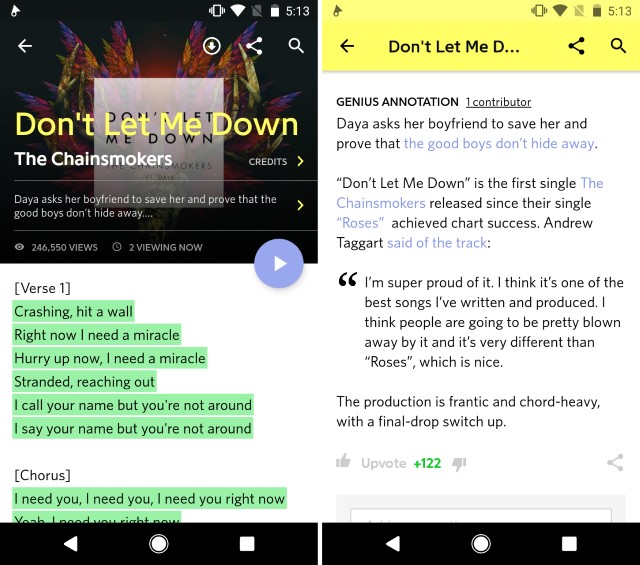 While Genius’ database may not be as big as azlyrics, it is not that far behind either. The Genius app is also compatible with most music players out there – major or minor. So rest assured, you’ll still have the lyrics for almost your entire library.

If you’ve used the Musixmatch app before, you must be familiar with how the lyrics system in it works. It doesn’t matter whether you’re playing your songs using the inbuilt music player or any other player, to save the lyrics offline, you need to open the lyrics interface of Musixmatch. Having to open each song individually to download its lyrics is a rather tedious task. Furthermore, in a situation where you are deprived of internet access, only the lyrics of the songs that you’ve earlier heard using Musixmatch will be displayed. This is a problem that Quicklyric aims to solve quite effectively.

You see, Musixmatch downloads the lyrics for only the song that is currently playing. Quicklyric, on the other hand, scans your media library for all audio files and then searches its database for matching lyrics. Quicklyric essentially downloads all the lyric files at once and stores them offline for easy accessibility. Other features include a karaoke mode, a night mode for easy reading and multiple themes. 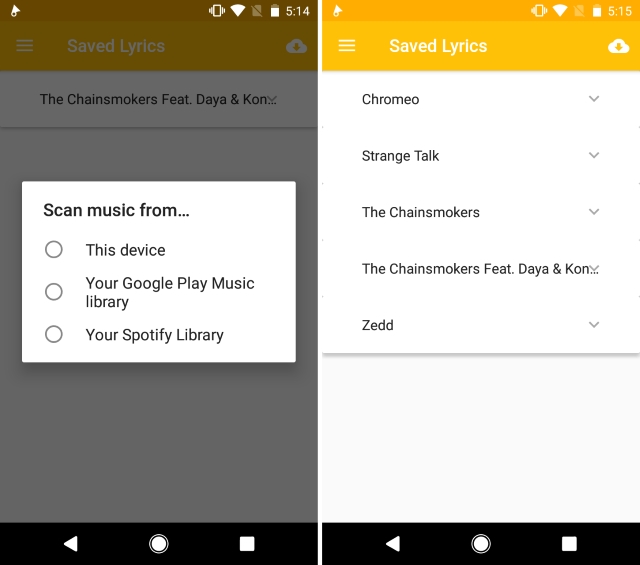 While the app is free to use, you can the premium version to get rid of ads and avail support for Android Wear as well, all for $1.99/month or $4.99/year. Nonetheless, the ads implementation in Quicklyric is minimal. So unless you want to support the developer, feel free to stick to the free version.

Lyrics of a song are generally hosted on public community domains only, such as Musixmatch’s azlyrics. Instead, Lyrically is an app based on a lyrics database publicly hosted on Wikia, a wiki hosting service. The site is free of charge, famous for publishing most user-provided text under copyleft licenses. Lyrically is powered by fans, with automatically updated with fresh and accurate content directly from Lyric Wikia.

Lyric Wikia is a robust community of more than a million accurate lyrics, constantly updated by the community’s user base. Like other apps on this list, Lyrically does not feature its own player but brings you the lyrics no matter which music player you are using. 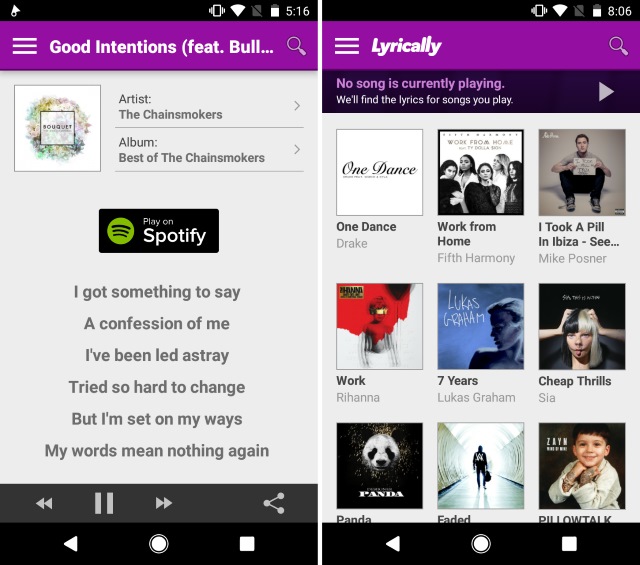 The app also features a Top Tracks column, allowing you to browse through the latest and hottest tracks currently. While the lyrics database is still growing as compared to Musixmatch’s huge database, the UI of Lyrically is fluid and has minimal ads.

In the thirst of adding more and more features to their app, developers usually lose focus on the simplest of things. They end up adding pointless features that the average user may never make full use of. That’s where Lyrics Grabber comes in. It is probably the only Musixmatch alternative which follows the minimalistic approach and executes it just so perfectly.

The whole idea behind using a lyrics finder app is to be able to quickly search for the lyrics of a particular song, something which Lyrics Grabber does impeccably. While it may not come with added features of Musixmatch like a music identifier, or inbuilt media player, or even an advanced UI; Lyrics Grabber is best at what it does – finding lyrics for your tracks. 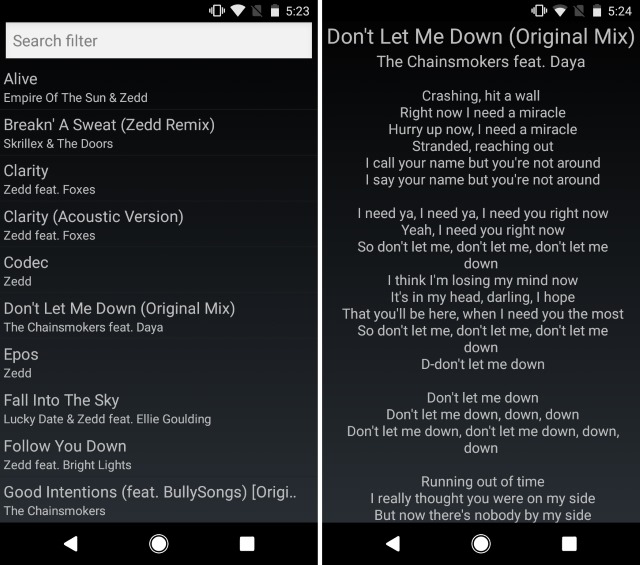 The app comes with a powerful engine that scans the media that is currently playing and gives you the lyrics for it. Alternatively, you can simply start up the app, and it will present you with a list of all the tracks on your device. The app will then automatically fetch the lyrics for each one of them. A notable feature is that its primary source is azlyrics, which is also the source for Musixmatch. Standing tall at just 53 KB, Lyrics Grabber is one the smallest, simple yet effective lyrics finder out there.

SEE ALSO: 10 Best Android Music Players You Can Use

Fed up with ads in Musixmatch? Try out these Musixmatch Alternatives

There is no doubt that Musixmatch is a great lyrics finder app, as well as a decent music player app. That being said, the implementation of ads in the app is extremely poor, which totally demolishes the user experience. Well, we believe that our list of apps like Musixmatch should work well enough to satisfy your various interests. So, try out these Musixmatch alternatives and let us know your thoughts and if there’s an app we might have missed out on in the comments section below.