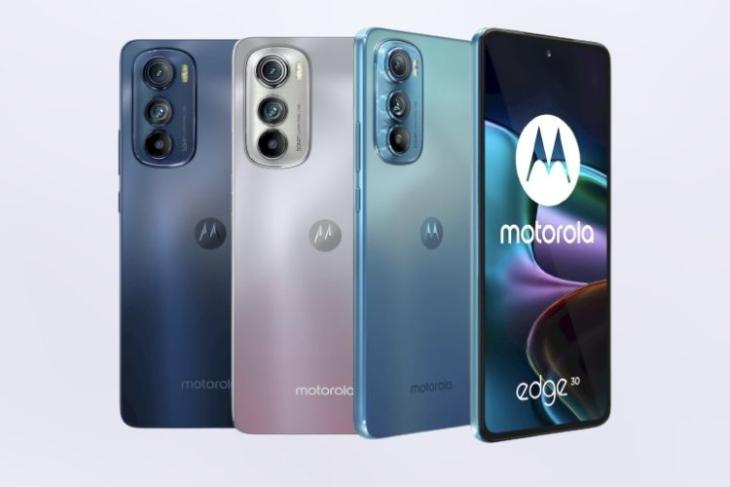 Following the launch of its flagship Moto Edge X30 late last year in China and even in India, Motorola has now officially announced the launch of the vanilla Moto Edge 30 that will come as a toned-down version of its elder sibling with a Snapdragon 700-series chipset, 144Hz display, and more. Check out the details below.

The Moto Edge 30 is similar to the Moto Edge 30 Pro in many ways. However, Motorola had to cut some corners due to the lower price tag of the device, which is almost half the price of the Edge 30 Pro. So, instead of the 6.7-inch Full HD+ display on the Edge 30 Pro, the vanilla model comes with a smaller 6.5-inch Full HD+ AMOLED display. However, you will still get the support for the 144Hz refresh rate, DCI P3 color gamut, and HDR10+ for the 10-bit panel.

At the front, there is a 32MP selfie snapper with pixel-binning technology. The back of the device rocks a triple-camera setup, including a primary 50MP lens with All-Pixel AF and OIS, a 50MP ultra-wide lens with a 118-degree FOV, and a 2MP depth sensor. You will be able to try out features like the Portrait mode, Dual-Capture, Super Slow Motion, Face Beauty, and more.

Under the hood, unlike the Edge 30 Pro that packs the Snapdragon 8 Gen 1 SoC, the Moto Edge 30 comes with a Snapdragon 778G+ processor, which launched as an overclocked variant of last year’s SD 778 5G chipset. It is paired with 8GB of RAM and up to 256GB of internal storage, with no room for expansion. Unfortunately, the device also does not come with a 3.5mm audio jack.

Coming to the battery, the Edge 30 packs a 4,020mAh battery with support for 33W fast charging, which is much smaller than the 4,800mAh battery inside the Pro variant. Additionally, the device supports Motorola’s “Ready For” feature that lets users mirror their phone screen to an external device.

Other than these, the Moto Edge 30 supports dual-SIM and 5G, Wi-Fi 6E, Bluetooth version 5.2, NFC, USB Type-C, and more. In fact, Motorola claims that it is the thinnest 5G smartphone, coming in at 6.79mm. The device is also IP52-rated for water and dust resistance and runs near-stock Android 12 with the company’s My UX 3.0 skin on top. It comes in three color options (Meteor Grey, Aurora Green, Supermoon Silver) with a gradient finish.

The Motorola Edge 30, as mentioned before, has been priced at €450 (around Rs 36,579). The device will soon launch in multiple regions and countries, including Europe, India, the Middle East, Latin America, and Australia.

More details will be revealed in the coming days, so stay tuned. Also, let us know your thoughts on the Moto Edge 30 in the comments below.