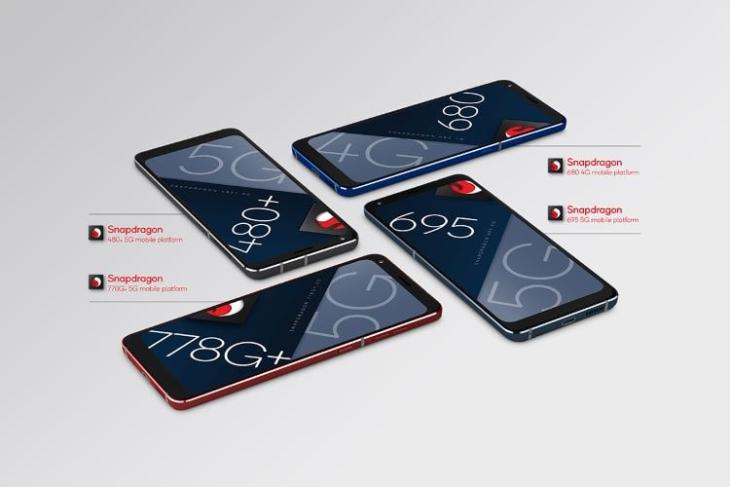 Qualcomm has today announced an upgraded version of its Snapdragon 778G chipset. The new chipset, dubbed as the Snapdragon 778G+ 5G, has been unveiled along with other new ‘Plus’ upgrades and chipsets under the 400- and 600-series, respectively. Let’s take a look at each of the new SoCs that Qualcomm announced today.

Starting with the Snapdragon 778G+ 5G, the new chipset is pretty similar to its predecessor. For instance, the 778G+ chipset, much like the 778G chipset, is based on Qualcomm’s Kryo 670 CPU cores. However, as per the company, the cores can now reach a clock speed of up to 2.5GHz, compared to the 2.4GHz clock speed of the standard 778G chipset.

Furthermore, the new 778G+ chipset features the same Adreno 642L GPU as the previous-gen chipset. Qualcomm, however, claims that the new 778G+ can deliver 20% better graphical performance than its predecessor. Other components like the 5G modem, ISP, and AI components are the same as the 778G chipset.

Next up, is the Snapdragon 695 5G chipset that replaces the Snapdragon 690 chipset that Qualcomm unveiled last year. The new chipset, as per the company, supports both sub-6GHz 5G and mmWave 5G and offers up to 30% improvement in the graphics department, courtesy of the Adreno 619 GPU (as opposed to the 619L GPU on its predecessor) onboard. It is based on the company’s Kryo 660 CPU cores (upgrade over Kryo 560 cores on Snapdragon 690) and provides a 15% improvement in CPU performance.

Along with the Snapdragon 695 5G chipset, Qualcomm also introduced a new 4G chip dubbed as the Snapdragon 680. It is based on the 6nm architecture, features Qualcomm’s Kryo 265 CPU cores, and the Adreno 610 GPU. The chipset also comes with FastConnect 6100 Subsystem, QC3 support, Spectra 246 ISP, and a Snapdragon X11 LTE modem. The Snapdragon 680 4G is to cater to budget-focused 4G smartphones that aim to offer FHD+ displays with support for a peak screen refresh rate of 90Hz.

Lastly, Qualcomm unveiled an upgraded version of the Snapdragon 480 chipset introduced earlier this year. Snapdragon 480+ 5G comes with slight improvements compared to its predecessor and is built using the 8nm process. It features the Kryo 480 CPU cores and Adreno 619 GPU. So, it is designed to offer better CPU and GPU performance than the previous-gen Snapdragon 480 chipset.

With this chipset, Qualcomm is aiming to cater to the budget 5G smartphone market. The chipset supports up to Full-HD+ displays with support for a peak refresh rate of 120Hz. It also packs the Snapdragon X51 5G model RF-system, the Spectra 345 ISP, and QC4+ support.

So, these are the new Snapdragon chipsets that Qualcomm introduced today. These new chipsets will be available in the market soon and we can expect to see new smartphones from companies like Honor, Oppo, Vivo, Xiaomi, and HMD Global in the coming months.