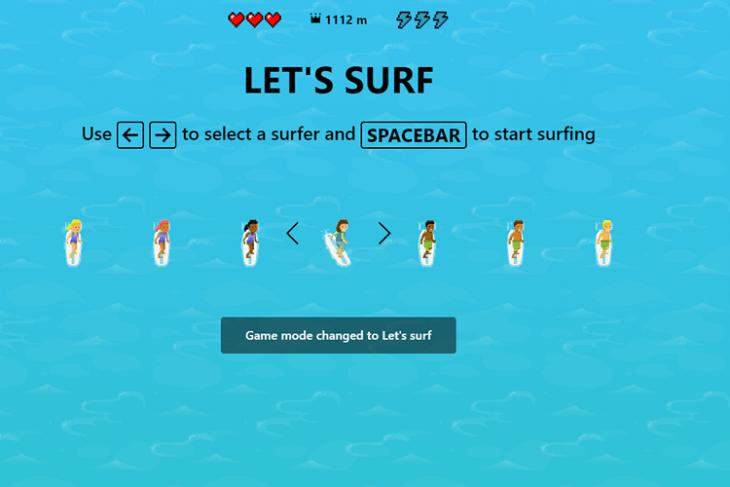 It appears like Google Chrome’s offline Dino game finally has a worthy opponent. Microsoft’s Chromium Edge team has baked in a cool Surf game in the browser. The game is currently live on Canary and Dev channels of Chromium-based Edge.

William Devereux, senior product manager for the project took to Twitter to tease the new game. The Surf game comes with three game modes namely Let’s Surf, Zig Zag, and Time Trial. The game has powerups that you can activate by pressing the ‘F’ key.

Let’s Surf is an unlimited runner mode where your objective is to keep playing to break your own high score. In the Time Trial mode, you’re supposed to reach the end of the course at the earliest. You will be passing through as many gates as possible in Zig Zag mode.

The edge://surf game is now available as the offline game in Microsoft Edge! We've made a ton of improvements based on your feedback. Here's what's new in Canary/Dev:

On top of all these, the game supports keyboard, mouse, touch, and even gamepad inputs. If all these sound interesting to you and you’re running developer or canary builds of Chromium-Edge, you can play Surf game right now by visiting edge://surf. The game will eventually be brought to the stable version of Edge.

In my opinion, this new Surf game is far advanced, better, and sophisticated in comparison with Chrome’s T-Rex game. I tried playing the game on my laptop running Microsoft Edge developer build and I can guarantee that you won’t be disappointed with this. Plus, it’s another reason to switch to Edge.

Devereux mentions this game was designed and built by a few people in their free time. It is worth applauding the efforts of the developers behind the scenes for bringing this fun game to Edge.