Skip to content
Home Reviews Xiaomi Mi A2 Performance and Gaming Review: Nothing Too Remarkable

Xiaomi recently launched the Mi A2 in India, packing mid-range specifications at an affordable price. The smartphone, which is the successor to the popular Mi A1 from last year, offers a stock Android experience unlike other devices from the Chinese manufacturer. Priced at Rs. 16,999, the smartphone comes with the Qualcomm Snapdragon 660 SoC coupled with 4GB RAM and 64GB of internal storage. On paper, the Xiaomi Mi A2 seems like a decent mid-range smartphone, which will take on the likes of the Redmi Note 5 Pro, the Nokia 6.1 and the Asus ZenFone Max Pro M1. So if you’ve been wondering how the smartphone performs in real-world use and, most importantly, while gaming, then you’ve come to the right place. We’ve put the Mi A2 to the test so that you can be sure if you should spend your hard earned cash on the new device or perhaps invest in a different one. Let’s jump right into the Mi A2 performance and gaming review and find out:

While we aren’t staunch believers of synthetic benchmark scores, we know that it holds some importance to quite a few of you. So, before testing out the device’s performance in real-world use, we ran it through the usual set of benchmarks in order to get a preliminary reading on the performance.

As soon as we got the Mi A2 out of the box, we installed AnTuTu, Geekbench 4 and 3DMark on the device to check its benchmark scores before proceeding any further. The scores delivered by the Mi A2’s hardware are quite in line with what we’d expect from a mid-range device rocking the Snapdragon 660 along with 4GB of RAM. Starting off with AnTuTu, the Mi A2 managed to score a respectable 129863 which, when compared to the Redmi Note 5 Pro’s 113131, the ZenFone Max Pro M1’s 115299 and the Nokia 6.1 Plus’ 115398, is just a tad bit better. Considering the fact that the Mi A2 packs in a Snapdragon 660, as opposed to the Snapdragon 636 on all the other device, it’s score is hardly a surprise. 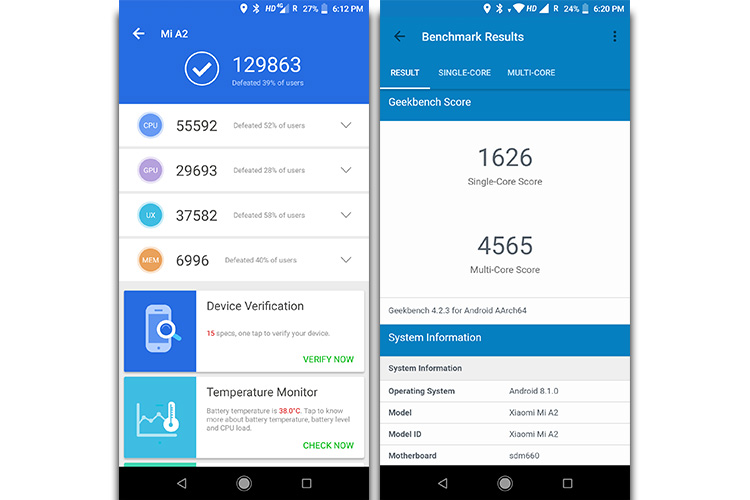 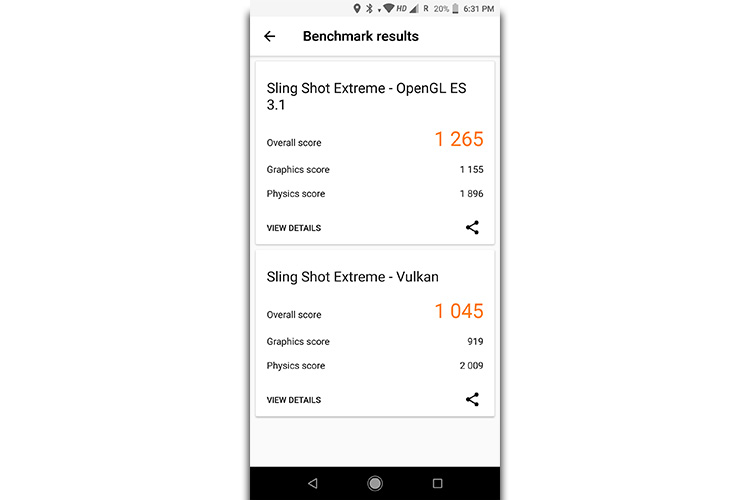 While synthetic benchmarks are good enough for a preliminary assessment of any device, they don’t quite draw the most accurate picture about the device’s actual performance in day to day use. In order to test that out, we played quite a few games on the Mi A2, including PUBG Mobile, Asphalt 9: Legends, Tekken and Breakneck. The Mi A2, quite surprisingly, failed to keep up with competing devices. While at first the device’s gaming performance was quite great, within a couple of days it started lagging and freezing when burdened with intensive games or benchmarks.

I played a couple of games of PUBG Mobile on the device and it performed reasonably well at first, however, it did face some problems loading artifacts at the beginning of the game, which might be because of some RAM limitations. The loading improved significantly once I got into the game and the overall performance wasn’t marred by any lags or stutters. After using the device for a couple of days I noticed that it started lagging quite a bit and after playing two or three games of PUBG back to back it froze completely, forcing me to restart it by holding the power button. 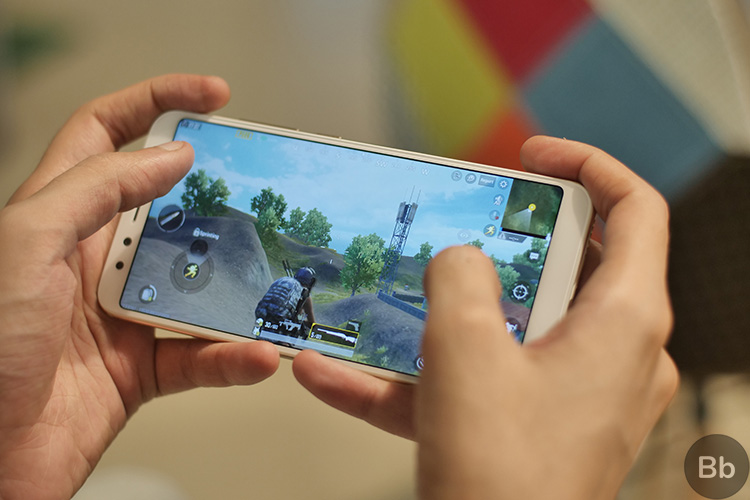 Asphalt 9: Legends also worked without any issues at first and I didn’t experience any lag or frame drops. However, when I played over ten races in a single stretch, the device started to act up once again. When I played Asphalt 9 and PUBG back to back, the device started heating up and the top half of the back reached 41 degrees, making it uncomfortable to hold.

Playing lighter titles like Tekken and Breakneck, I didn’t notice the same issues and the games ran as smoothly as you’d expect from a device with mid-range hardware. Compared to the Redmi Note 5 Pro and the ZenFone Max Pro M1, the Mi A2 performs significantly worse and I guess it has something to do with the poorly optimized Android One ROM. On the other hand, the Nokia 6.1 Plus, which is also an Android One device, didn’t face any such issues.

SEE ALSO: Top 6 Xiaomi Mi A2 Alternatives You Can Buy

Xiaomi Mi A2 Performance and Gaming Review: Much Like Any Other Mid-Range Device

Even though the Xiaomi Mi A2 (Rs. 16.999) packs in a more recent processor compared to other mid-range smartphones available in the market today, its performance is just atrocious. I was expecting the device to do far better than the competition, probably because it runs stock Android, but that wasn’t the case. I was also quite surprised as the Snapdragon 660 on the Mi A2 lagged behind in multi-core scores, compared to the Snapdragon 636.

This lead me to believe that Xiaomi has had some problems optimizing stock Android for the device, which was the case with the previous-gen Mi A1. In order to test that, I compared the Mi A2’s performance with Mi 6X, which is the MIUI variant of the device, and I faced no such issues. Not only does the Mi 6X fare better in benchmarking apps, but it also doesn’t lag or freeze while playing intensive games. Hopefully, Xiaomi should fix this with a future update. Having said that, for now, in case you’re in the market for a mid-range device which offers great performance, you should definitely consider anything other than the Xiaomi Mi A2.

Top 6 Xiaomi Mi A2 Alternatives You Can Buy

Xiaomi Mi A2 ‘Pre-Order Sale’ Ends in Minutes on Amazon and Mi.com

Xiaomi Mi A2 India Launch: Here’s How to Watch Live

Xiaomi Mi A2 Will Be Amazon Exclusive in India