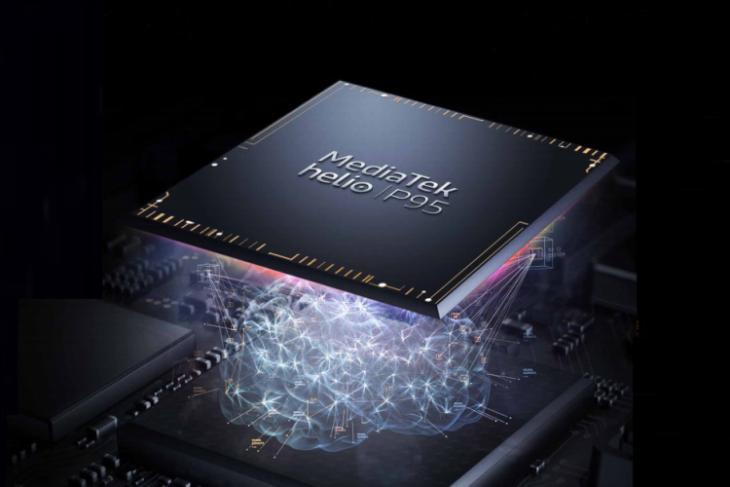 MediaTek has been beefing up its mid-range chipset lineup over the past few months. It launched the Helio G90, G80, and G70 gaming-centric chipsets to make it possible for a wider audience to enjoy high-end gaming. But, the chipmaker has today unveiled a new addition for the well-known Helio P-series, the Helio P95, which brings support for up to 64MP camera, 21:9 displays, and a lot more.

MediaTek Helio P95 is an octa-core chipset, with two high-performance ARM Cortex-A75 cores clocked at up to 2.2GHz and six efficiency ARM Cortex A-55 cores clocked at up to 2.0GHz. It’s a successor to the Helio P90 chipset that was introduced last year. You also have an Imagination PowerVR GM 94446 GPU on board, which should offer you a 10% performance bump over its predecessor, as per MediaTek.

One of the highlights of the Helio P95 chipset is the new AI processing unit, APU 2.0, which can help achieve a 10% increase in benchmark performance in comparison to the previous-gen chipset. The chipset also supports up to 8GB of LPDDR4x RAM and UFS 2.1 storage.

There’s now also a triple ISP, which is capable of 14-bit RAW and 10-bit YUV processing, present on board. The chipset supports up to 64MP cameras or a 24+16MP dual-camera systems, along with AI enhancements, such as AI-NR, improved portrait capture due to hardware depth engine that’s 6X faster and 2.25X higher resolution.

Helio P95 comes integrated with the ‘MediaTek HyperEngine’ for improved performance, “intelligent networking, rapid touchscreens and vivid visuals,” as per the official website. The chipset also supports displays with resolution up to 2520 x 1080 pixels, with a 21:9 aspect ratio.

MediaTek did not discuss any timeline for the release of smartphones powered by Helio P95, but the rumor mill suggests that Oppo Reno 3 Pro, launching on March 2 in India, would be the first phone to be powered by this new chipset. Oppo is yet to confirm the same, so we suggest you take this leak with a grain of salt.