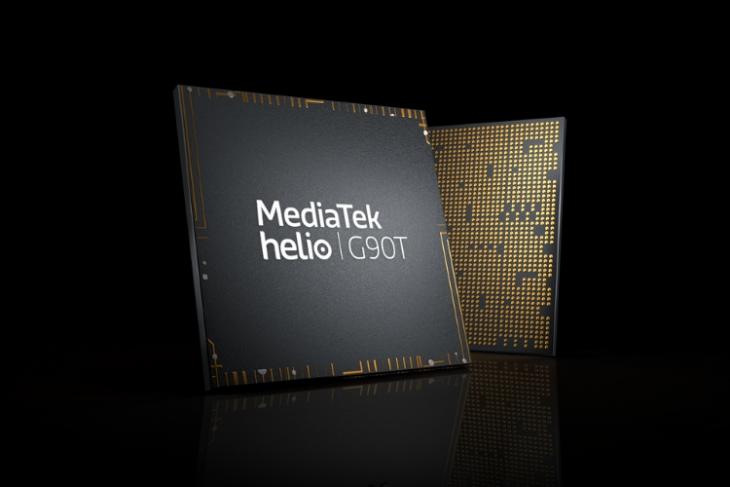 The mobile gaming industry has swelled exponentially over the past year, thanks to one battle royale title, witnessing a major shift in what users desire from their smartphones. This led Qualcomm to unveil their first-ever gamer-centric chipset earlier this year. Well, the American chipmaker has since also launched a souped-up variant of its Snapdragon 855 flagship chipset as well.

MediaTek has been rumored to be launching a new chipset to take on Qualcomm’s ever-growing dominance. And well, it’s doing just that with the launch of its first dedicated gamer-centric Helio G90 and G90T chipset. They’ll enable low-latency, stutter-free gameplay and better performance at lower price points.

MediaTek Helio G90 series includes octa-core chipsets, which utilize the Cortex-A76 and Cortex-A55 CPU architecture. These are paired with the Mali-G76 3EEMC4 GPU, with speeds of up to 800MHz. This is higher than even the 672MHz overclock speed of the Adreno 640 GPU in Snapdragon 855 Plus. You can include up to 10GB of LPDDR4x RAM, with peak frequency up to 2133MHz. MediaTek has also bundled a large L3 cache and is offering speeds up to 2.05GHz for smoother gameplay and app performance.

Boasting about the capabilities of the new Helio G90 chipset, TL Lee, General Manager of MediaTek’s Wireless Communication business unit in an official statement said, “With the Helio G90 series, you get a super-fast and responsive display, reduced lag for smoother gameplay – because every millisecond counts in the gaming world. Whether it’s Fortnite, PUBG or other top titles, this chip is a gaming powerhouse.”

One of the most striking features of the Helio G90 & G90T chipsets has to be MediaTek’s HyperEngine game technology. It’s a software feature which is said to ‘tune the entire smartphone for the greatest gaming experience possible.’ HyperEngine is a collection of software features that sees to the fact that the gameplay isn’t hampered in any possible way.

MediaTek Helio G90 will allow the smartphone to connect with two Wi-Fi bands (both the 2.4GHz/5GHz) for improved latency, won’t drop the data connection when you receive a call, and kick in WiFi+LTE concurrency when the network quality starts to degrade. This chipset also packs a rapid response engine to improve in-game action-to-display speeds using touch acceleration.

Moving past the hardware specs, the Helio G90 series also supports up to 64MP cameras because that’s the latest fad. Phone makers can use multi-camera configurations, with a triple-ISP design backing the hardware. This helps optimize power and performance while also offering night shot mode, AI facial unlock, and much more.

MediaTek hasn’t pointed out the difference in the Helio G90 and G90T chipset, but we’re assuming that it’s got to do with peak clock frequency. We should expect to see phones (possibly, first from Realme) powered by the Helio G90 in the next couple of months. Do tell us your opinion on this gamer-centric chipset in the comments below.

MediaTek to Design More Chipsets in India After Helio G90