The biggest USP of Android has been the level of customizability that comes with your device. In the aspect of customizations, theming your device plays a very important role. As such, you might be familiar with Substratum. Up until now, Substratum has been the only way to properly customize your device and change its look completely. Sadly though, as of late, the device has been reported to have analytics built into their app which allows the app to share user-specific data with the developers. While most users don’t really care about it that much, it may sound like a deal breaker for them. Thankfully though, finally, there is an alternative. Enter – LibreSubstratum.

LibreSubstratum is an open-source alternative to the official Substratum app. The app functions in the same way as the normal Substratum app. Based off Sony’s OMS (Overlay Manager Service), the app is compatible with all Substratum theme packages. Currently, the app only has basic overlay support which allows compiling and enabling/disabling of overlays. That being said, the developer has promised to include support for bootanimation, sounds, and wallpaper in the next versions. While still in its beta stage, the app works pretty well. 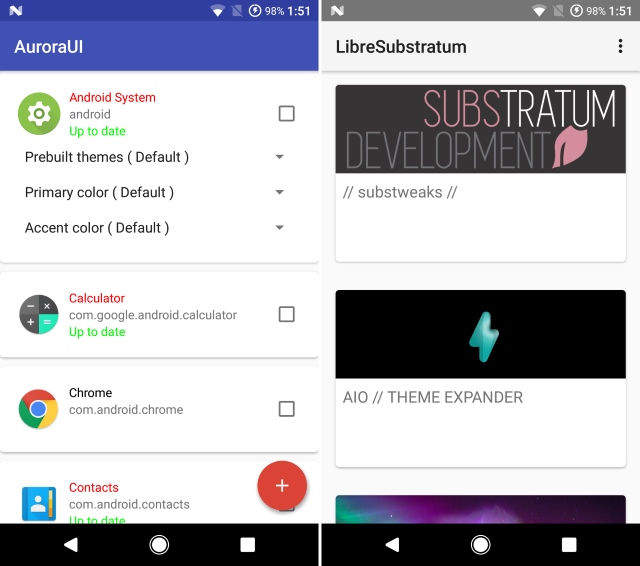 Unlike Substratum, the app currently only supports Android Nougat with full OMS support. This basically means that only custom ROM users can currently try out this app. I tried it on my Moto X Play running AOSP Extended on Android 7.1.1, and to be honest, the app worked way better than the normal substratum package. It’s way faster, themes apply much more fluidly, and overall, everything feels must more simple.

So, what was Substratum’s take at all this? The Substratum team was contacted and were asked about the controversy surrounding their embedded analytics feature. To that, their response was,

“The analytics we use are not user-identifiable, but more related to Google’s own device identification, like whether you are using a Xiaomi or Sony device. The analytics we obtain are crash reports and we only work from there.”

Now while all this does sound satisfactory, the fact is that there is much more to Substratum that I don’t really like. For instance, Substratum recently even introduced paid, closed-source add-ons which can’t be replaced with unofficial reimplementations. As such, I very much prefer the direction in which LibreSubstratum is headed in. But what about you? Are you gonna stick with Substratum, or will you be making the switch to LibreSubstratum? Let us know in the comments down below.

How to Use LibreSubstratum to Theme Android Devices