Android, is the world’s most popular OS and one of the features of Android which sets it apart from the other operating systems out there is the ability to completely customize one’s device to their liking. Android has always been very extensive and customizability is a path both Google and other third party developers have ventured in. In this very aspect, theming plays a very important role. Today we bring to you Substratum, a popular theming choice for the current gen Android devices. First, let’s talk about what Substratum actually is.

As you might be aware, Sony has always provided great theming capabilities in their Xperia lineup. This theming was being carried by Sony’s own framework – Runtime Resource Overlay (RRO). Back in the summer of 2014, Sony provided its code to Google, to be merged as a part of Stock Android. To make use of this framework, Layers was developed. Layers was essentially a simple application used for managing the basic RRO framework, helping users theme their device, while having its own set of restrictions. In the meantime, Sony further worked on OMS (Overlay Manager Service). OMS is a client for managing overlays, allowing the providers to dynamically control priorities and enable/disable overlays. While Layers in itself was a manager as well, OMS proved to be much better and efficient. Finally, Layers was deprecated, and a full-fledged OMS was developed and named Substratum.

Substratum essentially carry forwards the simple usability of the Layers manager with great powers offered by the OMS. As compared to the traditional Layers, overlays are now installed as normal apps to the /data/app partition, and the theming process is completely dynamic.

As mentioned above, Google did merge the basic RRO framework into their Android OS with Marshmallow. That being said, officially, OMS has never been merged into Android. Though, developers that have been building their own custom ROMs, have taken the liberty of merging the complete OMS into their custom ROMs. As such, there are 2 working modes of Substratum – Legacy and Full.

In Legacy mode, the source code of only RRO is merged, and is similar to what Google offers as part of AOSP. In Full mode, the complete code of Substratum’s OMS is merged within the base code of the OS, thus providing more scalability to the user.

How to install Substratum and Theme Android?

1. The first step is to install the “Substratum Theme Engine Root” (Free) from the Play Store just like any normal app. 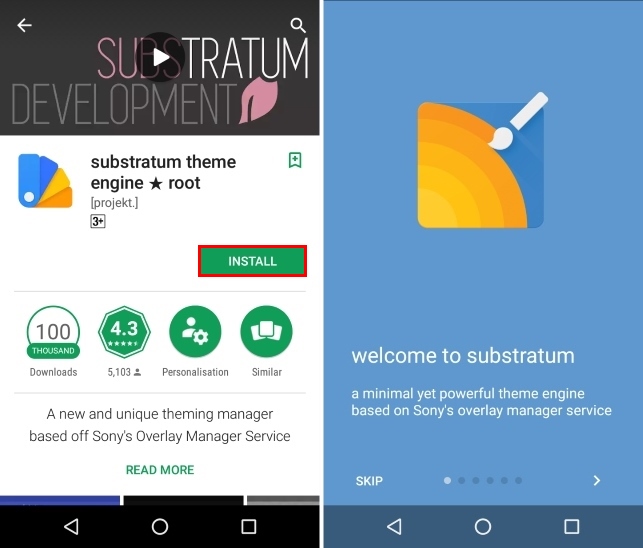 2. The next step is to open up the app and grant it root access and all the other necessary permissions. In case you are running Substratum in Legacy mode, you will get a warning for limited support. 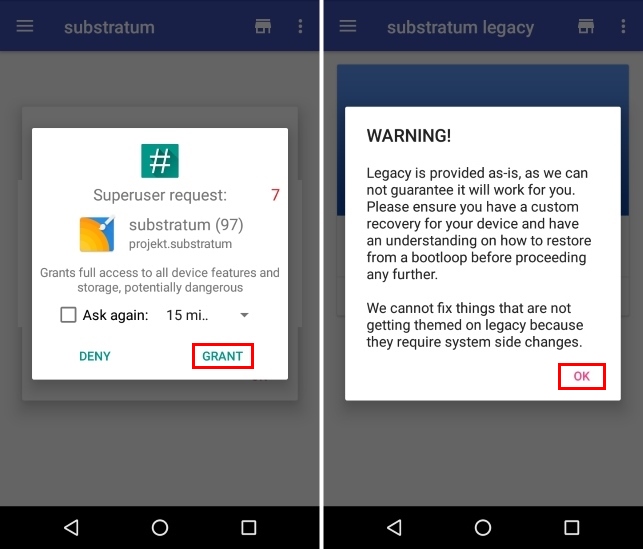 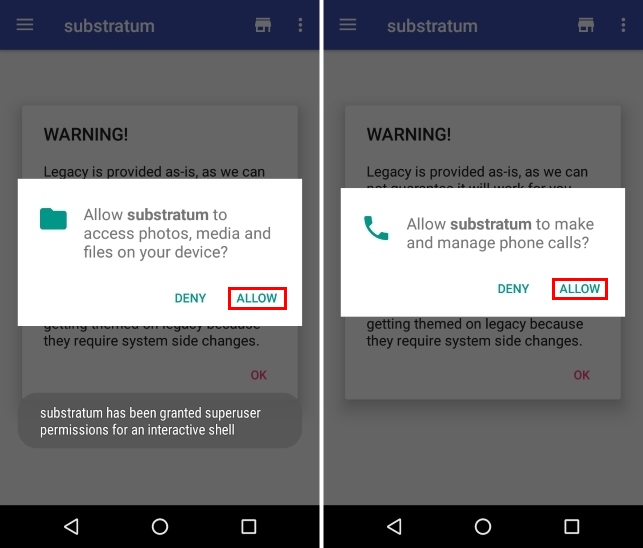 3. Go back to the Play Store and download any Substratum theme of your liking. Here, in this tutorial, we will be using the Greyce theme, which can be found here. Some other great themes available are Compound, Default Dark and PitchBlack. Upon successful installation of the theme, you will get a notification from the Substratum app, which says “Theme successfully installed”. 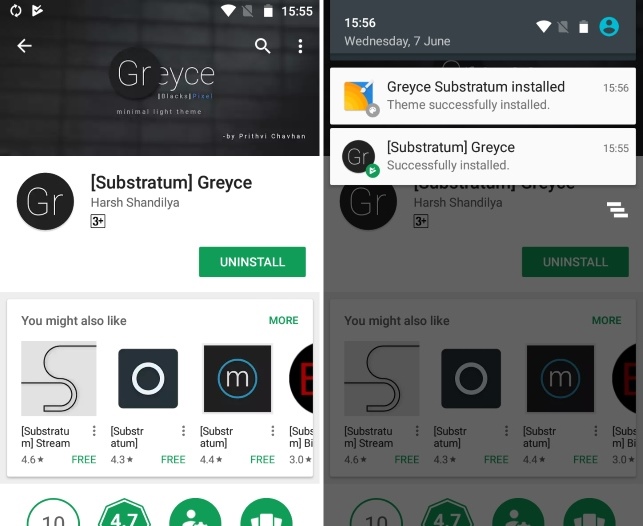 4. After installing a theme, you need to install all the overlays. Head over to the Substratum app, select Greyce theme, and select the overlays of your choice. Overlauys are nothing but the elements you want to theme on your device, like Android Settings, the Android UI, UI of various apps and more. Once selected, tap on the brush icon in the bottom right and select “Install Selected”. Substratum will now begin installing your selected overlays. 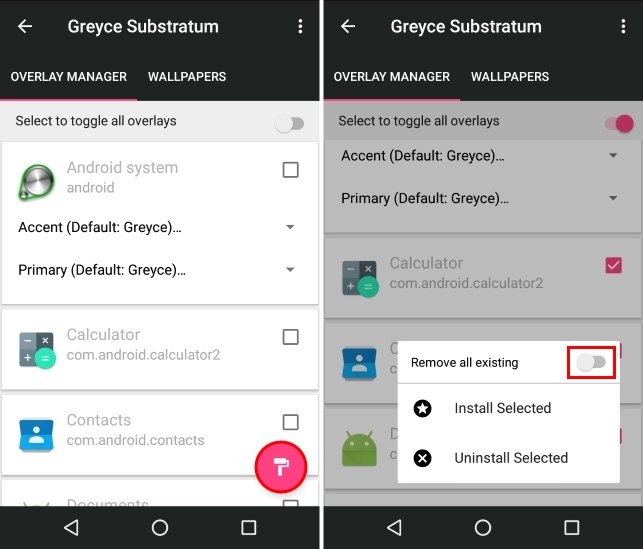 5. Upon successful completion of applying these overlays, you will get a notification for the same. 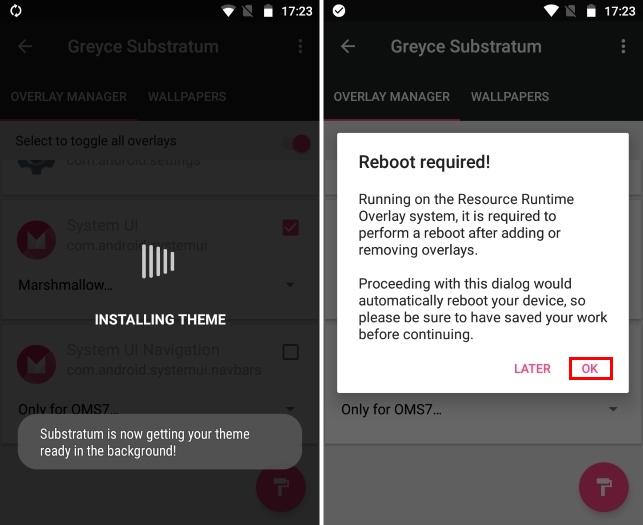 Note: If you’re running Substratum in Legacy mode, you will be required to reboot the device to apply the changes.

6. That’s it, your theme is now applied and you should see changes in your device. You can even use Substratum to install font packs, change boot animations, sounds and wallpapers on your device. 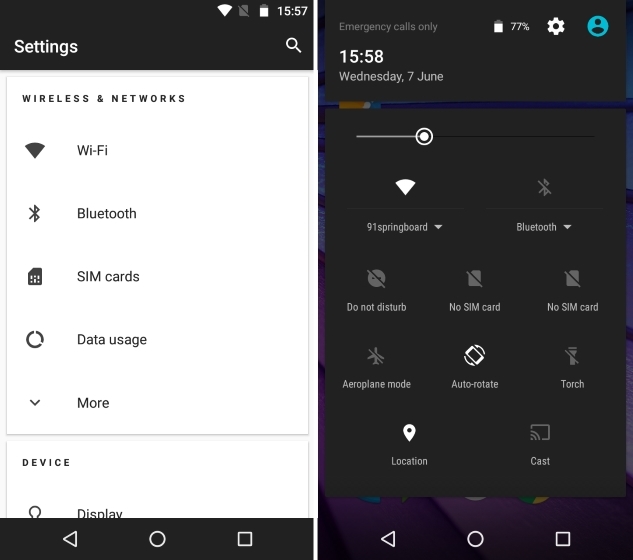 How to Uninstall Selected Overlays?

In case you feel like reverting back to the stock theme, simply open up the hamburger menu from the left, and go to “Advanced Manager” or “Overlay List” (depending upon your Substratum mode). Simply select the overlays you wish to uninstall, then tap on the brush icon in the bottom right corner and tap on “Uninstall Selected”. Substratum will now remove the selected overlays. Once again, depending upon your mode, you may be required to reboot your device. 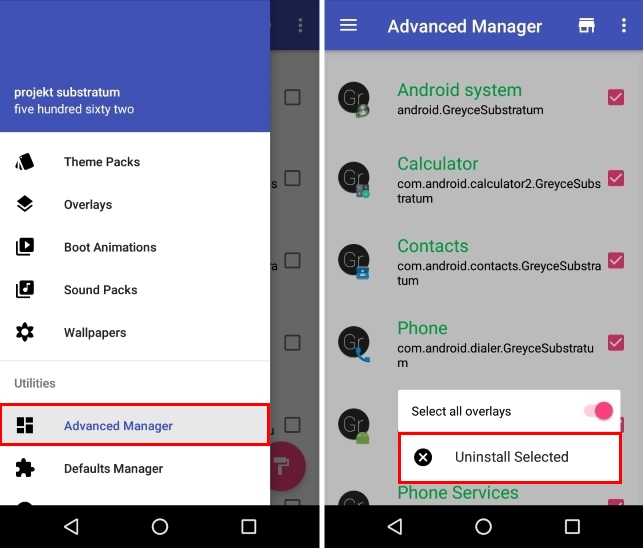 For the set of users out there who have used Cyanogen Mod ROMs, they must be familiar with CMTE, CyanogenMod’s own theming engine. While CMTE thrived as a great theming option for years (probably because it was the only available service of its kind), ever since the introduction of Substratum, CMTE has lost its throne.

Technically, CMTE focuses on completely modifying the code of resource that it themes, as compared to Substratum, which basically places an overlay onto the app. This makes Substratum much faster, easier to use, and way safer than CMTE. Also, with CMTE, it was essential for the user to reboot their device, whereas upon using full Substratum mode, one can dynamically theme their device without the need to reboot. Furthermore, CMTE as a project has been left out ever since Android Nougat, while Substratum’s development continues to grow.

Substratum in itself is a very powerful framework that allows users to dynamically theme and personalize their device. It even has the capability to theme 3rd party apps and not just the System resources, thus literally expanding the user’s theming horizons. Also, ever since Android Nougat was launched, CyanogenMod stopped the development of CMTE. Furthermore, with Cyanogen gone, and LineageOS openly stating that they have no plans to develop a CMTE alternative, it seems evident that Substratum is here to stay.

So, tell us your opinion about the Substratum Theme Manager, and share with us your favorite themes and device setup. After all, customizability in Android, especially with Substratum being there, is only limited to the user’s imagination. Sound off your thoughts in the comments section below.