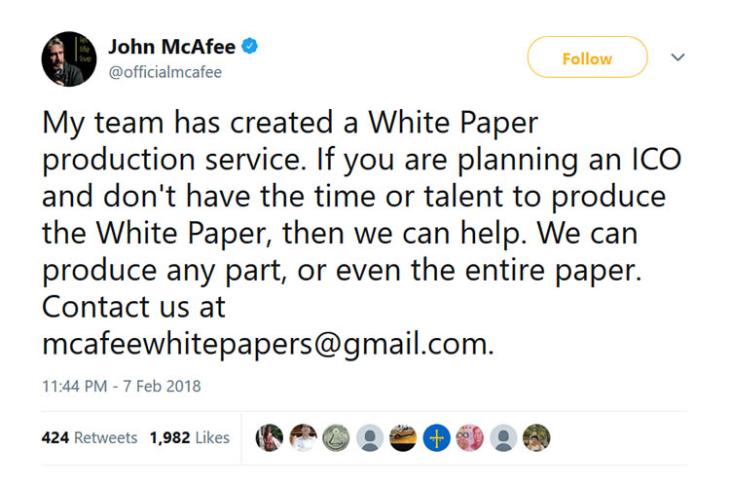 In his tweet, McAfee said, “My team has created a White Paper production service. If you are planning an ICO and don’t have the time or talent to produce the White Paper, then we can help. We can produce any part, or even the entire paper. Contact us at mcafeewhitepapers@gmail.com.”

For the uninitiated, a White Paper for an ICO is a document which details the company’s idea behind the coin offering, the problem it focuses on tackling, an explanation of how the digital currency would work along with the economics involved, the team undertaking the ICO, and the token deployment plan.

A number of people in the comments questioned the need for such a service to which McAfee replied by saying that usually the team offering an ICO is full of developers who have little or no experience of writing White Papers. McAfee’s service aims to help such developers put together a White Paper for their coin offering.

However, Twitter didn’t take the announcement well and as it usually goes down on the platform, McAfee was expertly trolled by a vast majority of people. Here are some of the best comments from the thread:

"don't have the time or talent to produce the White Paper"

Why should anyone lacking in these be planning an ICO -or issuing tokens?

An intriguing idea. #Dogecoin already has a white paper but we are thinking about publishing a green paper or MAYBE even a blue book. Are you able to accommodate these other colors?

I am a developer, writer, thinker & obviously a self-Shiller. Do I stand a chance in this wild crypto world? Check the BrownPaper I wrote, let me know what do you think. https://t.co/AFruthKjN0

In all seriousness though, while McAfee’s argument about developers not being qualified enough to write a White Paper holds true to an extent, the service seems apt for exploitation, given the plethora of scam artists in this field today.

As several users have pointed out, the service is more likely to attract scammers and not problem solvers. Additionally, some have even gone to the extent of calling McAfee himself a scammer, thanks to some unwise Coin of the Day tips, which got him in serious trouble. As one user said: “He used his “mcafee security” background to exploit crypto investors pretending like he had any credibility. He gets paid to pump up scam coins and black mails them. What does this guy know.”