Bluetooth headsets were designed with the idea of giving deez free spirits the liberty to seek the world beyond boundaries set by wires. While my love for wired headsets remains intact, my liking is bent towards Bluetooth headsets, especially when there’s a wide range of good and affordable options including the JBL Endurance Sprint Bluetooth headset. 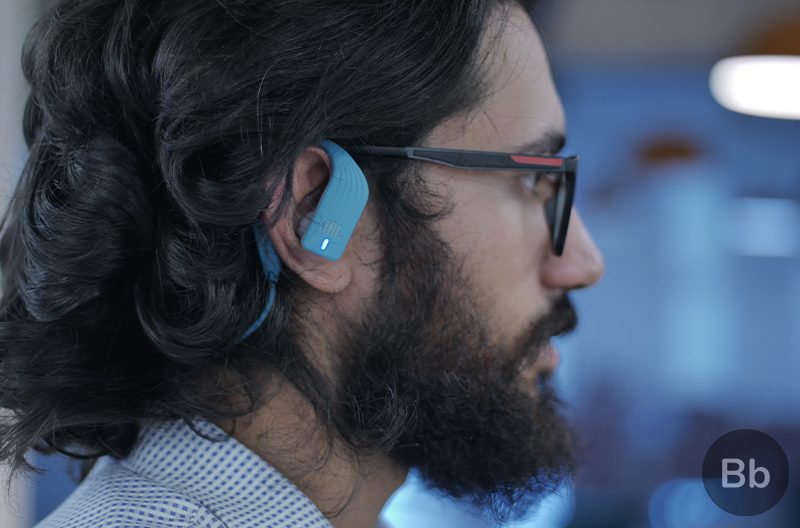 After taking a look the headset’s specifications, let me introduce to what you get inside the box: 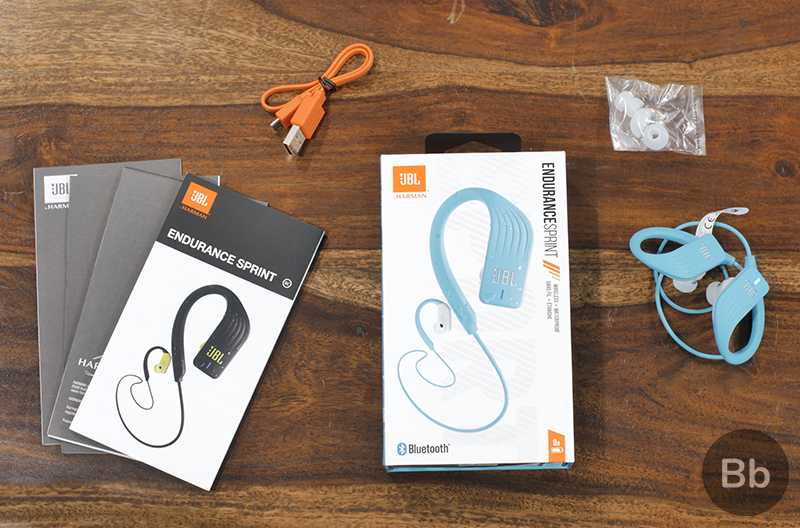 I must highlight that the JBL Endurance Sprint headset is neatly tucked in the vividly painted box, aiming at users who take their fitness routine very seriously. And, while I usually just throw away the user manuals but in this case, I had to pay close attention to the instructions to be able to figure out the touch controls, which I’ll discuss later.

The JBL Endurance Sprint Bluetooth headset has a design ridgy unlike any other commonly known pair of earphones. This, from my understanding, shifts the center of gravity forward and keeps the earphones stable and well planted in the ear despite countless jolts due to running or any other vigorous physical activity. The earbands easily wrap around the cartilage to prevent the earbuds from falling off. 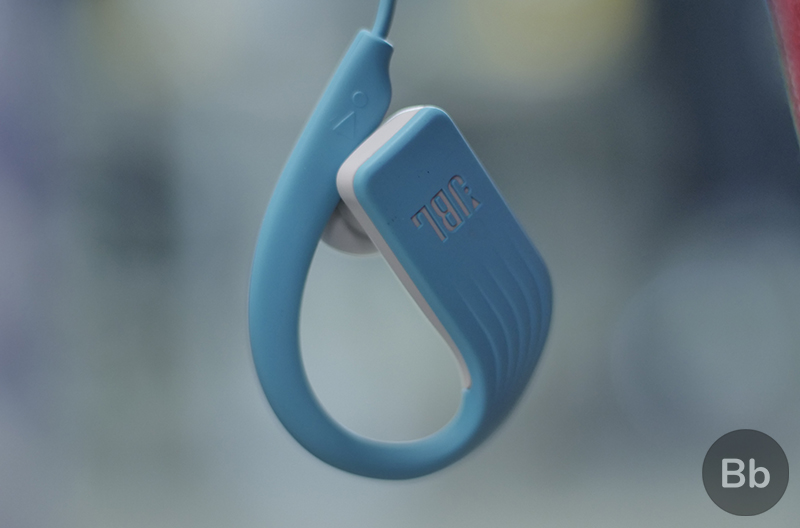 Under the JBL logo on the right earbud, there is a touch-sensitive area which is the sole point of contact for all operations. To switch on the earphones, one must tap and hold for two seconds, or continue holding for five seconds to enter the pairing. Tapping twice on the logo forwards the track while to switch to the previous one, you must tap thrice in quick successions. To turn it back off, the area must be held for two seconds again. 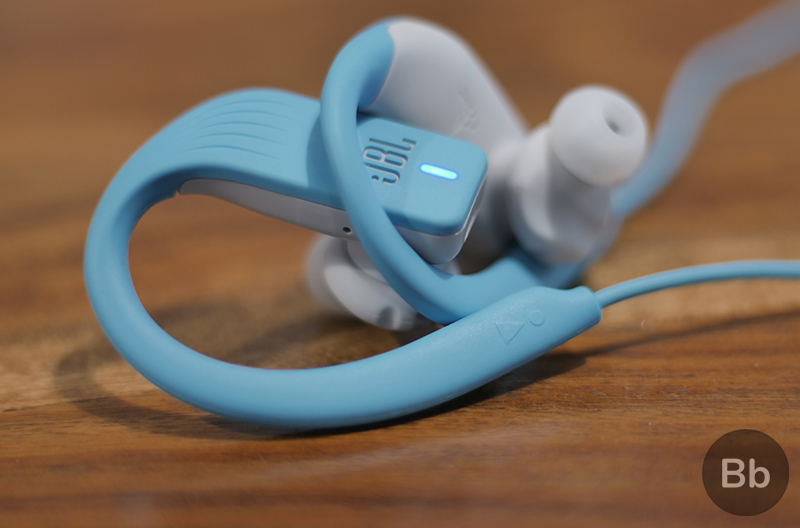 Swiping across the touch area is also how you change the volume of the headset, and to increase the volume, one must swipe upwards from the bottom, whereas swiping in the reverse direction lowers the volume. When I first learned about the feature, I was impressed and amazed but my experience hasn’t been very pleasant I’ll talk about it in the coming sections. 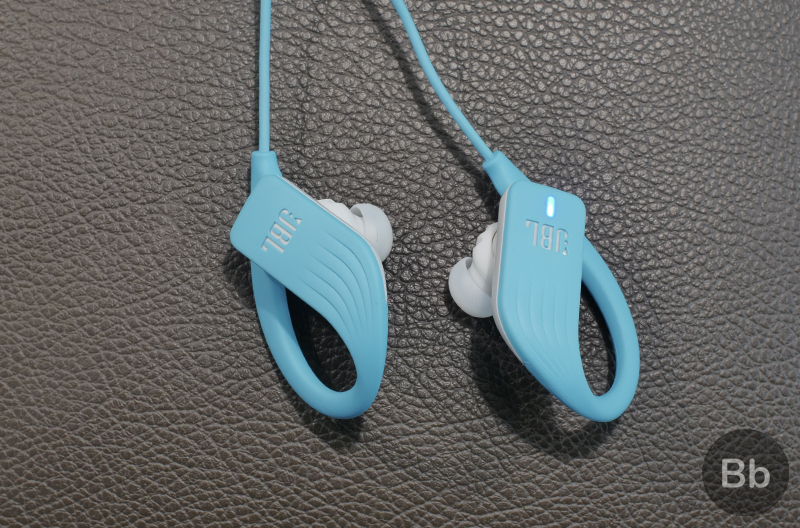 While the build of the earbuds is sturdy and immaculate, there is no neckband which makes they earbuds vulnerable to falling off or sliding to one side due to their weight. While the connecting cable does not feel fragile, I feel a flexible neckband – or at least, a flat wire – would have done justice and added to the better positioning of the headset. I also wish this cable was slightly longer as the current length slightly restricts neck movement. 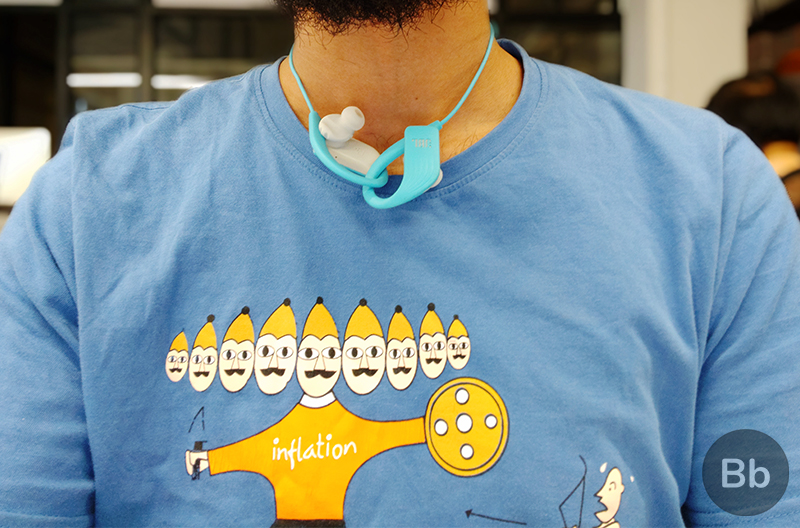 The earbands on the JBL Endurance Sprint come with magnets but I don’t see a utility except for letting me wear the headset like a (poorly chosen) choker. I wish the magnets also helped automate pause when the headset is removed but that doesn’t happen either. At the end of each earband, there is an exclamation mark similar to the one in JBL’s logo and while it may seem to have some function, just like the touch area, it is only for show. 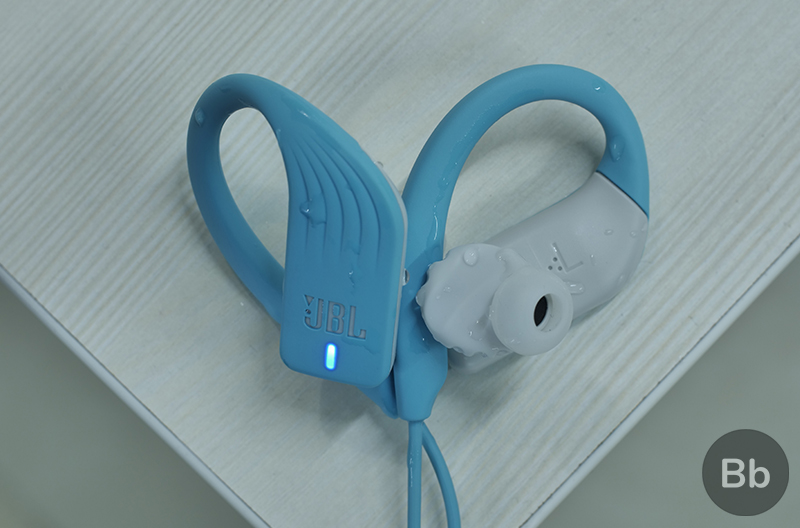 The headset is IPX7 rated for water resistance and while it should prevent sweat or rains from sabotaging your fitness regime, I cannot guarantee that the headset will survive if you swim with. Overall, while I’m delighted by the quality of the earbuds, and don’t find the headset to be bulky, I wish the joining cable felt more secure and sturdy.

Like most people rely on a cup of a fresh brew of coffee or tea for a kickstart, my day inches forward only at the speed of a tortoise without listening to music, and I must say that the JBL Endurance Sprint Bluetooth headset has been a pleasant aide in starting the day better. It recites in a sound replete with the vibrancy of multiple instruments, a calculable rhythm of beats, and striking levels of depth. If my love for the headset is gobbledegook for you, allow me to break it down.

The sound on the JBL Endurance Sprint is mostly balanced and you can easily feel the presence of a variety of instruments but in spite of the difference in their sounds, you get a miscible stew of notes and groove with an appealing musicality. The headbanger in me found it pretty easy to rock my neck almost everytime my jam played. However, if you don’t find pleasure until the music is unbearably loud, the volume on this one will definitely upset you. 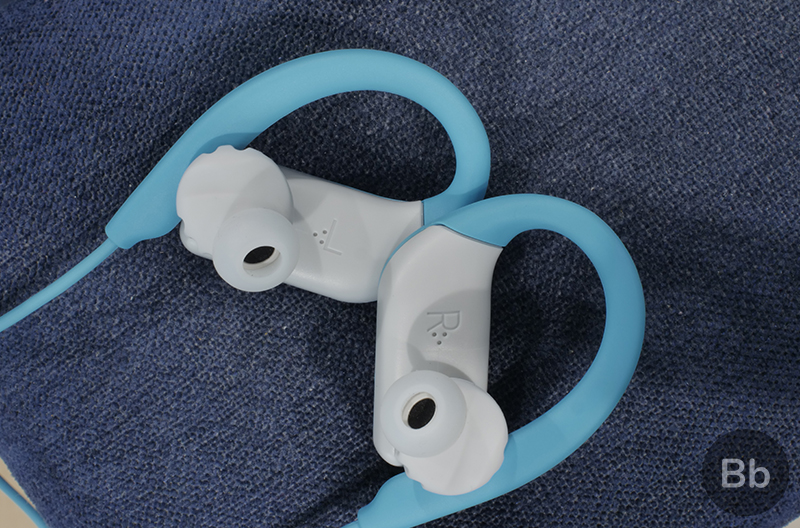 The earplugs do a great job of sealing the ear so there’s no leakage, without actually shutting out the ambient noise fully. This is useful when you’re taking a jog near the road or want to stay alert even during your liberating music or Netflix session. The same could also be the reason why JBL chose to limit the volume.

You won’t find a dose of heavy bass or mind-freezing treble but the quality is justified and appreciable given the utility of the headset. At the same time, the JBL Endurance Spirit does not shy away from pushing its boundaries when you play a tack which is produced with a volume louder than the normal (or if you connect it your laptop) and I’ve heard no squeaking or creaking whatsoever. 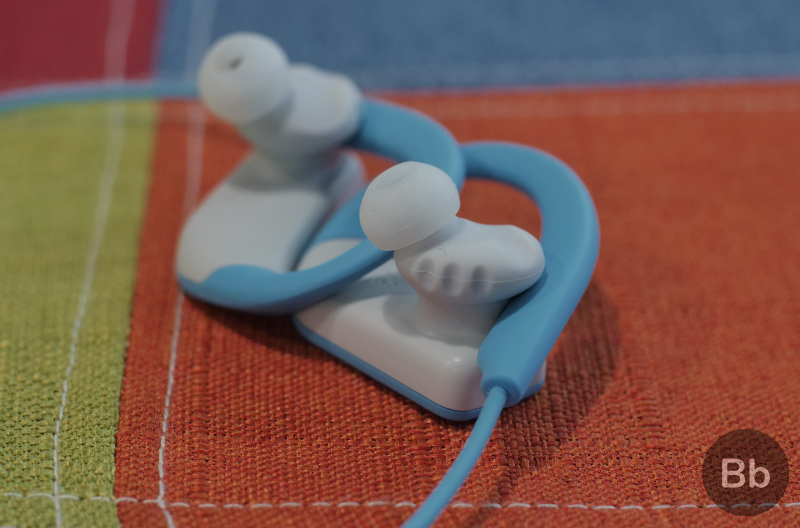 In terms of calling, the JBL Endurance Sprint does a really good job of maintaining clarity. It captures minimal noise from the surrounding and I faced no hiccups while trying to be heard over the phone. The sound is powerful and punchy when listening to commentary or podcasts or watching movies while the background scores can be distinguishably heard alongside the dialogues.

My playlist for this test consisted of Steven Wilson’s call for unity in rebellion through People Who Eat Darkness, Zeppelin’s account of treacherous wanderlust in Kashmir, Opeth’s contemplation over change in In My Time of Need, Linkin Park’s From The Inside, 30 Seconds To Mars’ holler for justice in Alibi, and Jal’s free-spirit bid for liberty in Panchi. Of course, my musical train stopped at many more stations but I reckon these would give you a fair idea of the variation in music.

After laboriously churning out music numbers out of the tiny jukebox, I could manage to get more than seven hours of battery. To ensure that the battery is not wasted, the headset switches off automatically almost five minutes after moving out of the range or disconnecting from the previously connected device.

In terms of charging, the JBL headset takes slightly over two hours to charge completely. If you’ve to rush, 10 minutes of charge can offer almost an hour of battery backup which is great if you often fidget about charging gadgets overnight yet still manage to forget doing it. 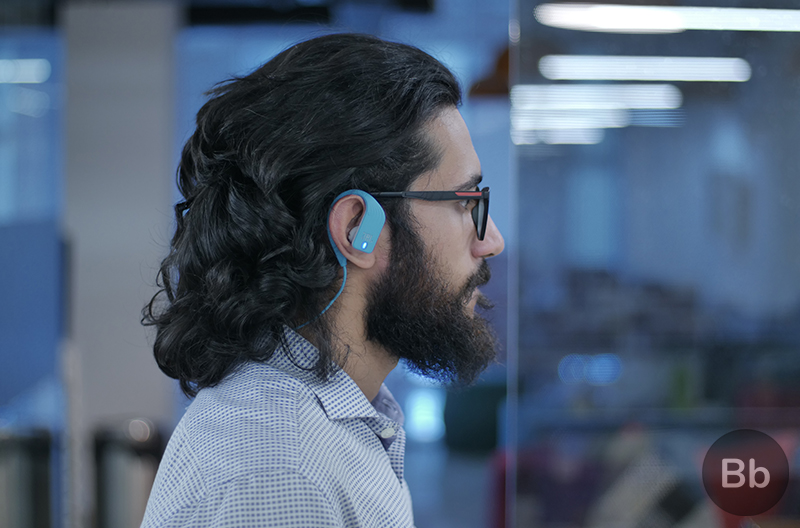 Besides the magnetic wraparound band, the earplugs get an oval design which allows the headset to sit firmly. You can twist the earplugs to lock them inside the ear canal and the strength of this grip depends on the degree of the twist. I had no problem walking or running with the headset but it took me a while trying to figure the ideal angle for the earbuds as I found the headset hurting and crimping the skin inside my ear initially.

The JBL Endurance Sprint easily connects to almost every modern device. The range of reception is great with no interruption in less than 15-20 meters of distance from the source, and that too with a few walls in between. The headset connects back automatically once you move back into the range if the signal was earlier interrupted. However, you must be prompt and be back before the headset switches off automatically. 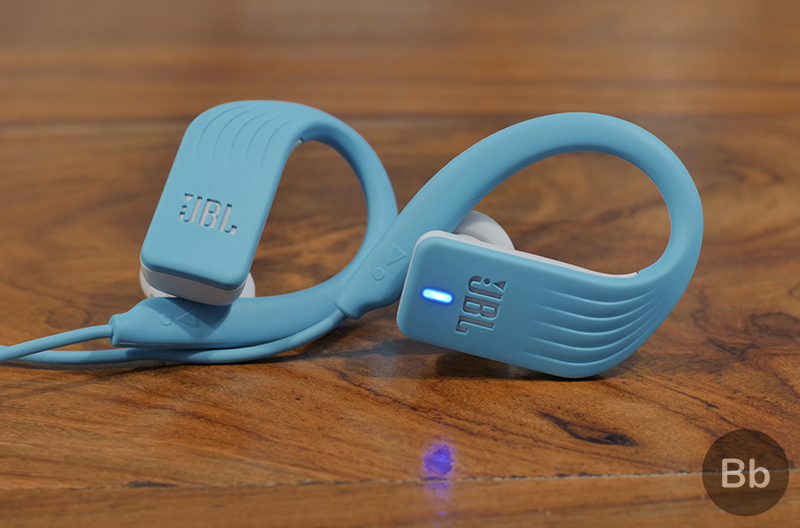 The headset plays a beautiful set of notes when switching on or off as well as plucks, as well as hammer-ons and pull-offs, of an acoustic guitar’s strings which might delight certain users who still prize acoustic instruments. I personally like it because of my love for the instrument.

I am forced to dedicate an entire section to the touch-enabled controls because they turned out to be a sheer disappointment to me. This is primarily because the touch controls, unlike buttons, are not tactile at all and I often found myself twitching to find the right spot to touch. 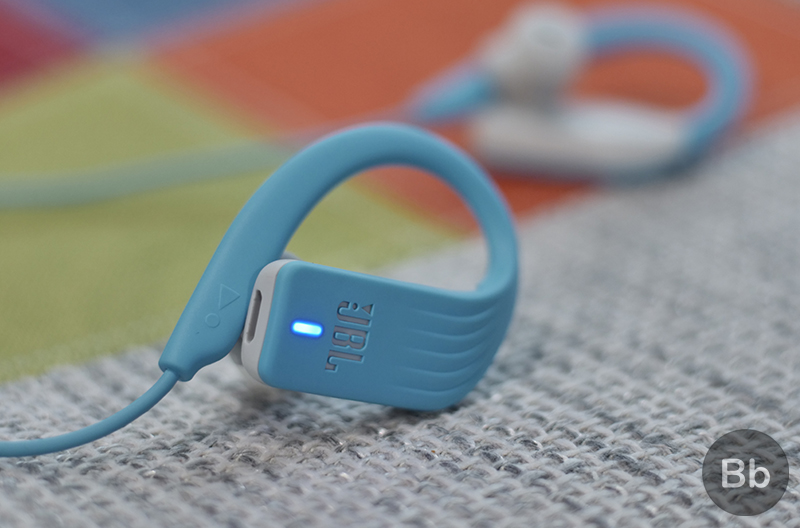 When the headset is switched off, the touch area may not be easily responsive and tapping again and again with the hope it might identify your touch the next time you tap can be annoying. On the other hand, when the headset is switched on, this area is astonishingly sensitive and can even pick up instructions accidentally many-a-times, even if you’re stretching your arms.

The most painful and the hideously worked upon part are the volume controls and the headset gets it correctly only 50% of the times. At many other instances, it ends up confusing the action for the ones for play/pause or track shifting. I wish JBL had gone the usual route and used buttons instead of this painful and unreliable control system.

With a peculiar design and a great sound quality to offer, the JBL Endurance Sprint Bluetooth headset falls among the desirable choices for those who want to spare no chance of compromise en route physical and mental well-being. But it does not mean that you have to necessarily be an athlete or fitness freak to use the headset, which serves delightfully even otherwise.

The only vexing part is the touch control and the cable which does not match up to the quality and build of the earbuds. But those are areas which can be ignored if all that you care about a good sound quality and decent built. Comparing these to the Skullcandy Methods Wireless (starts at Rs 4,399 on Amazon), which I use as my daily headset, and Mi Neckband, I feel JBL has done a good job. It falls slightly short of the OnePlus Bullets Wireless but considering the latter has had very limited stock, I think the JBL Endurance Spirit can be a worthy choice.