What’s in the Box?

The Bullets Wireless come packed inside what can only be called a standard OnePlus packaging — a white box with the OnePlus logo on top. Inside the box you’ll find that OnePlus packs in quite a lot here.

Straight out of the box, my personal favorite item was the bright red colored silicone storage pouch. I’ve always loved the soft finishing on OnePlus’ silicone cases, and this pouch feels the same. The earphones come with the medium-sized earbuds and fins already attached and you’ll find the two additional pairs in small and large sizes under a flap with ‘Never Settle’ printed on it.

My only complaint with the contents of this box is that there’s no charging adapter in the box. 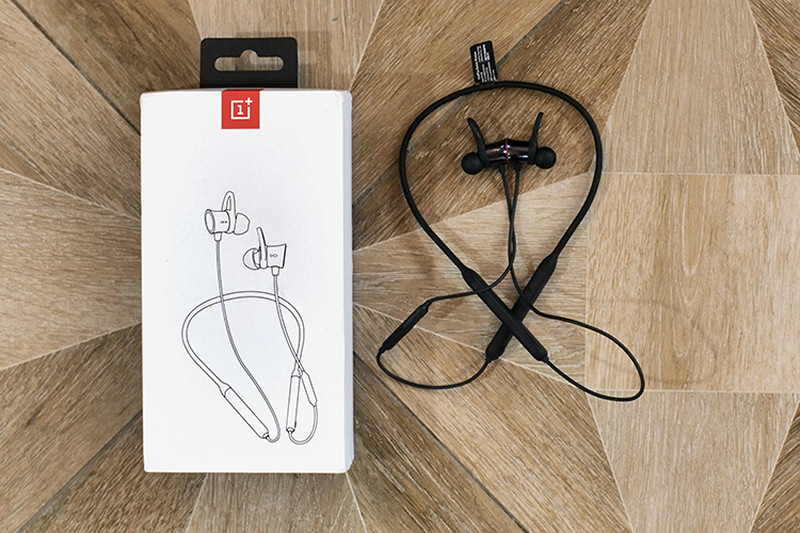 In terms of design, the OnePlus Bullets Wireless earbuds look like every other pair of Bluetooth earphones with a neckband. They have the same rubberized finish that you’ll find on a lot of Bluetooth earphones, the same, thin cable extending to the earpieces themselves, and two (relatively) heavier pieces of rubberized-feeling plastic resting on either side of your neck, carrying the battery and the Bluetooth 4.1 module. 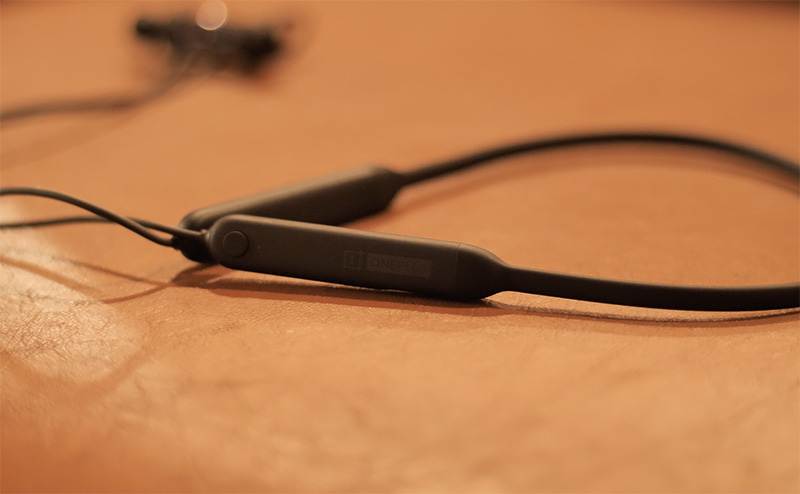 The rubberized finish is something I like, it feels a lot better to the touch, and is perfectly capable of making plastic look like something much more premium. It’s the thin wires that worry me. They feel flimsy, and aren’t really much of a confidence builder. In my time using the earphones, there’ve been a number of situations where I’ve been worried that I’ll break or pull the cable accidentally. Nothing of the sort has happened yet, so the build quality of the cables themselves is possibly better than what it feels like, but I’d still be careful in handling the Bullets Wireless earphones. 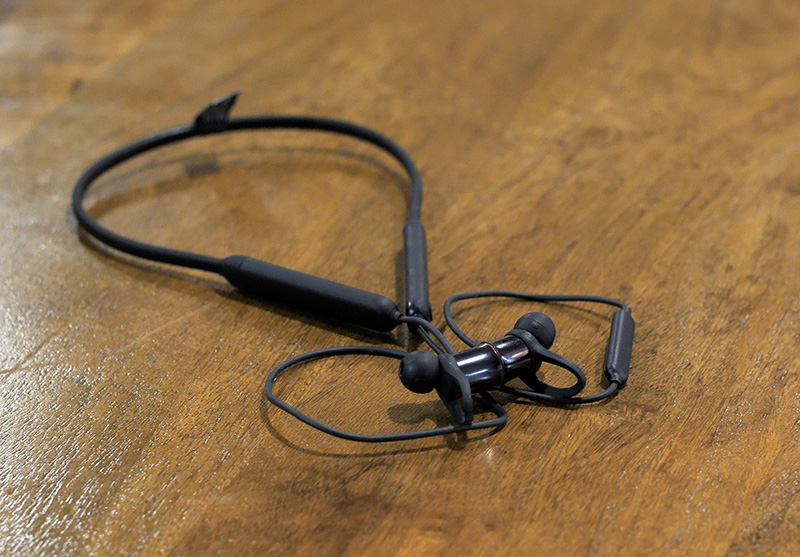 Fortunately, every thing other than the wire feels perfectly well built, including the earpieces which are made out of aluminum and even though they come in what feels like a very basic design, they’re definitely well-built. 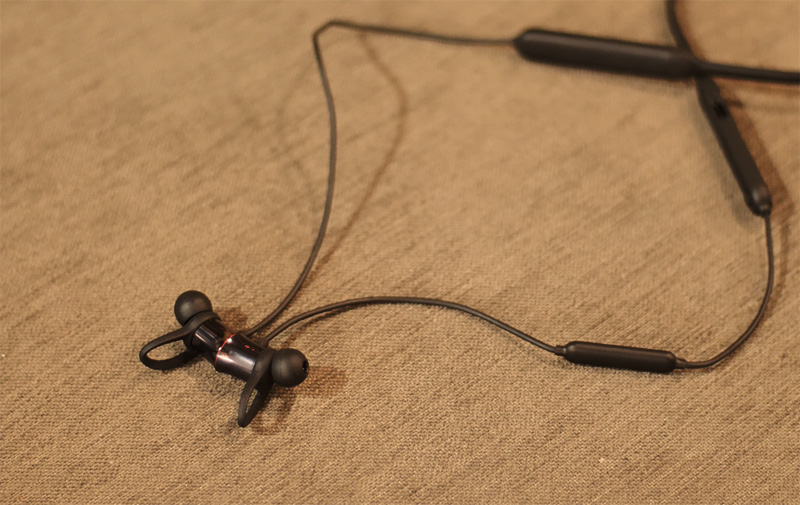 Also, in all my time using Bluetooth earphones, I’ve always been annoyed by the neckbands, but the Bullets Wireless are so lightweight, the neckband isn’t really an issue at all.

the OnePlus Bullets Wireless are the first pair of in-ear earbuds that have tempted me in a long time. 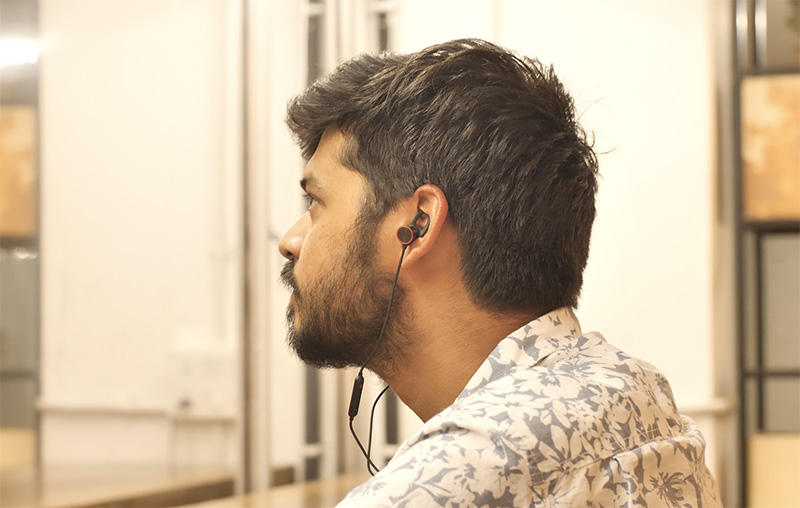 The earphones are comfortable, and thanks to the fins they never once fell out of my ears unless I wanted to take them off. Try as I might, the Bullets Wireless get a pretty firm grip inside the ear and stay in place. I’ve heard some people mentioning that they’re not suited for gym activities, and while I can’t attest to that (having never gone to the gym in my entire life), I can tell you that I tried really really hard to make these earphones fall out and they didn’t.

Sound Quality: Loud, Clear, and Nice All Around

The sound quality of a pair of earphones is pretty much the most important thing about them, and the Bullets Wireless earphones are certainly a pretty great performer in the audio department. Where most earphones suffer from either not being too loud, or distorting at higher volumes, the Bullets Wireless get extremely loud and do not distort even at the highest volume. 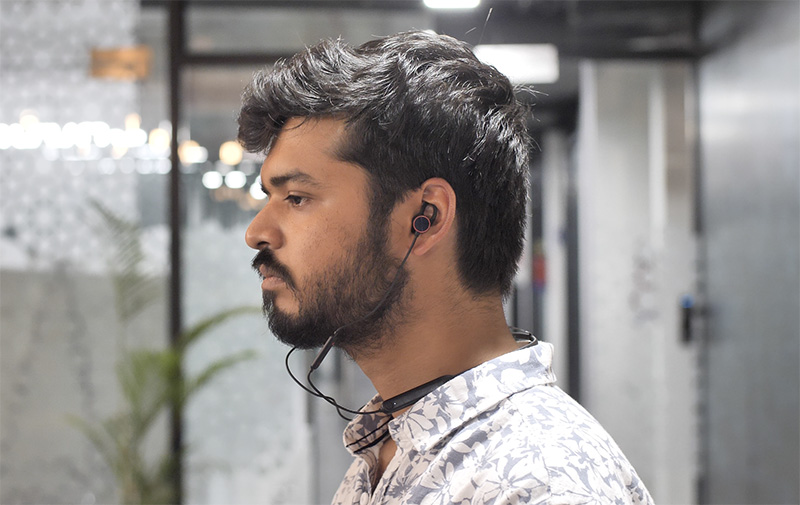 Personally, I found that the sound from the Bullets Wireless was really well balanced, although in some songs it felt like maybe the treble is just a tad on the higher side than what it should’ve been. That said, well balanced sound does come with the caveat that the bass on the Bullets Wireless isn’t incredible. It’s certainly there, and you’ll certainly feel every single beat without a doubt, but if you’re expecting the kind of ear-thumping bass that comes from earphones like the Sony MDR XB55 (₹1,488), you’ll be disappointed. 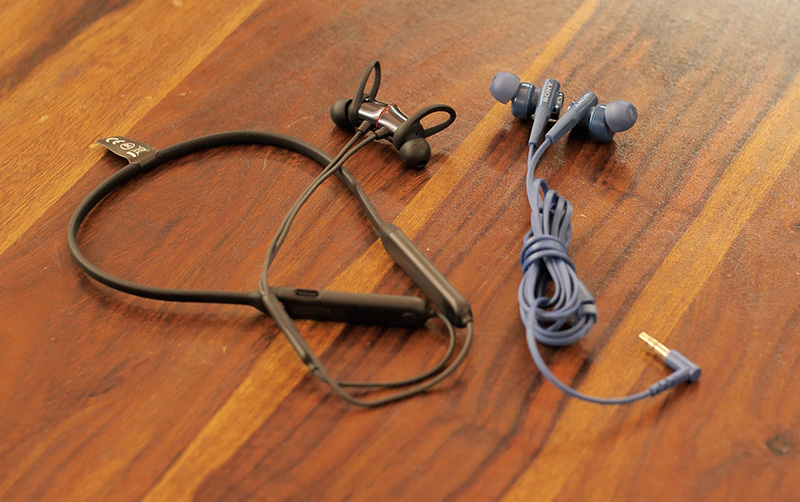 I personally prefer headphones with a higher bass output, which is why my current go-to pair of headphones are the Sony MDR XB950BT (₹12,299), but from a general point of view, the OnePlus Bullets Wireless earphones will not disappoint.

Usability: Magnetic Control Is a Boon and a Bane

When it comes to usability, the Bullets Wireless are pretty great. They’re lightweight, which makes them easy to wear around the neck for as long as you’d like, plus the earpieces magnetically latch on to one another ensuring that the cables don’t get all tangled up when you’re not using the earphones and they’re simply hanging around your neck.

However, the magnetic earpieces aren’t just for handy cable management. No, they offer what OnePlus is calling ‘Magnetic Control.’ With Magnetic Control, whenever you remove the earphones and snap them together, whatever media was playing will automatically pause. Plus, with the OnePlus 5 and above, separating the earphones automatically resumes playback as well, which means that you basically don’t need to touch your phone for these minor tasks. 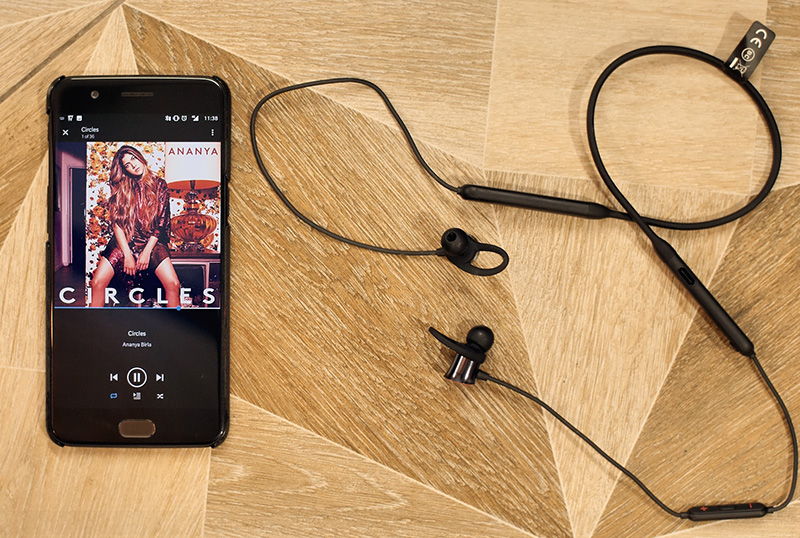 While the software update required to enable the auto-resume feature on the OnePlus 5 isn’t yet available on my phone, I tried the earphones with Rupesh’s OnePlus 6 as well, and the auto-play certainly works well.

That said, all is not gold with the Magnetic Control here. One thing I noticed was that snapping the earpieces together didn’t pause playback; instead, the earphones simply disconnected from the phone. Now that’s fine. However, anytime the earphones are separated, they try to auto-connect to the device they were last connected to, and this becomes an issue if you’re like me and you keep the Bluetooth on your phone on all the time. A lot of times I turned on my car, expecting my phone to connect to it, but the Bullets Wireless had separated inside my bag and connected to my phone, preventing it from connecting to my car. That simply sucks. Plus, you can’t turn off the earphones, because as soon as they’re separated, they turn back on and start auto-connecting again.

When it comes to connectivity, the OnePlus Bullets Wireless earphones come with Bluetooth 4.1, along with support for Qualcomm aptX HD which means a better sound quality, lower latency, and more stable Bluetooth connection with supported devices. 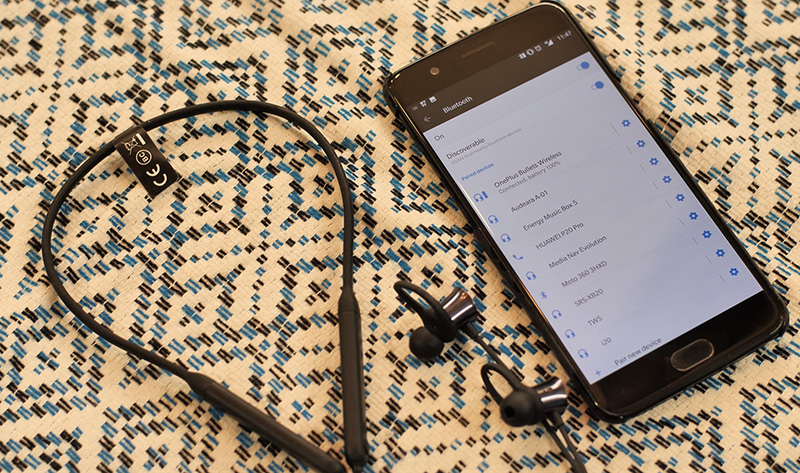 The earphones pair just as easily as any other pair of earphones do, and once they’re paired they do maintain connection pretty well. According to the company, the earphones have an effective range of 10 metres, but I found it to be around 6-8 metres in normal circumstances with general obstacles like glass-walls, people, and other stuff. 6 to 8 metres of range isn’t too shabby, and at least the way I use earphones, I don’t need anything more than that anyway so that’s fine with me.

The Bullets Wireless features a battery that OnePlus claims lasts up to 8 hours of continuous playback, however, in my testing I found the results to be rather underwhelming. With a full 100% charge to start with, the Bullets Wireless last around 5 and a half to 6 hours playing music at around 70% volume.

That said, the earphones do come with OnePlus’ Dash Charge and if there was one claim I found to be completely true, it was the 5 hours playback on a 10 minute charge. I completely drained the battery of the earphones and charged them for 10 minutes and they had crossed 80% charge in that time. That’s insane, and to be honest, completely in line with I expected from Dash Charge. 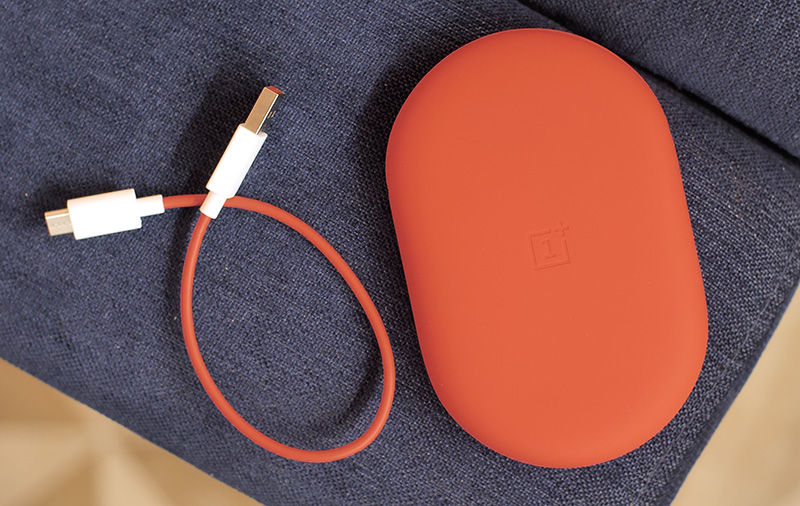 The charging cable OnePlus includes in the box comes in this gorgeous red silicone pouch that I especially love. It’s a storage pouch, and I figured out that you could stuff the earphones inside them, although it’ll really have to be a ‘stuffing’ because they don’t fit inside it easily. 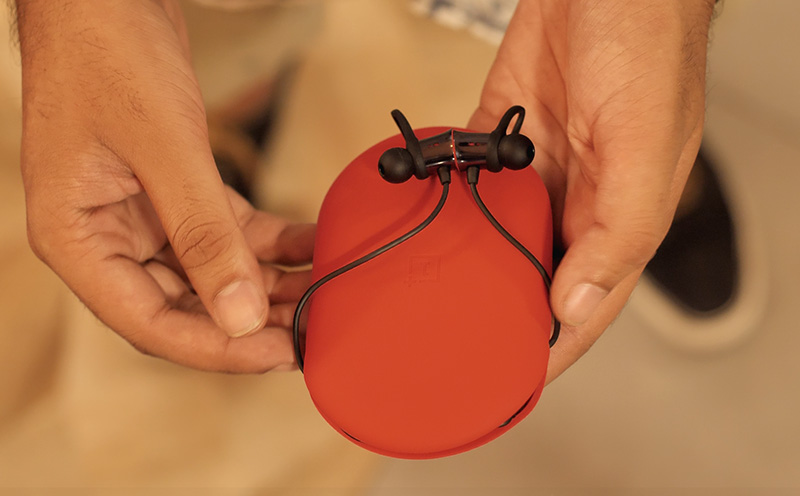 The earphones don’t come with active noise cancellation or anything fancy like that, and honestly that’s fine. They have a pretty decent passive noise isolation going on with that great in-ear fit, and ANC would’ve just ruined the battery life.

The OnePlus Bullets Wireless are definitely one of the best earphones in their price range, but like all things, they have their pros and con, so let’s break them down.

All things considered, the OnePlus Bullets Wireless are honestly the best earphones in their price range, with features such as the ones they have. At ₹3,990, they might seem pricey at first, but they bring a ton of features you’ll not find in Bluetooth earphones in the same price range. I mean, take for example the Skullcandy Ink’d Bluetooth earphones; these are priced at around ₹3,500, and while they too claim a battery life of 8 hours, they don’t come with magnetic control, or any sort of fast charging. JBL also has the JBL E25BT earphones that come with 8 hours of battery life, but they too don’t have any features like magnetic control, or fast charging while being priced at roughly ₹3,000.