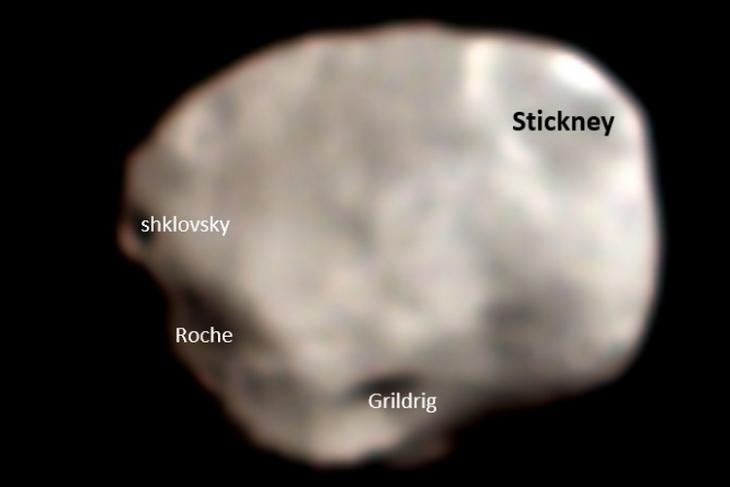 The Indian Space Research Organisation (ISRO) on Friday shared an image of Phobos, the closest and biggest moon of Mars. The image, as seen above, is a composite of 6 distinct frames. The images were snapped July 1st by the Mars Colour Camera (MCC) onboard the Mars Orbiter Mission, otherwise known as ‘Mangalyaan’. The Mars Orbiter was about 7200 km from Mars and 4200 km from Phobos when the images were taken.

Phobos is largely believed to be made up of carbonaceous chondrites. According to ISRO, “The violent phase that Phobos has encountered is seen in the large section gouged out from a past collision (Stickney crater) and bouncing ejecta”. The image also shows Stickney, the largest crater on Phobos. Some of the other craters seen in the photo include Shklovsky, Roche & Grildrig.

A recent image of the mysterious moon of Mars, Phobos, as captured by India's Mars Orbiter Mission

ISRO launched the Mangalyaan mission on November 5, 2013, aboard PSLV-C25. The vehicle entered the Martian orbit on September 24, 2014, in its first attempt. That created history of sorts, as it made India the first country in the world to successfully reach Mars on its first attempt.

The primary objective of the mission is to develop the technologies required for designing, planning, management and operations of an interplanetary mission. The secondary objective is to explore Mars’ surface features, morphology, mineralogy and Martian atmosphere using indigenous scientific instruments.

It took Mars Orbiter 323 days to reach its destination. Once it was successfully inserted into orbit, it was welcomed by NASA’s Curiosity Rover. The feat was also lauded by Elon Musk and noted astrophysicist, Alan Duffy. The Mission’s life was expected to be six months, but is still going strong, even after almost six years.