Skip to content
Home Tech iOS 10 Vs. iOS 9: What Has Changed?

iOS 10, the latest iteration of Apple’s mobile operating system went live as a Public Beta recently, bringing with it a host of bug fixes from the Developer Beta and new features and improvements from iOS 9. I have tried the iOS 10 Public Beta hands-on, and it looks promising; Apple might finally be heading towards achieving a perfect balance between design choices and UX on iOS. It’s not perfect, but they’re definitely getting closer. That’s definitely one good thing about Apple, they accept where their products fall short, and try to improve upon that in newer updates. iOS 10 looks like it has finally fixed a lot of issues from its predecessors, and introduced some that irk me.

Read on to discover the top new features and changes introduced in iOS 10 compared to iOS 9, and my thoughts on the changes.

At the WWDC, this year, Apple announced a host of new stuff. If you don’t remember the details, or if you live under a rock, check out our article on WWDC 2016. Among the various iOS 10 features introduced at the event, there was one that immediately drew a huge round of applause from the attendees: stock apps can be removed from iOS 10. 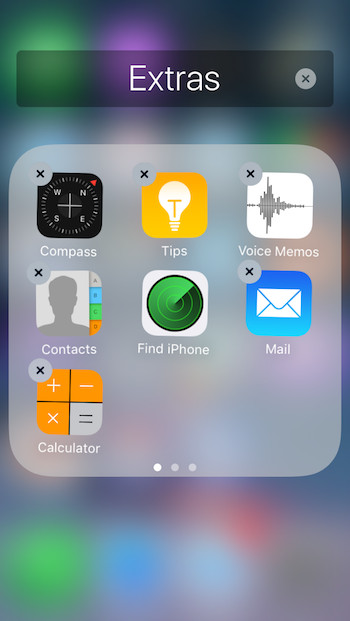 Turns out, they aren’t actually “removed” from the device, per se; they are only hidden from sight. Even that, in my opinion, is a good start, we don’t have to have that “Extras” folder with the unused apps anymore. Before you get super excited and uninstall every stock app that you never use (Maps, anyone?), remember that if you remove Maps, you won’t be able to open map links on your device anymore, because Apple, being Apple, does not yet allow us to set third party apps as default apps. Bleh.

Still, like I said, it’s a start; at least my home screen looks less cluttered now.

Except the fact that notifications display a lot more information than their iOS 9 counterparts, I’m unimpressed by the new notification style in iOS 10.

Swiping right on the Notification Center reveals the “Today” view, which is full to the brim with those bulky looking cards. I was extremely disappointed by this design choice, but I’m hoping it’ll grow on me.

The Notification Center in iOS 10 also has a “Search” option now, which is definitely an improvement.

Apple has finally started paying attention to the Control Center, and has started removing the clutter, making it more manageable and intuitively designed… kind of.

Swipe up from the bottom of the screen to reveal the Control Center and you will immediately notice a couple of big (welcome) changes. The toggles for various connectivity options such as WiFi, Bluetooth and Airplane Mode are now coloured. That doesn’t really translate to better performance, but it does add up to a vibrant UI. Also noticeable by only their absence, are the Music controls.

If there is one thing missing in the Control Center in iOS 10, it’s the ability to customise the controls that are available. I, for one, have no use for AirPlay, as I don’t use it. It would be better if I could use that space for something like a toggle for “Personal Hotspot”.

Apple has made a plethora of changes to the iOS iMessage app, and while most of them will quickly fade away as the novelty wears off, they are still pretty cool, as features go.

iMessage now allows you to send handwritten messages, that will animate on the receiver’s screen exactly the same way that you scribbled them. You can also send hearts, kisses, broken hearts etc. In short, Apple has your love life covered. Jokes aside, the features themselves are rather interesting, and I’m sure you’ll all try them out, even if you don’t find too many uses for them. You can also send invisible messages now, that have to be swiped to be seen. So, next time you want to surprise someone, you can just send them a message with invisible ink. This is a feature some fear might be used in a, well, not entirely decent manner, but all we can do is hope.

Also among iMessages new features is the introduction of an “in-iMessage-app store“. This basically means that you will soon be able to book movie tickets or reserve tables at your favourite restaurants directly from the iMessages app.

The Notes app in iOS 10 has a new collaboration feature which allows you to share a link with people over email, messages etc., which will allow them to view and edit the note that you shared the link for. This is better than the “share” option that was available earlier. The share option is still available, if you need to use it. However, collaboration in Notes is a good idea for teams that are working on an idea, or even for a group of friends trying to plan out an itinerary for their next trip. It’s just easier to view and edit a note that is visible to everyone and editable by everyone in the group. 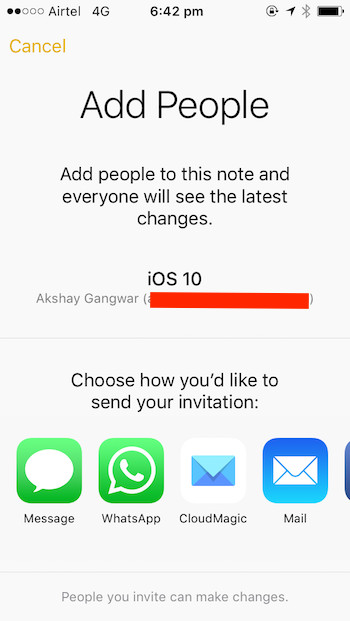 The new iOS update also makes keyboards intelligent. You can now type anything on the keyboard and tap on words that you want to replace with emojis, and the keyboard will automatically suggest them to you. Simply tap to replace the word with the emoji, and you’re done. Typing messages that your parents can’t ever understand is now easier than ever, thanks to Apple. To be honest, this feature is probably only useful for teenagers, or to annoy your friends and co-workers. 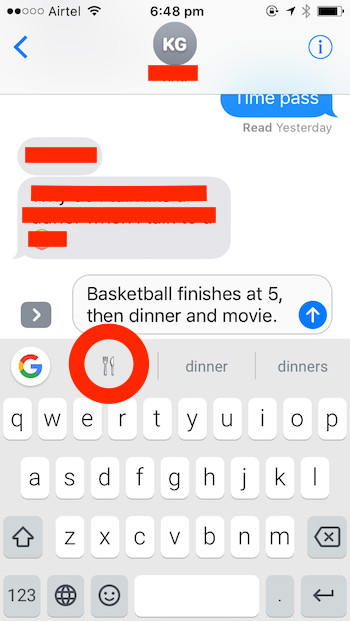 When Apple launched the iPhone 6s and 6s Plus, the fingerprint sensor on the home button was so fast, that people couldn’t even look at the notifications on the lock screen before the iPhone unlocked itself. Who said faster computers are always better? Anyway, making the sensor slow would have been taking a step back, so Apple decided to figure out a different solution to this problem. Instead of having to press the home button, or the power button on your iPhone to turn the screen on, you can now simply raise your phone, and the screen lights up, letting you view your notifications without accidentally unlocking the phone.

This feature is only available in iPhone 6 and later, because these phones have their motion co-processor embedded with the processor, making it more power efficient to constantly monitor all the sensors the iPhone packs. While Apple could have easily enabled this feature for older phones, such as the 5s, it would have resulted in a massive drop in battery performance of the phones.

The first thing I noticed on the lock screen was that there was no “swipe left to unlock” screen available anymore. If you want to unlock the phone by typing your password, you’re out of luck. Also, swiping up for the camera has been replaced with swiping left for the camera. That’s all well and good, but once you’re in the camera, you can’t swipe back to go to the lock screen; you have to press the home button. That is a sad oversight by Apple.

Another annoying thing I noticed on the lock-screen, is how unpredictably the “fingerprint scanning to unlock” works. Sometimes, the device unlocks the way I feel it should, just press your finger on the scanner and the phone gets unlocked. Other times, the phone unlocks on pressing the finger on the scanner but still requires me to press the home screen again to actually remove the lock screen from view and go to the home screen. It definitely has a reason to do this, but I can’t figure out the conditions under which the behaviour changes.

SEE ALSO: Moving From Android to iOS? Here’s Everything You Should Know

Overall, I feel that iOS 10 has a lot to offer, and a lot to add to our everyday experience on the iPhone, iPad and iPod. It has a number of new features, and it fixes a lot of the UI choices Apple made in the previous iterations of iOS. As far as the beta goes, it performs exceptionally well, and apart from a few glitches, it seems like Apple is getting very close to a perfect iteration of iOS.

If you have an extra iOS device lying around, you should definitely install the iOS 10 Public Beta on it, and experience the changes coming to iOS this fall. If you encounter glitches, or discover features you think need tweaking, use the feedback assistant provided by Apple to report it. Apple really does listen to user feedback, and encourages beta users to use the feedback assistant extensively. Let us know about your experience with the iOS 10 Public Beta, and if you find new features that we might have missed, make sure you let us know in the comments section below.