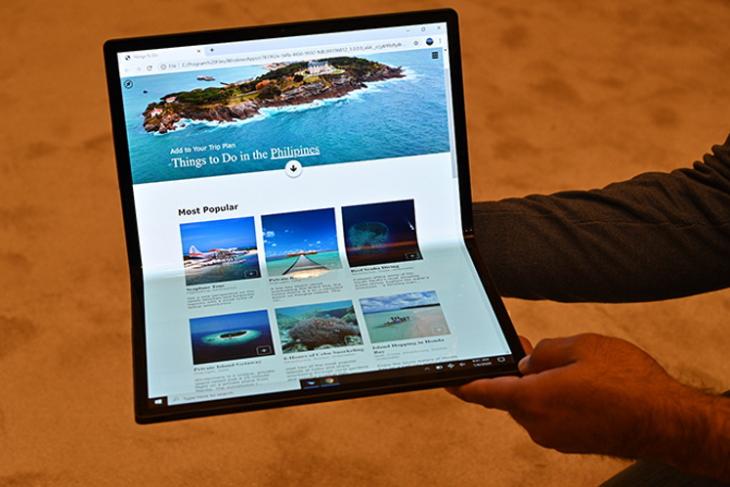 Alongside the reveal of its new 10nm Tiger Lake architecture, Intel has given us a quick sneak peek at what the future of PCs may look like. Here’s the Horseshoe Bend concept, which was unveiled at CES 2020, and could lead to the birth of foldable Windows 10 PCs over the next few years.

Intel’s Horseshoe Bend features a massive 17.3-inch AMOLED foldable touchscreen display (with a 4:3 aspect ratio when the display’s unfolded), providing users one of the most immersive PC experiences on the move. The display size shrinks down to 12-inches when folded. The company has also baked a Microsoft Surface-like kickstand on the rear, which will allow you to prop up the foldable display.

Intel’s Horseshoe Bend concept is the world’s first-ever 17-inch foldable AMOLED PC. It’s unlike anything we have seen and sits alongside the Lenovo ThinkPad X1 Fold to carve out a new foldable PC category.

Though the official blog post doesn’t reveal much about the Horseshoe Bend, a slew of publications got hands-on time with the concept. It boasts a 7mm thickness (and you’ll notice a crease down the middle) and is powered by Intel’s new Tiger Lake architecture, which will ship in laptops later in 2020.

The prototype shown off by Intel on stage was running the standard Windows 10 OS but the company sees the slimmed-down Windows 10X (first revealed at Microsoft’s Surface event last year) a more capable fit for its foldable concept. You can access the on-screen keyboard on the foldable display but attaching an external keyboard and mouse will give you a more desktop-like experience.

Horseshoe Bend is merely a concept for a foldable PC future, which is also one that could come to fruition – followed by mass-adoption – before foldable smartphones. We already have the Lenovo ThinkPad X1 Fold among us if you’re interested in getting a taste of the future. But, you also have to be ready to write a massive check for the same.