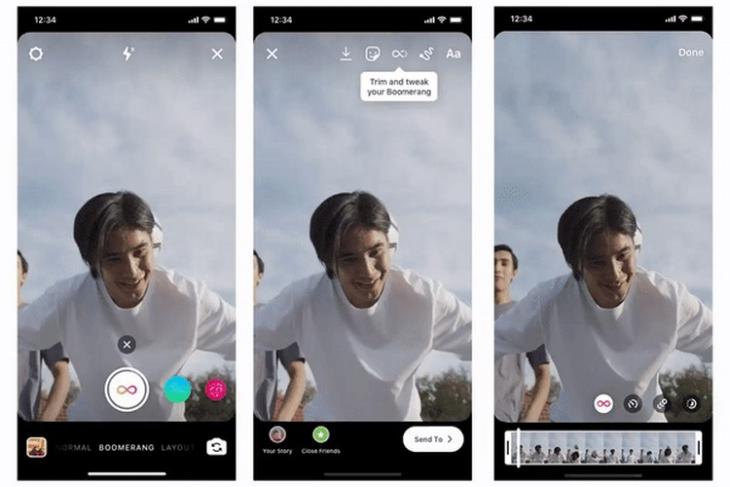 As part of its plans to better compete with the runaway success of TikTok, Instagram has rolled out three new options for users to share Boomerangs on the platform. Earlier, the company had started fact-checking Instagram Stories to reduce fake news on its platform, and now the company is adding a more fun-oriented feature to its app; users will now have three new options called SlowMo, Echo and Duo in Boomerang stories. Alongside these, the company is also rolling out the ‘Edit’ feature in Instagram Stories, enabling users to trim their length as they deem fit.

In an official statement announcing the new features, the Facebook-owned photo-sharing company said: “Your Instagram camera gives you ways to express yourself and easily share what you’re doing, thinking or feeling with your friends. Boomerang is an iconic part of that, and one of the most beloved camera formats. Instagram is excited to expand on the creativity and give you new ways to use Boomerang to turn everyday moments into something fun and unexpected”.

Boomerang has new creative twists that'll make you say yaaassssss. Try them all out today. pic.twitter.com/wp0A71RefL

As its name would suggest, the Slow-mo feature allows users to slow down the speed of their videos, while Echo adds a ‘motion blur’ effect to the original Boomerang videos. As for Duo, it can either speed-up or slow-down Boomerangs and add what the company called “a textured effect” to the videos.

It is worth nothing that these features will only be available on Instagram Stories and not the Boomerang app. They can by accessed by shooting a Boomerang video and then selecting the editing option denoted by an infinity loop icon. While it typically catches just a second’s worth of video footage that’s replayed in a GIF-like loop for six seconds, the new effects will add some much-needed appeal to deal with the monotony of standard Boomerangs.