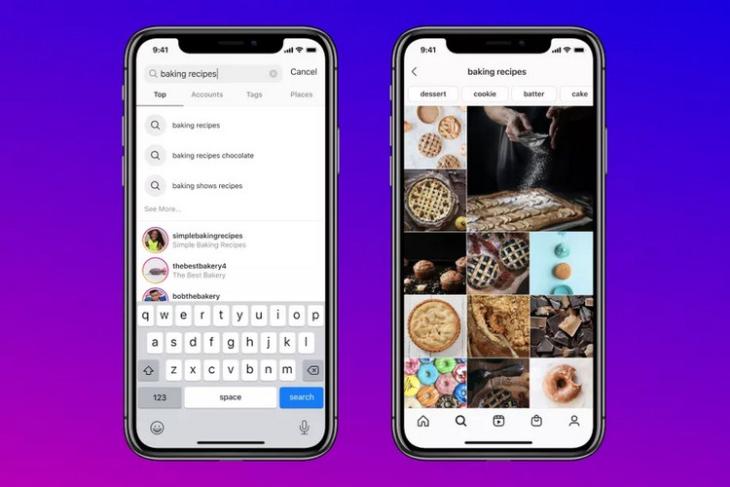 In a move that is expected to significantly increase the scope of the search functionality on the platform, Instagram is letting users find content by keywords for the first time. According to The Verge, the feature is rolling out to all users in six countries, including the UK, US, Ireland, Australia, New Zealand and Canada. It will, however, only be available in English, with no definitive timeline on when it might be rolled out in other regions and in more languages.

Up until now, the service only allowed users to search for hashtags, usernames and locations, but the new addition will now enable users to find posts about particular subjects, like ‘baking recipes’, ‘backyard gardens’, etc. Before today, users searching for the above keywords or phrases would only yield results for posts that tagged those same words or usernames that had variations of those words. Now, however, users will be able to see results for posts that are actually about the searched topics, even if the specific hashtags are missing.

Instagram, however, is seemingly restricting search on politically sensitive topics in the US, with the report suggesting that the functionality is unavailable for keywords like ‘Trump’, ‘Biden’, ‘QAnon’, etc. There’s no official word on whether that’s likely to change once the heated political atmosphere in the country cools down somewhat with the swearing-in of the new administration in January.

Meanwhile, it’s not immediately clear as to how exactly the keyword search will work, but an Instagram spokesperson reportedly told the publication that the company considered a number of factors, including the “type of content, captions, when it was posted” and more, while determining the most relevant posts for a particular keyword. The report suggests that the algorithm might still be a work in progress, but it’s likely to improve going forward.

Alongside the enhanced search option, Instagram is also expanding the scale and scope of its ‘Guides‘ feature that allows creators to share tips, resources and other long-form content via a dedicated tab on their user profiles. Originally rolled out last May, the feature was initially limited to a select group of influencers, but is now being rolled out to all users. Alongside mental wellness, it will now also include other types of content, such as Products, Places and Posts, the company said.