Instagram recently added six new Superzoom effects to help users spice up their Stories, but that update brought another nifty feature in tow. The image-sharing platform is now making it simpler for users to comment on posts with the addition of an emoji shortcuts bar to its mobile app.

As tweeted out by the company’s official account, the platform now hosts a personalized emoji shortcuts bar in the comments section of the feed- right above the comments text box. It gives users access to 8 of their most frequently used emojis, thus, making it handy for them to comment cute faces, hearts or the puke emoji in a matter of seconds.

That feeling when your favorite emojis are right in front of you 🙌😍 pic.twitter.com/QPF8eGc5yD

You can now simply tap the comments icon under a post in the feed and tap on the emoji you like and hit send, that’s it. It’s now that easy to engage with people on the platform. However, do remember, tapping the emojis does not automatically post it as a comment but adds it into the comment box.

As you can see in the screenshots below, the emojis appearing in the shortcuts bar are personalized and will be different for each user. 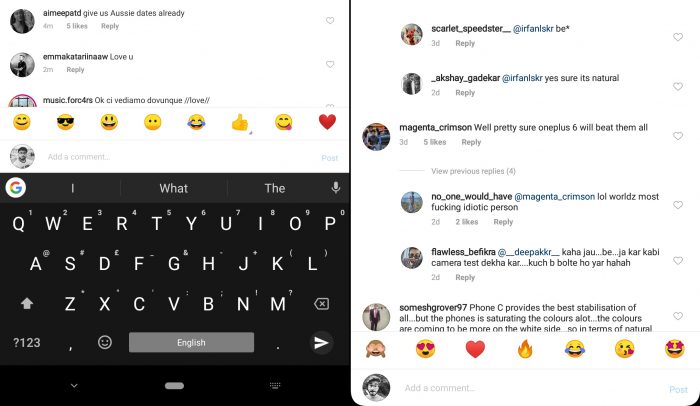 Instagram doesn’t want you spamming users or sending them random replies. This emoji shortcut bar was under testing for weeks and is finally rolling out to everyone. It’s only available in the feed for now and not your Stories (which already has emoji reactions) or DM replies. So, how do you like the emoji shortcuts bar? Let us know in the comments down below.